The capital of art and university

Flanked by the River Tormes, with the outstanding towers of the temples on the river, this treasure has a lively atmosphere because of the 27 000 students of the university.

What to see in Salamanca

Things to do in Salamanca normally involve sightseeing the main sights and enjoying the city’s amazing gastronomy. Our visit starts in Zamora’s Gate, near the San Marcos Church (12th century), a Romanesque temple housing Gothic paintings from the 14th century. If you keep walking via Zamora street, you will reach San Boal church and the Spanish-Japanese Cultural Center. Going further in this direction, you will finally get to the Plaza Mayor (1729-1755), which was designed by Churriguera in a Baroque style and has representations of kings, heroes and historical figures. This plaza is the heart of Salamanca, both during the day and the night; it has several stores and cafeterias. Next to the plaza, we highlight San Martín church (Romanesque style from the 12th century, which holds inside an altarpiece from 1731 by Churriguera).

If we continue via Rúa Mayor we will get to the Conchas House (15th century), which mixes Gothic and Renaissance figures. Its façade has more than 300 shells; and the courtyard cannot be missed: a mixture of Gothic, Mudejar and Renaissance styles (a library nowadays). At the opposite side of the street we find the Clerecía (17th-18th centuries), a Baroque building which includes the church, the school, and the residence of the old Jesuit College (headquarters of the Universidad Pontificia). Among the many treasures this construction has we can highlight the numerous paintings dealing with the life of San Ignacio of Loyola.

Close to the Clerecía we find the Libreros street, which leads to the University (set up in 1254 by Alfonso X). The main attraction of this building is its façade, carved in stone with shields of the Catholic Kings, the Imperial Shield of Carlos V, and the famous frog (which, according to the legend, those students who can find it in the façade will pass their exams). Among other attractions placed here are Fray Luis of León Room (16th century) and the Library, which has more than 40 000 volumes previous to the 19th century.

The bridge above the River Tormes still preserves 15 arches from the Roman period (1st century AD), and in the center it holds the Iberian boar, in reference to the picaresque novel El Lazarillo de Tormes. Next to this bridge, you can see the Santiago church (Romanesque-Mudejar style, 12th century) and the Documentary Museum of Historic Memory, dealing with documents from Republican side during the Civil War (1936-39).

Among some museums you cannot miss are Unamuno House-Museum, where the writer used to live from 1900 to 1914; the Salamanca Museum, also known as the Fine Arts Museum, which shows paintings from the 14th century onwards; the Art Nouveau and Art Decó Museum housed by Lis House(1905); the Epicospal Palace (18th century), which house the Museum of History of Salamanca. 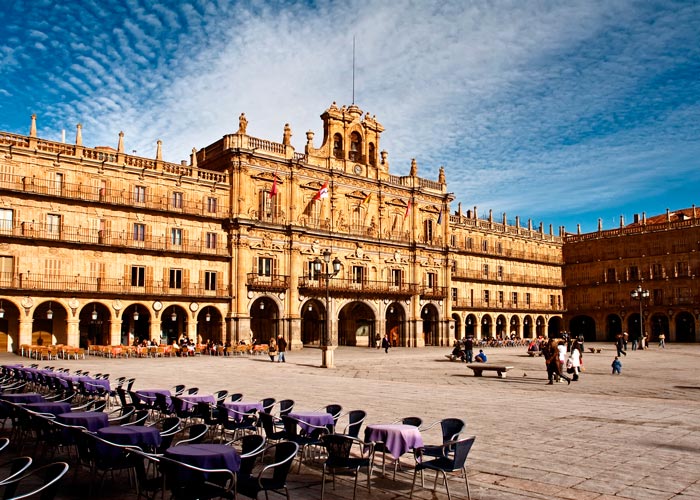 Before entering the Old and the New Cathedrals, we can witness the outstanding presence of the Patio Chico or go through the Anaya Palace, nowadays the Faculty of Humanities, and San Sebastián church (built by Alberto Churriguera in 1731). If you keep walking via San Pablo street, you will reach to the Dueñas Convent, San Esteban Convent, the Kings Cloisters, and the Sacristy.

If you go back to the Compañía Street, you will reach the Gothic San Benito Church (15th century) and Monterrey Palace, which is one of the most representative pieces of the Renaissance period (built in the 16th century and unfinished because of economic problems). A bit further away you can visit the Muertes House (16th century), so called because of the numerous skulls in the windows. The contiguous Baroque building is the Regidor Ovalle House (18th century), where Miguel de Unamuno died in 1936. After this building, the Úrsulas convent (1516) has a sepulcher that has been considered as one of the most gorgeous treasures of the city.

Puentedey, the village that emerged on the ‘Bridge of God’
Las Merindades is a region full of interesting sights. One of its characteristics is the Más información