The Cathedral of León is a masterpiece of Gothic architecture in Spain and has been nicknamed “la pulchra leonina.” Aptly dedicated to the Virgin Mary, it communicates a sense of purity, while its extraordinary collection of stained glass livens it up.

Plan your visit to the Cathedral of León

There are some buildings that in themselves merit a visit, as they provide a sensory experience of historical value. We decided to branch off from our page dedicated to the city of León to create this specialized page in order to explain this exceptional building, which takes at least two hours to see. Generally speaking, it is always advisable to bring binoculars so as to appreciate the details of a cathedral, but in this case it is essential due to the marvelous designs on the cathedral’s stained glass windows and the great heights of its domes and towers. Finally, be sure to visit the excellent Cathedral Museum.

History of the Cathedral of León

Construction of the Cathedral of León began in 1243, when Nuño Álvarez was the bishop of the diocese. He chose to build it on a plot of land located next to the city wall and shared by a Roman temple, the palace of King Ordoño II, and the 2nd-century Roman public baths. Its style has been compared to that of the great pointed temples in northern France from the same period. The work was initially directed by Maestro Simón, then by Maestro Enrique—who also worked on the Cathedral of Burgos—until his death in 1277, and then by Maestro Pérez, who continued work until the end of the 13th century.

Construction was completed in 1301, although elements continued to be added in the centuries to come. The cloister was built in the early 14th century, the clock tower in the 15th century, and the tops of the towers in the 16th century. In the early 17th century, the bell tower (located to the left) was destroyed by lightning and was rebuilt according to plans by the great architect José de Churriguera. In the same century, the dome collapsed and serious problems with the foundation arose. Restorationworks were undertaken in 1859 and culminated in a new consecration of the cathedral in 1901. The renovation was carried out by the architect Juan de Madrazo, who eliminated the Baroque dome above the transept in accordance with the historicist criteria of the French architect Viollet-le-Duc. 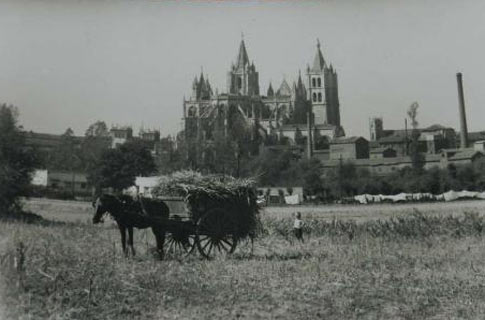 Old photograph with the cathedral in the background.

The stone used in the construction was brought from the town of Boñar in the mountains of León, but it is of mediocre quality, which has produced negative effects for the magnificent statues outside the cathedral.

Another of the most vulnerable aspects of the cathedral is the 134 windows and 3 rose windows (13th to 16th centuries) that make up its collection of stained glass windows. They underwent an important process of replacement in the late 19th century, promoted by the architect Juan Bautista Lázaro. The replacement process was relaunched in 1992 when citizens organized a movement in defense of the cathedral which was able to implement a stained glass restoration project.

What to see in the Cathedral of León

First, take a walk around the outside of the cathedral to view its façades. Begin with the main façade, framed by two asymmetrical towers. The one on the left is the bell tower, completed by Joaquín de Churriguera in the early 17th century. This western façade is composed of three sections divided by sharply-pointed arches. The Nuestra Señora de la Blanca façade opens up in the central part of the cathedral and is presided over by a statue of the Virgin Mary, a copy of the original which is preserved inside. This façade is dedicated to the Final Judgment, represented on its tympanum. The representation of Christ shows the wounds on his hands and side. Angels carry the Instruments of the Passion, and to the sides of the Virgin Mary and Saint John they intervene in favor of humanity in the judgment that is about to begin. On the lintel of the façade, the blessed and the condemned appear on each side of Saint Michael. Among the blessed there are some kings and mendicant friars along with an angel organist. As a type of warning, demons are shown throwing the sinners into two pots of boiling water while three monstrous heads devour the bodies of the condemned. It is a similar representation to that of the Puerta de las Tornerías in the Cathedral of Burgos. The other two parts of the western façade are called the Saint Francis façade (the one on the right) and the Saint John façade (the one on the left), both decorated with themes related to the Virgin Mary.

The northern façade, or Saint John façade (from between 1275 and 1280), features a tympanum depicting the nativity of Jesus: visitation, birth, adoration of the shepherds, Herod, epiphany, and the Massacre of the Innocents. On the archivolts there is an allusion to the Tree of Jesse, which has to do with the genealogy of Christ and the life of Saint John the Baptist. When you are done viewing the exterior, enter the cathedral and view the interior of the façade, at the top of which you can see the skin of the rumored “evil mole” which served as an excuse for the delays in finishing the renovations to the cathedral. According to the legend, each night the mole would destroy what the workers had built that day. The people of León finally caught and killed it, thanking the Virgin Mary for guiding them to this deceitful creature, and hung its skin on the interior of the western façade.

The southern façade, or Saint Francis façade (from between 1275 and 1280), also includes three sections and is dedicated in its entirety to the Virgin Mary. Its tympanum is divided in two: the lower part shows the death of Mary with the apostles preparing to bury her, and the upper part shows two angels crowning Mary. Christ is blessing Mary on a throne, and the pair is surrounded by angels.

The southern façade of the transept also has a triple façade composed of the Sarmental, Saint Froilán, and Death façades. The tympanum of the Sarmental façade is decorated with the apocalyptic vision of Saint John, with God flanked by tetramorph symbols. The four Evangelists appear on either side of God, poised to write their Gospels. TheSaint Froilán façade shows scenes from the saint’s life, his death, and the relocation of his relics to the Cathedral of León. The Death façade received its name due to the winged skeleton represented on one of its corbels. Not all of the designs planned for this façade were completed, but the shield of Prince Ferdinand de la Cerda was.

Finally, the Virgen del Dado façade on the northern façade of the transept is not visible from the outside; we will discuss it later on.

After walking around the exterior, you will enter the cathedral. Its floor has been compared to that of Reims Cathedral in France. It is a construction of great complexity: it consists of three naves until the transept, then five naves past the transept, and an apse surrounded by a spacious ambulatory with radial chapels.

The central nave is 30 meters high with arcades, an open triforium above the arcades, and the windows that crown the triforium. Its verticality is highlighted by the continuous columns that span three floors, creating the visual effect of souls ascending to God. Therefore, the cathedral’s great height expresses the idea of elevation and even lightness, achieved by the groups of thin pillars that support the domes and the magnificent stained glass windows that allow multicolored light to enter. One of the biggest attractions of the cathedral is its 134 stained glass windows—most of them designed between the 13thand 16th centuries—as well as three grandiose rose windows. Take a thorough look at the beautiful stained glass designs mainly depicting the Virgin Mary but also vices, virtues, effigies of saints and kings, and noble coats of arms.

Take note of the beauty of the choir. Its Gothic seats made of walnut were crafted by Flemish carpenters, who depicted apostles, saints, mythological characters, and some profane scenes as well. Unlike in other cathedrals, this choir is open, making it visible from the central nave. The retrochoir is a Renaissance work decorated with beautiful alabaster reliefs, alcoves, and statues. 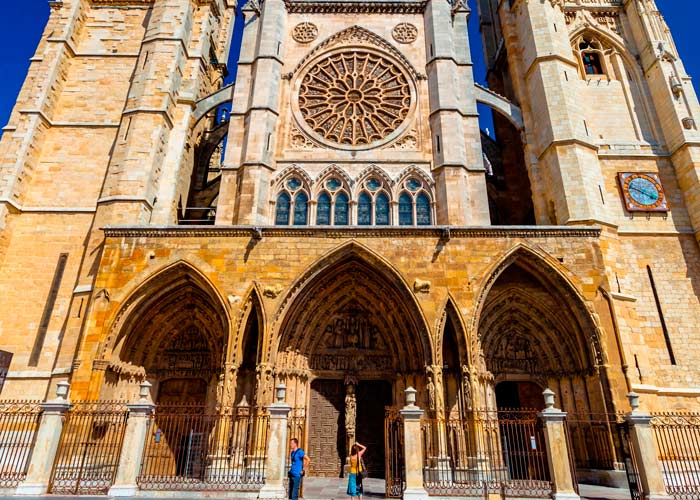 Entrance to the Cathedral of León.

The main chapel is surrounded by a plateresque fence. It conserves a 16th-century silver arch created by Enrique Arfe with the relics of Saint Froilán. The altarpiece features panels painted by the Flemish master Nicolás Francés in the 15th century. The five hexagonal chapels in the ambulatory conserve artistic tombs and polychrome wood carvings.

The apse chapel contains the tomb of King Ordoño II of León, consisting of a reclining statue from the late 18th century. To the left of the ambulatory there is the 15th-century Santiago/Virgen del Camino Chapel, formerly a library, which is adorned by Gothic sculptures and valuable stained glass windows. To the right you’ll find El Carmen Chapel, which collapsed in the mid-18th century and was later rebuilt by the architect Giacomo Pavía.

On the left arm of the transept, facing the Virgen del Dado façade, you’ll find the cloister built by Juan de Badajoz in the 16th century. From this point you can view the Virgen del Dado façade, created in the last decade of the 13th century, which is distinguished for preserving many of its original paintings. On its tympanum there is an effigy of Christ standing in an aureola surrounded by angels. On both sides of the façade there are statues of apostles and a scene of the Annunciation. The mullion shows the Virgin Mary with baby Jesus.

A plateresque staircase leads to the Cathedral Museum, where the most important treasures from this diocese are gathered. Some standouts are its collection of 12th– and 13th-century Roman carvings, paintings from the Castilian and Flemish schools, and sculptures like the magnificent Crucified by Juan de Juni. You can stop to look at thousand-year-old books, rarities like the Royal Diploma signed in 775 by King Silo of Asturias, the extraordinary 5th-century Mozarabic antiphonary (a book of psalms), codices with illustrations from the 10th and 11th centuries, and the so-called Libro de las Estampas (from the 13th century). Other magnificent pieces in the museum are the fabrics, silversmith works, and ivory on display.