History of the Cave of Valporquero 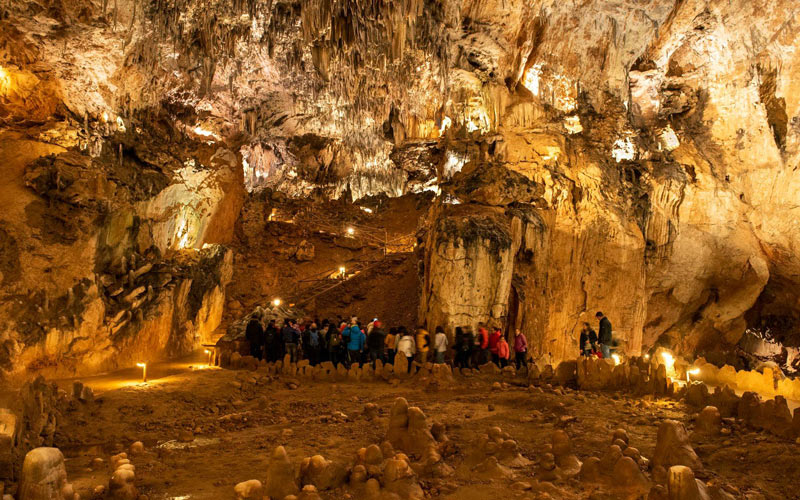 The origin of what you see in the Cave of Valporquero today is more than a million years old. At an altitude of 1,300 metres, during the Pleistocene, the cold waters of the Valporquero stream began to seep through the pores, fissures and cracks in the limestone rock. In doing so, they slowly and tenaciously dissolved its entrails. Finally they made their way into the heart of the Leonese mountain, forming an underground marvel. Unexpected dimensions and enormous volumes open up a path full of light and shadow. Thousands of limestone formations follow one after the other throughout the visitable chambers. The route extends for more than a kilometre.

The Cave of Valporquero has a chambers that was opened to the general public in 1966. Before that, the Diputación de León carried out an enormous task of refurbishment and illumination. Since then, always accompanied by knowledgeable guides, visitors are offered the opportunity to walk through this underworld. Visitors enter the depths of the mountain and enjoy the most diverse limestone formations. The landscape is made up of stalactites, stalagmites, lava flows and columns. All together they create a real underground cathedral. Inside the chambers the humidity reaches 99% as a result of the underground current and the average temperature is 7ºC.

A tour of its spectacular chambers 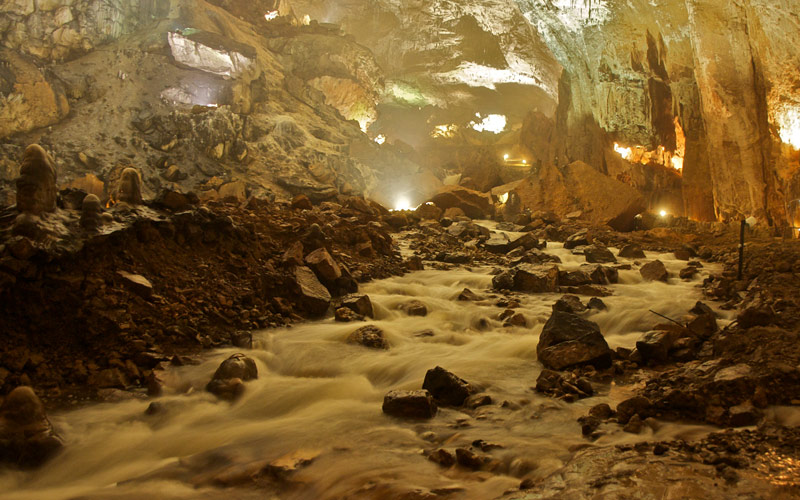 The visit to this natural space lasts about ninety minutes, during which you will visit seven chambers. In each one of them, water has modelled the limestone relief, creating a surprising architecture. The stalactites and stalagmites form fantastic columns and crests of various colours. Their whimsical shapes are reflected in the small lakes. The impact of what to see in the Cave of Valporquero increases in spring and autumn. The thaw and the rains fill the Valporquero stream, creating a deafening symphony with the flow of the water inside the cave.

Entrance to the Cave of Valporquero 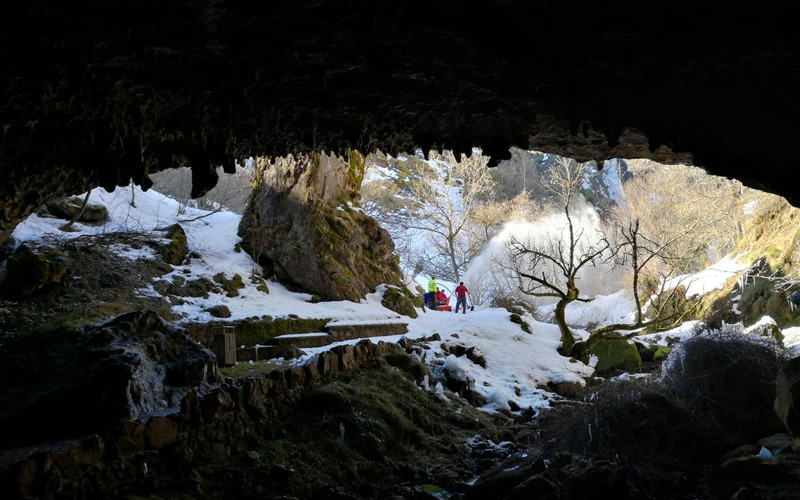 Entrance to the Cave | Photo: Courtesy of Cueva de Valporquero

The beginning of the route to the Cave of Valporquero already foreshadows the breathtaking scenery to be found inside this subterranean world. The entrance to the cave is located at an altitude of over 1,300 metres. This visit adapted for the general public takes place on the upper floor, as only experts and speleologists have access to the lower floor.

After passing through the short access tunnel that is excavated in the rock of the mountain, you arrive at the entrance to the cave, a foreshadowing of the cave’s large dimensions. The waters of the Valporquero stream flow through the mouth of the cave, accompanying the visitor for at least part of the visit. Below are all the chambers that can be enjoyed on this journey through the depths of the earth. 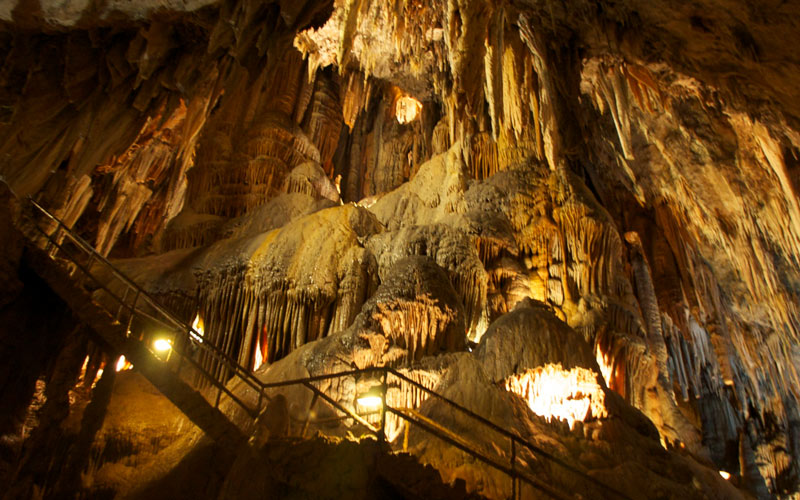 After passing the cave entrance, you reach the first of the chambers, the Pequeñas Maravillas (Little Wonders) chamber. It is preceded by a beautiful artificially illuminated lake. Here you can see formations that have been given special names. They are the “Small Wonders”, speleothems for geologists, such as “El Órgano”, “La Torre de Pisa”, “Las Gemelas” or the “Virgen con el Niño”. Located to the north of the Gran Rotonda, these structures take their name from the figures they resemble, although you have to let your imagination run wild. 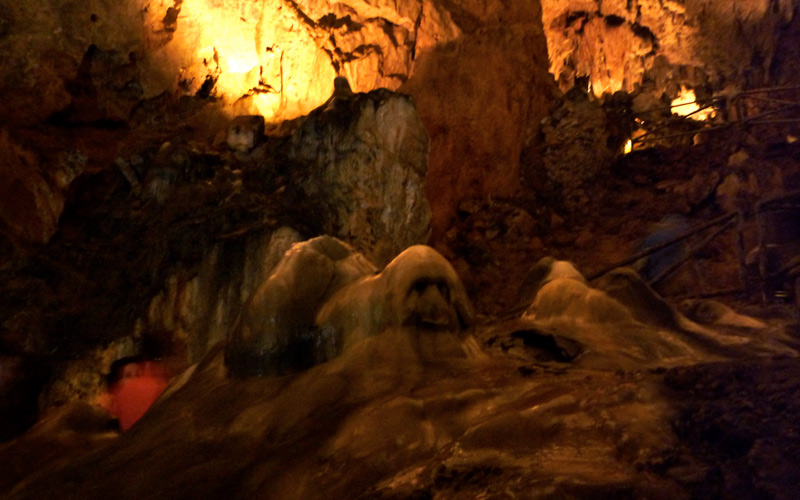 The Gran Rotonda is the largest chamber, with more than 100,000 cubic metres of underground space. Its 5,600 square metres of surface area and almost unreachable 20 metres in height are striking. As you reach the centre of the chamber, the whitish ceilings emerge higher and higher.

The walls, on the other hand, spread out to form a natural vault more than twenty metres high. This is crossed by the Valporquero stream. The Gran Cascada (Great Waterfall), as white as snow, and the Fantasma (Ghost) are the most characteristic figures in this chamber. As a curiosity, during the rainy season it is crossed by a river whose sound reaches the Sala de las Hadas (Fairies’ chamber). 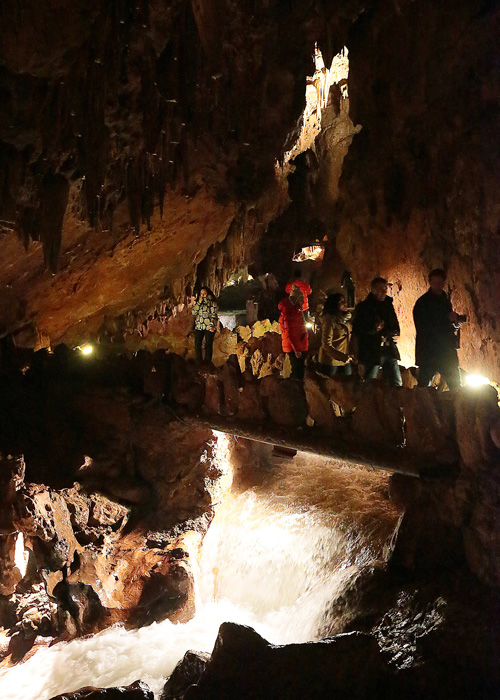 Continuing with what to see in the Cave of Valporquero, the Hadas chamber is reached thanks to a path that runs parallel to the river until it reaches a small viewpoint. In the rainy season, it boasts a beautiful 15-metre high waterfall that disappears through the Curso de Aguas, a lower floor of the cave that is reserved only for speleologists. 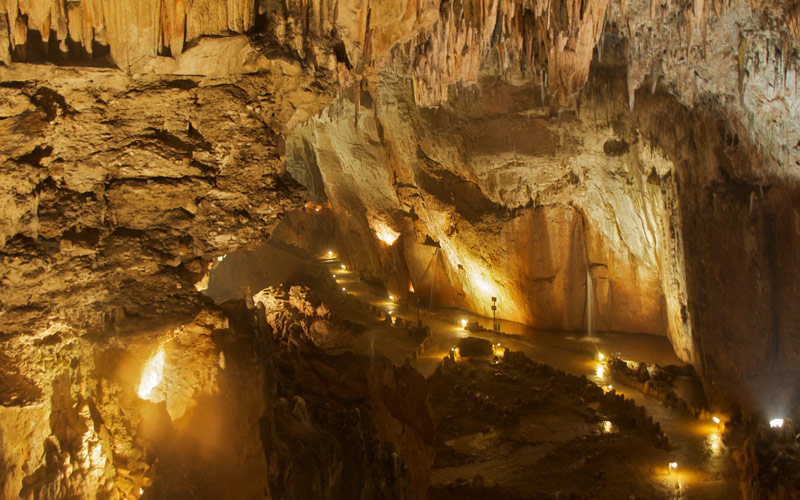 Then it is time to enjoy the fourth chamber called the Cementerio Estalactítico (Stalactitic Cemetery). The state of this chamber is due to a series of sediments and landslides that led to its partial clogging. Its ceiling is filled with stalactitic plumes following the ancient course of the river. The path winds its way through a floor full of fallen stalactites. On the other side, the stalagmites on the floor protrude without any pattern, forming an eerie stalactitic graveyard. The final part of this chamber is narrow, so that it serves as a protection for the adjoining chamber called “Gran Vía“. 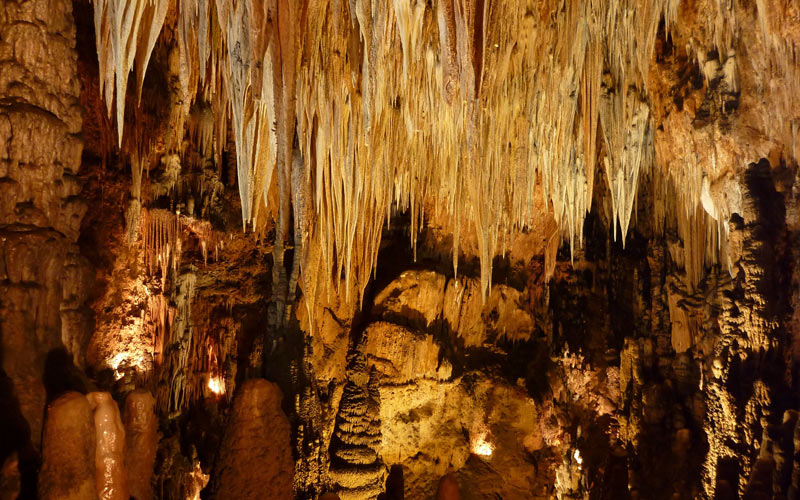 After this comes the Gran Vía room, which, despite what its name suggests, is only eight metres wide, although it is 40 metres high. This spectacular gallery contains vertical limestone strata and stalactites several metres high. This forms a narrow corridor more than 200 metres long. At the end of this chamber, the ground sinks and there is an access to the so-called “Curso de Aguas”. However, the passage is reserved for speleologists who dare to walk through galleries and waterfalls, as it is not suitable for the general public.

In the centre of the room known as the Columna Solitaria is a slender and unique column that is surprisingly large in size. This column rises up to the ceiling where it is lost among hundreds of stalactitic spires. 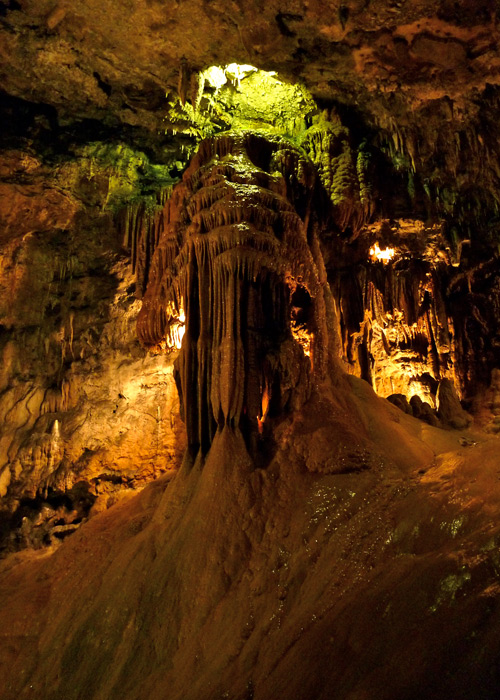 The area known as the Maravillas is the most complete of all, with the greatest number of varied geological formations. A space in which thousands of pointed stalactites coexist in a spectacular range of colours. Countless speleothems with a myriad of shapes scattered throughout the cavity. This space is presided over by the Lake of Wonders, a small underground lake. This is the end of the visit to the cave of Valporquero, where the beauty of the shapes created by nature is, above all, astonishing.

A children’s play area has been set up around the cave. There is also a restaurant and pleasant picnic areas with shady spots scattered along the mountain slopes. On the way back to the village, it is a good idea to take a detour to the viewpoint. From here there is a magnificent view of the mountains of León and the Torío valley.

How to visit the cave 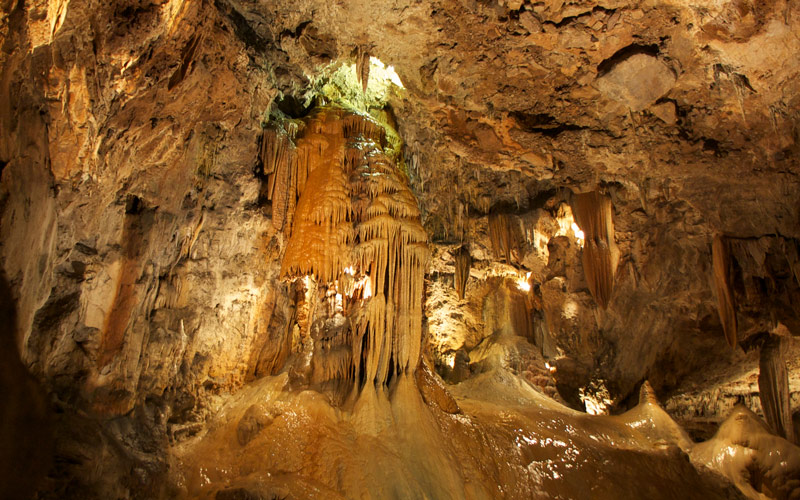 There are several ways to visit the cave of Valporquero. One of them is the “normal tour“, where the visit takes place in the first five chambers and lasts approximately one hour. Another is to do the “long tour“, in which you visit the seven chambers for up to an hour and a half. The last way is the “Unusual Valporquero” tour, reserved for small groups. This guided tour includes: the upper part of the Pequeñas Maravillas chamber, the lower part of the Maravillas chamber, the access gallery to the Curso de Aguas, the lake and the end of the cave. This visit lasts up to two and a half hours.

It is well worth exploring the narrow streets of Valporquero de Torío, its stone, tile and wood houses. From the town there are hiking routes such as the one that leads to the Valporquero beech forest. This one climbs up to the pastures above the Vegacervera gorges. The gorges of the river Torío as it passes through Felmín and Vegacervera are the main attraction of the area. It also has a bridge of Roman origin and a cobbled walkway along the river.

Coladilla, 2 km away, has an interesting 12th century Romanesque church. The nearby Matallana de Torío has the Sanctuary of Manzaneda. This was built in the 18th century on the site of the medieval monastery. This concludes our tour of what to see in the Cave of Valporquero.

Castile and León, Caves, forests, hiking, León, natural environment
It may interest you...