To the north of León, there is a forest known as Faedo de Ciñera, located next to the Hoces del Villar gorge. A natural spot where the hundred-year-old beech trees, the water, the rocks and their legends and stories make it a magical place. This is one of the most popular active tourism activities in León to do with children in the area thanks to the simplicity of the route and how well equipped it is. In addition, the forest is a Biosphere Reserve, declared in 2007 as the best cared-for forest in Spain.

How to get to the Faedo de Ciñera 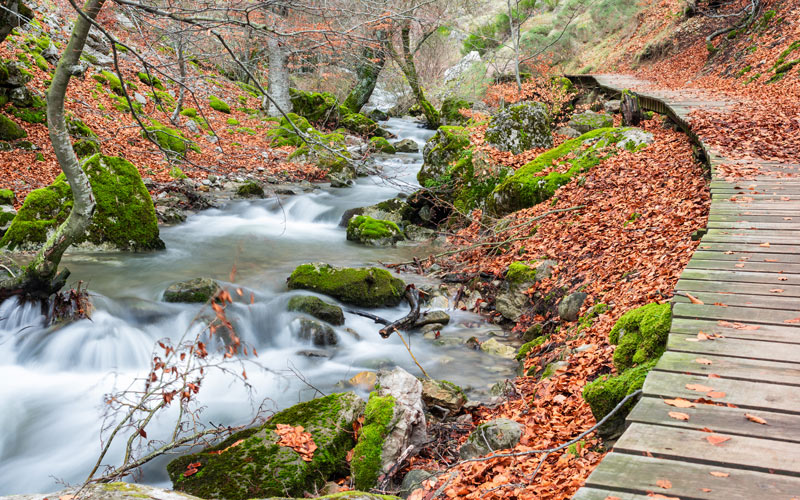 The first thing is to know how to get to Faedo de Ciñera, in the upper course of the Bernesga River; located on the southern slopes of the Cantabrian Mountains. It is one of the many places of interest that can be found in the province of León. In order to enjoy this pleasant hiking route, it is necessary to reach the mining town of Ciñera de Gordón, located 40 minutes by car from León, by driving along the N-630 road. It is an ideal autumn getaway due to its short distance from the capital to enjoy the natural surroundings of the area. 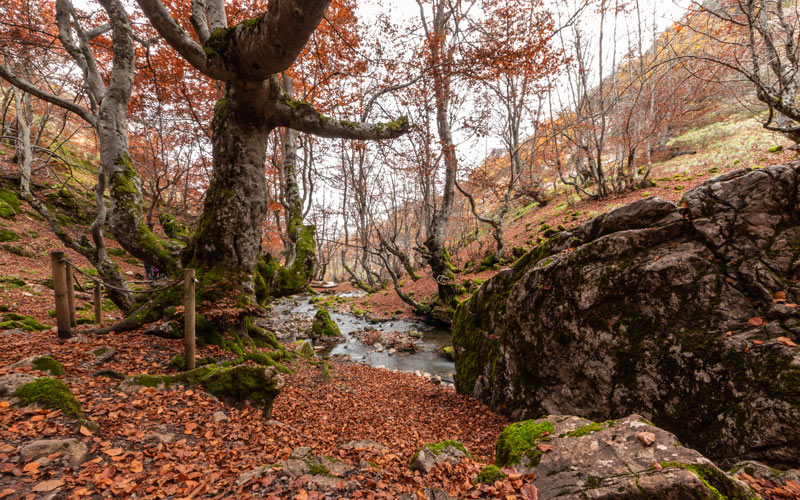 Route of the Faedo of Ciñera, a place full of magic

The Faedo de Ciñera route has a maximum length of 11 kilometres; depending on the stages that visitors want to do. It is a centuries-old beech forest; where you can find one of the oldest trees in Spain, more than 500 years old. 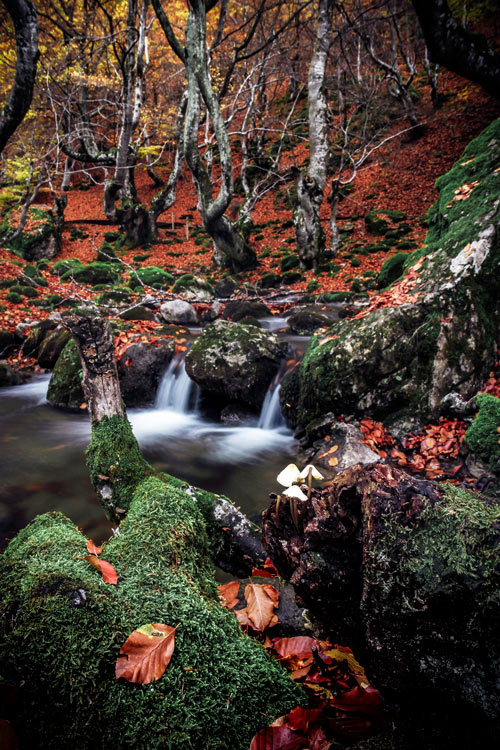 The best season to visit the area is in autumn. The landscape with the deciduous leaves of the trees turns into ochre and red tones; although any season is good to visit this place. It is ideal to go with the family, the route is accessible; so the youngest can enjoy it to the full. One of the peculiarities of the route is that by having different stages you can choose whether to do the whole route or just part of it; depending on the needs and characteristics of each one.

In fact, the route to see the faedo is only two kilometres long; almost completely flat and very well signposted. Furthermore, the route is known as an enchanted forest because of the legends of witches and fairies that are told about it.

This is the first stage, a path without difficulty and suitable for everyone; with no unevenness and almost flat through the hundred-year-old beech forest. The route is two kilometres long; and if you decide to do this part alone, it is four kilometres round trip.

During the route it is possible to find an altar to the patron saint of the town, the Virgin of Santa Bárbara; located at the entrance to a pithead and surrounded by old freight cars. It is also possible to see some pictures of miners and materials used for mining; something very typical in the area for years. The best known of the area is the Fabero del Bierzo mine; a short distance from the route. 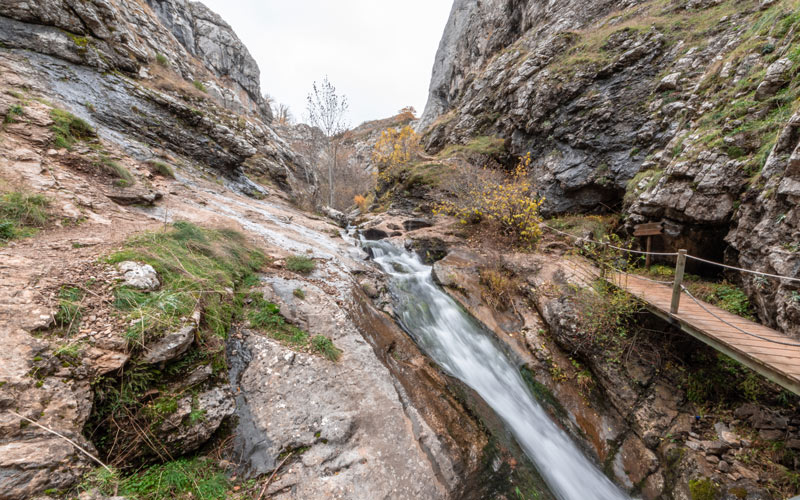 Then, you have to cross an old stone bridge to cross the Arroyo Villar, from here, the wooden footbridges begin. In this area you can admire the canyon, full of beech and oak trees. When you reach a recreational area with picnic areas, you can admire information panels with the fauna and flora of the area. After this, you have to cross a last bridge to reach the Faedo de Ciñera, declared as the best cared forest in Spain, by the NGO Bosques sin Fronteras and the Ministry of Environment.

The forest is small but charming, it has panels with information about the Faedo de Ciñera and about the legends of fairies and witches of the place. Of course, a visit to Fagus is a must, a  centuries-old beech tree that is over 500 years old and has been declared a monumental tree. At the end of the forest, next to a fountain, there is another bridge to reach the second stage of the route, the Hoces de Villar. For people who want to do only this part of the route it is time to retrace their steps.

The second stage begins, perfect for discovering the gorge. It is a little more complicated than the previous one, you have to climb stone stairs but it is safe, even with the smallest ones as they have fitted a chain on the wall to avoid any mishaps. 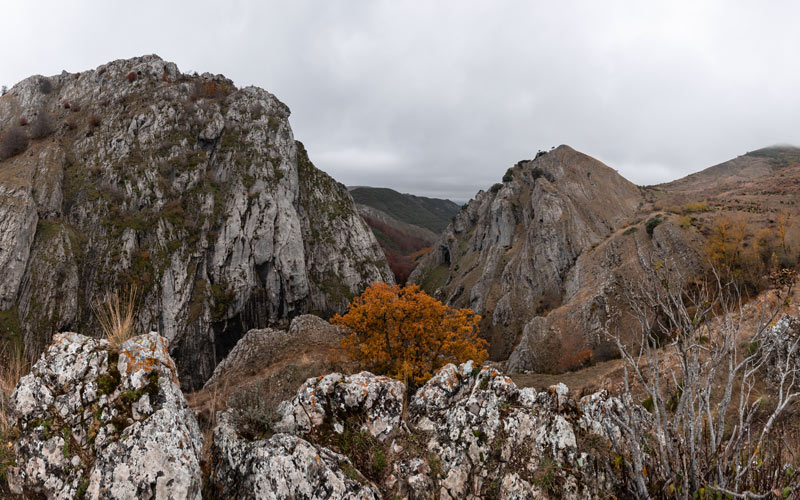 After crossing this area, you will reach an iron footbridge that goes into the canyon; ideal to contemplate the erosion of the water of the Villar stream over the years. Despite its small size, the beauty is spectacular.  You can take a detour to the left to approach the bank of the stream and enjoy its waterfalls and pools, known as Las Marmitas de Gigante. A perfect natural setting to cool down in Castile and Leon and take a break on the way. Then it is time to follow the route to the next stage or retrace your steps.

The third stage crosses the Ciñera de Gordón; with it the route is circular and ends at the same point where the first stage begins. It is the most difficult and the most complicated section, although the views of the canyon are impressive. Most walkers finish the route in the second stage; although it is possible to continue to the village of Villar del Puerto and La Vid de Gordón, with a total of three stages of 11 kilometres.

The legend of the Faedo de Ciñera 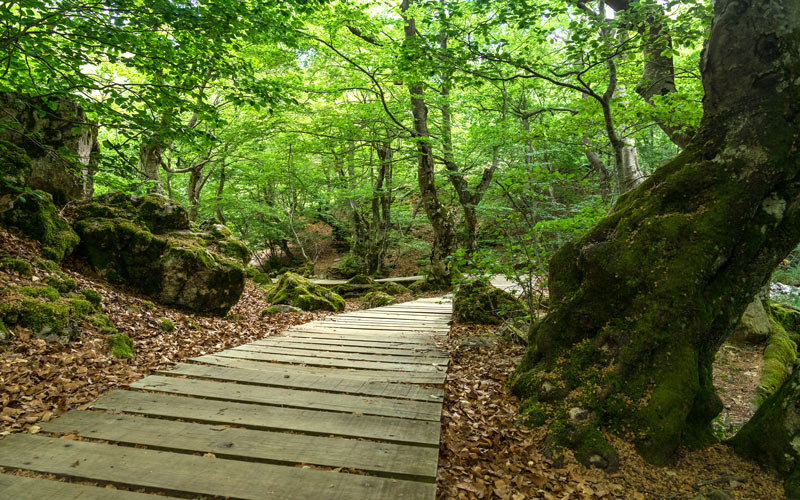 According to legend, a witch called Haeda lived in Faedo. She had powers granted by the devil to do evil; and if she used them to do good she would disappear. For years she did so. But between La Vid and Santa Lucía, there lived a family with nine children who had a hard time in winter because they had nowhere to take refuge; having to sleep in a cave. But one day it snowed so much that they could not get to the cave. The witch Haeda saw them and could not resist. She pulled stones from the mountain and set them on fire so that the family could survive; repeating this the next day.

As she looked tired, Haeda did this with several stones from the mountain, which caused many families to come to shelter from the cold; founding a village on the ashes, called Ciñera. The witch went to die in Faedo. Today it is possible to find a representative figure of Haeda in the oldest beech tree in the forest. A perfect plan to get to know the surroundings of the most beautiful villages in Castile and Leon, such as the Faedo de Ciñera, one of the most fascinating tourist attractions in the area.

autum, Castile and León, forests, hiking, León, natural environment
It may interest you...