The fertility of its vineyards and cherry gardens are associated with the memory of the two ill-fated princesses who mark the region’s medieval history: Urraca of Castile and the Norse princess Kristina (who has a surprising story).

Plan your visit to Covarrubias

The things to see in Covarrubias are outdoors, so the visit lasts for as long as you want to walk. One way to get there is by way of road BU-901 to go around the curious Garganta de la Yecla with its sabine trees; here, you can visit the spiritual Santo Domingo de Silos. For another half-day excursion, follow CL-110 to visit the ruins of the Arlanza Monastery, then continue to road N-234 which in the eastern direction leads to the legendary town of Salas de los Infantes (visit its dinosaur museum). If you have one or two days to spend, you can head to the north to participate in active tourism and hiking in the magnificent but little-frequented Natural Park of the Neila Glacial Lagoons. In the direction of Burgos and Madrid, the best option for a visit is Lerma.

The area used to be inhabited by the Iberian tribe of the Turmodigi. There is no information about the region during the Roman age, but in the mid-7th century King Chindasuinth founded and fortified a primitive town there. In 737 it was conquered by the Muslims.

Covarrubias owes its name to the geological characteristic of clay cavities (“Cuevas Rubias”). In the times of the Visigoths, it was home to a monastery later converted into an abbey.

In the early 10th century, the Tower of Fernán González was built to protect the defensive wall of Covarrubias. It may have been given this name because Muniadona, the mother of Fernán González, had a mansion there where her son would often visit her; he is buried in the town alongside his wife, Sancha. His son and successor, Count García Fernández, bought Covarrubias from the monks of Valeránica Monastery and made it an infantado (appanage) for his daughter Urraca. She was named abbess with full civil and religious jurisdiction over an ample territory comprising 70 churches and 20 monasteries. However, the initiative did not work out, as the princess fell in love with a pastor, generating a public scandal. According to a local legend, she was locked up in the tower as punishment. Covarrubias came to be part of the diocese of Toledo, until King Ferdinand III reclaimed royal custody in the 13th century.

In 1248, King Ferdinand III decided that his son Prince Felipe would be the abbot and lord of Covarrubias. Ten years later, his son and successor Alfonso X the Wise signed a matrimonial alliance with the Viking king Haakon to the effect that the Viking princess Kristina of Norway would go to Castile to marry a member of its Royal House. After four years of marriage to Felipe (the former abbot, who had been secularized for this purpose), the princess’ body was brought to the collegiate church of Covarrubias, where her tomb can be seen today.

In the final third of the 16th century, an epidemic broke out in the town. The doctor of King Felipe II—nicknamed “the divine Vallés”—was a Covarrubias native and came to the aid of his townsmen. He recommended that parts of the wall be destroyed to allow the air to circulate and that cramped and unsanitary houses be ventilated. The destruction was carried out, although sections of the wall remain. In that period, a good deal of the Crown’s documents were moved from Burgos to Simancas, but it was decided that the documents of the adelantamiento of Castile would be preserved in a building in Covarrubias adapted for this purpose. 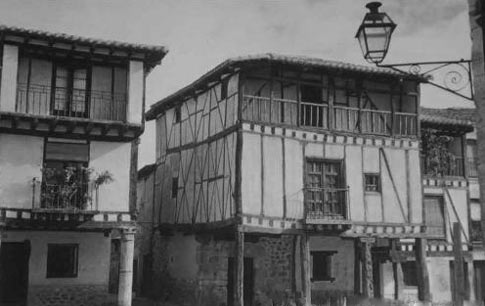 Covarrubias in the early 20th century

In 1805, having been recently discharged from the army at 35 years old, Jerónimo Merino Cob arrived in Covarrubias, where he studied theology at the orders of his uncle, who was a priest in the town. Within a year and a half, he passed the exam and became “el cura Merino” (“Priest Merino”). After May 2, 1808 he became a guerrilla and came to be a lieutenant general in the army.

In 1978, Covarrubias dedicated a monument to the Viking princess, and more recently a program of festivities in October. In 2004, it became sister cities with the Norwegian town of Tonsberg, where she spent part of her childhood. In 2011, three kilometers from the town a chapel was built in honor of Saint Olaf, a Norwegian king of Viking origin who converted to Christianity.

What to see in Covarrubias

The monument is accessed by a plateresque arch, which belonged to the archive of the adelantamientoof Castile and was built in 1575 at the request of Felipe II.

In the Plaza of doña Urraca, the town hall occupies what was formerly the Fernán González Mansion. In the adjoining Plaza of doña Sancha, which has a triangular shape, and on the surrounding side streets you can admire houses with wooden lattices of juniper above wooden pillars with balconies: the old pharmacist’s house, the mansion of Bishop Pedro Peña (whose façade features unique wooden corbels), and the house of doña Sancha, which stands in the plaza named after her. From there you can see the remains of the medieval wall and the 10th-century Tower of Fernán González.

A must-see in Covarrubias is the great Collegiate Church of San Cosme and San Damián, a late Gothic building finished at the beginning of the 16th century. Its cloister conserves the tomb of Princess Kristina of Norway, the unfortunate wife of Prince Felipe who died in 1262. The spacious interior of the church consists of three naves. Facing the main altar, there are the stone tombs of Fernán González and doña Sancha, the latter in the late Romanesque style. Other burial sites of princesses, abbesses, nobles, and clergymen are spread out throughout the church. In the central nave, the Renaissance pulpit, choir, and 17th-century organ stand out.

The museum contains many liturgical objects and a collection of sculptures and paintings by Castilians such as Pedro Berruguete and Diego de la Cruz, as well as by Flemish artists from Van Eyck’s circle. The triptych of the Magi painted in the 15th century by the Maestro of Covarrubias is the church’s masterwork. The authorship of a 15th-century high relief has been attributed to Gil de Siloé.

In 1978, a statue was erected outside the church in homage to the Norwegian princess. The Princess Kristina of Norway Foundation, a product of the close relationship between Spain and Norway, promoted the construction of the avant-garde Chapel of Saint Olaf with its high tower, nearby Covarrubias in the direction of San Pedro de Arlanza. 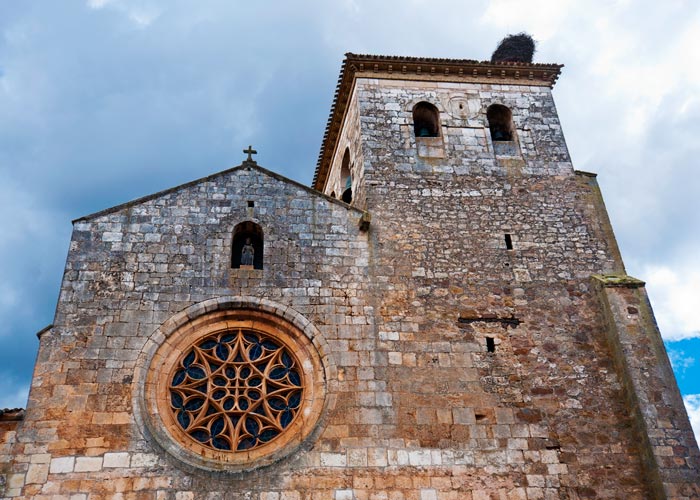 Façade of the Collegiate Church of San Cosme and San Damián

The Gothic Church of San Tomás is another notable church in the town.

Several natural routes can be proposed from Covarrubias on BU-904 passing through the town of Puentedura by the detour to the left to the town of Ura, where a trail runs parallel to the Mataviejas River canyon towards Castroceniza, allowing for a stroll between oak trees.

Some seven kilometers towards Hortigüela you’ll find the ruins of the Monastery of San Pedro of Arlanza, founded in 912 by Gonzalo Fernández, the father of Count Fernán González. You can even see the abbey and tower of the 13th-century Romanesque church, which were expanded in the first third of the 16th century in the Gothic style. The cloister and the rest of the rooms are from the 17th century. The portal of the church was moved to the National Archaeological Museum in 1895, and two of its tombs were brought to the Burgos Cathedral. Some of its frescoes ended up in the Metropolitan Museum in New York and others in the National Art Museum of Catalonia..