The city of the rock and the river

On a hill overlooking several rivers there is an important castle and beautiful examples of popular architecture in adobe and wood, as well as several medieval and Renaissance monuments. In this town the traveler can buy in the oldest pharmacy in Spain, which is still open since the eighteenth century.

The tour of the castle and discovering what to see in Peñaranda de Duero can take half a day. The tour can be completed by following the Bu-925 to see the important Roman city of Clunia, located near the town of Peñalba de Santiago. Wine lovers can look for wineries in the DO Ribera del Duero area that can be visited. Those who have an additional day should visit the city of Aranda de Duero, a destination with a lot to see. The local gastronomy and where to reserve it we collect in the pages to sleep and eat in Peñaranda de Duero.

The name of Peñaranda refers to the fortified rock on the tributary rivers of the Duero, which provide plenty of water. It was an enclave of the Celtiberian tribe of the Arévacos, dependent on the nearby city of Clunia (now Coruña del Conde) which was an important center of resistance against the Romans. At the beginning of the tenth century, when the Christians pushed the Moors to the Douro River, they occupied the town, without having any chronicles about the event in Peñaranda; According to tradition, its original strength was built by the same Count Fernán González.

In the early fourteenth century King Ferdinand IV gave the town to the knight Fernán Ruiz de Amaya, who in 1311 sold it to the Infante Don Pedro, son of Sancho IV of Castile. In the time of Alfonso XI the town became a manor of the Avellaneda family, Counts of Miranda del Castañar, which promoted the main architectural works of the town, including the reform of the castle in the fifteenth century. The Avellaneda related later with the Zúñiga; During the sixteenth and seventeenth centuries several members of this family held important positions in the Spanish Empire, developing an important court in the town, which was accustomed to receive important visitors. In 1608 the king Felipe III the dukedom for the IV count of Miranda del Castañar, Juan de Zúñiga and Avellaneda, viceroy of Catalonia and Naples. Later the lordship of the town went to the Portocarrero family, to finally join the duchy of Alba.

During the War of Independence it was an area in which the Burgos guerrilla leader known as the father Merino was very active. On April 16, 1812, he ambushed in Hontoria de Valdearados, in the vicinity of Peñaranda, a battalion of 669 Polish spearmen in the service of France, who were massacred there. This event is commemorated every year by the Cultural Association La Francesada.

Until the provincial reform of 1833 Peñaranda belonged to the province of Segovia, then joined the Burgos.

What to see in Peñaranda de Duero

We recommend visiting Peñaranda de Duero starting with the arch of the old wall, through which you can access the Main Square. This is a cobbled space in which a 16th-century Jurisdictional Rollo is erected, an Asset of Cultural Interest, in which the Counts of Miranda del Castañar made their announcements; It was originally outside the walls and was moved there for decorative reasons in 1959.

The houses of the village, among which the one of La Ribera, are built with adobe and wooden framework, of little depth and two floors to which an attic is added. The ground floor was destined to press and the superior one housed the kitchen and the bedrooms. It also had a basement to access the underground wineries that are distributed throughout the urban space. The façade was occupied by wooden balconies like solanas.

Around the Plaza Mayor, in addition to the houses on the arcades, there is the elegant Ducal Palace and the monumental Church. This place has been chosen as a location in films like Los alegos pícaros (1988), starring the great Italian actor Vittorio Gassman.

The Palace of the Zúñiga and Avellaneda is an important Renaissance building of the sixteenth century, which is accessed by a beautiful plateresque doorway decorated with marble marbles. After the hall a beautiful patio with two floors with arches, with a well decorated. The ceilings of the rooms have a great variety of Mudejar, Gothic and Renaissance coffered motifs; the so-called Hall of Ambassadors stands out of the rest of the rooms.

In a back street of the palace you can see the Ximeno Botica of Peñaranda de Duero which was ran during generations by the same family since its creation in the late seventeenth century. In its dependencies it treasures the Pharmacy Museum with a valuable collection of Talavera de la Reina ceramics.

The Church of Santa Ana is an old collegiate church built in the mid-sixteenth century and renovated with a baroque portal of the eighteenth century. The main altarpiece, of neoclassical style, counted with the intervention of the famous architect Ventura Rodríguez. In the presbytery a reliquary keeps the heart of Don Cipriano de Portocarrero, Count of Montijo and father of the famous Eugenia, Empress of France.

In the center of the town the Convent of the Conceptionist Franciscan Mothers, founded in 1558 by the Counts of Miranda, which has a beautiful Renaissance patio in the interior and a church covered by an elegant Mudejar coffered ceiling.

In the outskirts is the Convent of Carmen that includes a church of classicist style, with altarpieces inside the seventeenth century.

The visit of Peñaranda can not be complete without a climb to the Castle. It is arrived taking the exit of the town by the deviation towards Caleruega from which it appears the indication to the left of the way that takes to this strength, whose current aspect is due to the reform of century XV. Its battlements are quite deteriorated, but it keeps in good condition its important keep, which has been restored and is the headquarters of the Interpretation Center of the Border Castles. 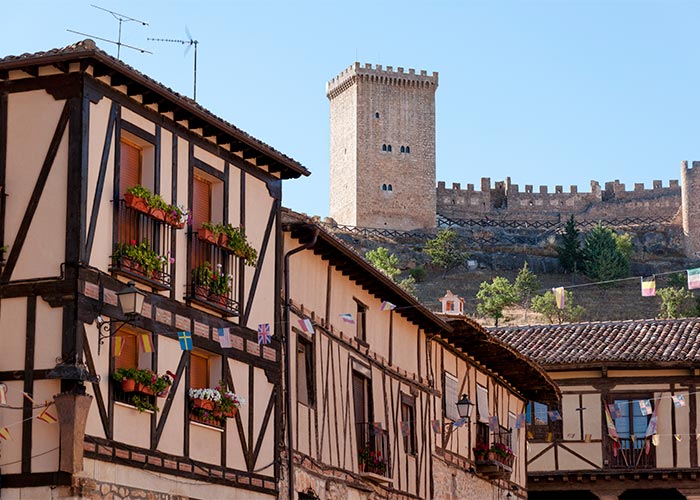 Typical architecture of the houses with the Castle in the background.

7 kilometers to the south is the Monastery of the Vine, originally of century XII and that continues being occupied by the Augustinian monks. It has a spectacular western facade of baroque style, crowned by a three-story belfry. The church has three naves with a large dome over the transept, mixing in its interior the Gothic and the Renaissance style. From the primitive Romanesque church there are the columns crowned by excellent capitals, as well as their baptismal font. Do not miss the 16th century cloister, from which the view of the dome of the church is especially attractive.

About 10 kilometers away, at the end of Peñalba de Castro, is the archaeological site of Clunia Sulpicia, a Roman colony that reached 30,000 inhabitants. It is said that in it was proclaimed emperor of Rome Galba, in the year 69 a. of C. Its splendid theater excavated in rock had room for 9,000 spectators. Also noteworthy are the thermal buildings of Los Arcos, the forum, the tabernae and houses with mosaics such as the Mosaic of the pigeons of the Triangular House.