At the foot of the Obarenes Mountains on the bank of the Oca River lies San Íñigo’s monastic town of Oña, which was a royal mausoleum and whose extensive possessions encompassed 300 towns and 200 churches. Eventually expanding as far as the city of Huesca, Saragossa and the entire Cantabrian shore were the cause of disputes between monks which had to be mediated by the pope himself.

Plan your visit to Oña

The most important thing to see in Oña is the Monastery of San Salvador. The other main attraction in the comarca of La Bureba is the Natural Park of the Obarenes-San Zadornil Mountains, where you can partake in active tourism activities. You can do many excursions to places near Oña; the nearest one is the medieval town of Poza de la Sal. To the north, past Trespaderne, you’ll reach the rock fortress of Frías. Towards the south, going by way of the CL-632, you’ll arrive in no time at the town of Briviesca, an emerging tourist destination with a great gastronomical tradition.

In the Paleolithic Age, some 15,000 years ago, the caves surrounding Oña were already being inhabited. Of special note are the caves known as Blanca, Caballón, and Penches, which is known for its carvings depicting five goats.

The Autrigones tribe later settled the area. Oña’s name would be derived from the term onna which in their language meant “ash,” an abundant tree in the area.

The Muslim historian Ibn Hayyan stated that in 934 the troops of Abd-ar-Rahman III laid waste to “the fortress of Oña, its plains, and its monastery.” However, neither Roman nor Arab remains have been found.

A manuscript from 967 mentions the town and its alfoz, which implies the existence of a castle or fortress. In 1011, Count Sancho García, the son of the treacherous countess, founded the Monastery of Oña due to his desire to build a family mausoleum. King Sancho III the Great implemented Cluniac Reform in the monastery and put the abbot, who would later be canonized as San Íñigo, in charge. All of this encouraged numerous generous donations, greatly enriching the wealthy community which would achieve independence from the king’s power. This fact piqued the interest of the Fernández de Velasco, a powerful family from several surrounding towns who would obtain the duchy of Frías and the hereditary title of constables of Castile. In the second half of the 15th century, together with the Benedictine Congregation of Valladolid they took the monastery by force and submitted it to their control. However, the dispute was taken to Rome where a ruling was issued in favor of the Oña Benedictines, recognizing that they only owed spiritual obedience to the pope and could continue to govern themselves. In this monastery in the mid-16th century, the Benedictine monk Pedro Ponce de León developed sign language, the language used today by the deaf community around the world.

What to see in Oña

The only remaining entrance point in the old defensive wall is the Arco de la Estrella (“Arch of the Star”). Several houses are preserved that display the coats of arms of those who lived there. On one side of the town hall plaza there’s the Church of San Juan, which contains important remains from the Romanesque period as well as a 13th-century Gothic calvary, a Gothic portal, and an austere tower with an overlook. In the tower you’ll find the Resin Museum, where you can learn about the local resin industry, which by now has disappeared. The top floor of the tower is complete with an overlook of the town.

The Monastery of San Salvador originated as an abbey founded by Count Sancho García in 1011 as a retreat for his daughter Trigidia. The abbey was initially conceived as a co-ed convent with two communities of different sexes who shared the facilities but reported to separate male and female authorities. In 1033, King Sancho III the Great of Navarre handed the abbey over to the Clunic monks. It was put under the direction of a chaste abbot who would be canonized as San Íñigo, who made the abbey a center of culture and spirituality. San Salvador enjoyed some privileges which were expanded when it was converted into a royal mausoleum. In reality there are two mausoleums: the royal mausoleum housing the bodies of the monarchs of the kingdoms of Castile and Pamplona, and the counts’ mausoleum where the counts of Castile are buried. It contains eight coffins and nine people from the 11th and 13th centuries. The coffins are unique pieces due to the material from which they are made, walnut and boxwood. The resting place of Bishop D. Pedro López de Mendoza was moved to the sacristy of one of the church’s naves.

The great entrance terrace leading to the most modern part of the building is behind the 18th-century Baroque façade. To get to the church of the abbey, you have to go around the building and ascend a long staircase. The portico, built in the last quarter of the 11th century in the Romanesque style, is decorated with statues of kings. An engraved Gothic-Mudejar door leads into to the church. The 13th-century Gothic church preserves Romanesque remains from different periods. The front of the church, built in the late Gothic, is covered by a spectacular star-shaped dome with eight points. It consists of a single nave with three sections and several chapels. The wall to the right-hand side conserves various scenes from the poem La Vida de Santa María Egipciaca, in the linear Gothic style, and El Cristo de Santa Trigidia, in the French Romanesque style. There are also remains of the main altarpiece carved in walnut wood with boxwood insets, a 15th-century Gothic-Mudejar work by Brother Pedro de Valladolid, and scenes from the Passion of Christ, painted by Brother Alonso de Zamora (15th century), as well as a Baroque organ from 1786 consisting of over 1,100 tubes. 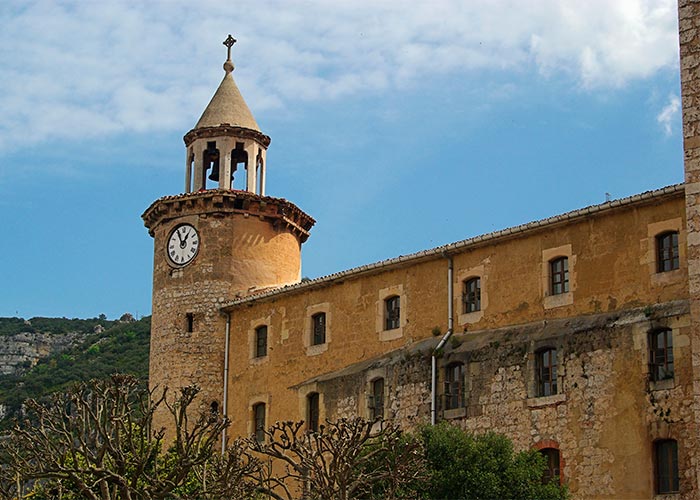 In the late 15th century, the church was expanded to include a mausoleum beneath the star-shaped dome. It contains a Baroque altarpiece, a choir with Gothic chairs from 1483, and the tombs of two kings of Navarre, Sancho the Great and Sancho the Strong, as well as the tombs of Castilian counts such as don García and don Sancho. The tombs are carved in the Gothic-Mudejar style in walnut wood with boxwood insets and were crafted by Brother Pedro de Valladolid in the 15th century. The burial sites are surrounded by paintings by Brother Alonso de Zamora representing scenes from the Passion. In the mid-18th century, the Chapel of San Íñigo was added, presided over by a Baroque altarpiece which contains the urn with the saint’s ashes. A door to the right leads to the sacristy, which has been converted into a small museum of Baroque furniture, objects of worship, and valuable fabrics.

In the chapterhouse there are windows, currently blocked off, of the Romanesque building which connected this room to the cloister. They are beautiful semicircle arches decorated with diamond tips and capitals shaped like animals. You can even make out a good deal of the original polychrome. Polychromatic arches in the Romanesque style, surely coming from the refectory, are also preserved. The main cloister of the Monastery of San Salvador, also Gothic, is an early-16th-century work by Juan de Colonia. Four galleries with ribbed vaults form a trapezoidal floor. It houses numerous burial sites of counts and Castilian paladins. In 2012, the seventeenth exposition of Las Edades del Hombre took place in the Monastery of San Salvador.

Tours of the monastery are directed by an audio guide, except for previously organized groups who can arrange for a guided tour. The visit to the tower and the Medieval Visitors Center can be arranged at the City Office of Tourism (tel. 947 30 00 78).

The Visitors Center of the Monastery is located on Calle Barrusco in the Jewish quarters.

In the old cowshed of the monastery, you’ll find the Information Office where you can get information about the Natural Park of the Obarenes-San Zadornil Mountains.

Ojo Guareña cave, more than 100 kilometers of long caves and galleries
[vc_row][vc_column][vc_column_text]North of the Province of Burgos is located Ojo Guareña,  one of the most important Más información

Romanesque Route through Palencia
[vc_row][vc_column][vc_column_text]When we talk about the artistic splendor in the 10th and 13th centuries, we are referring Más información

Free Tour Through Burgos, the City of El Cid
[vc_row][vc_column][vc_column_text]Burgos, is the medieval city of El Cid, history, residence of nobles, and the court Más información