Las Merindades is a region full of interesting sights. One of its characteristics is the mixture of natural and cultural elements. For example, Ojo Guareña combines a series of spectacular caves with a hermitage full of frescoes. In this respect, Puentedey stands out, a place in Burgos that, as its name indicates, is defined by a structure that was considered divine for a long time. It is a rock arch that the river Nela has been carving for millions of years on which a town has been built. 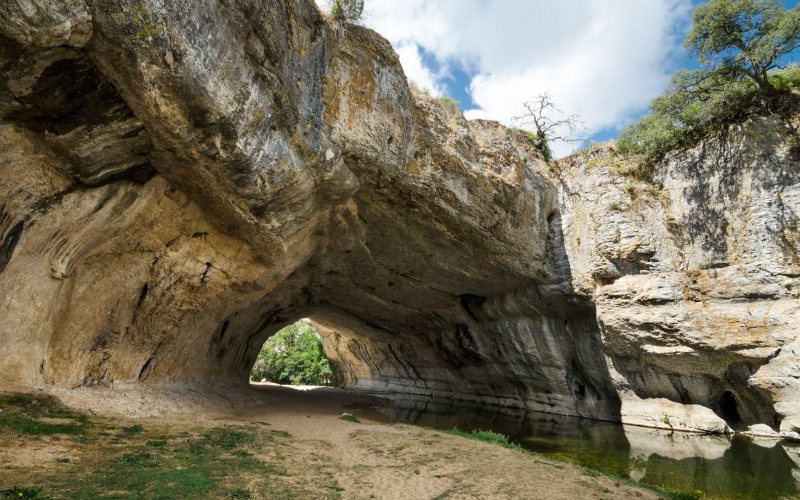 The geographical landmark has been known since the Middle Ages as “Puente de Dios” (God’s Bridge), from which the current toponym of the village derives directly. It is a long natural gallery, which was gradually widened due to the action of the river. The Nela River is in its upper course as it passes through the town, at its source in the northwest, near the border with the province of Cantabria. The effect of erosion is that an elongated hole was opened in the wall. 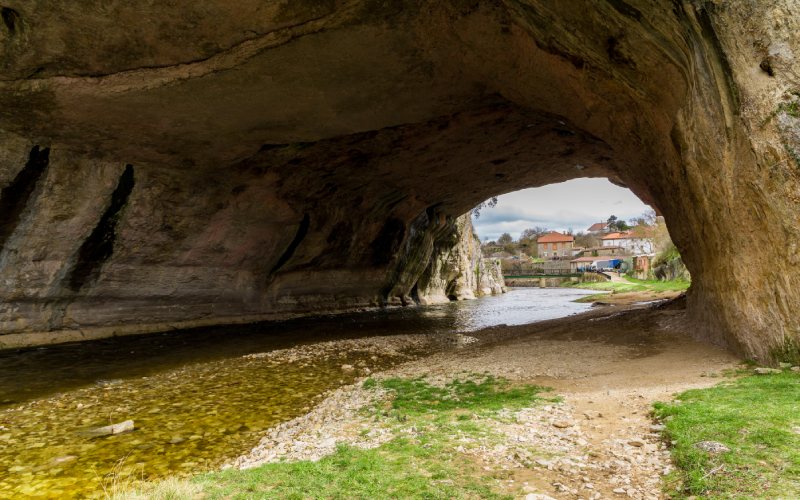 Inside the arch of Puentedey. | Shutterstock

Initially, it is considered that the passage would be narrower and longer. However, it eventually took on its present dimensions. The structure is 15 metres high and over 30 metres wide at its widest point. It also stretches for a total of more than 70 metres. Robustness is undoubtedly one of its strong points, something that becomes clear when one sees both the thickness of the arch and the buildings it supports.

It can be crossed, which allows one to get to know the interior of the enormous stone arch. Something to pay attention to is how loaded the Nela is. During the different times of the day, the reflections of light on the rocks make different shades appear. Therefore, in the same day you can see how the natural bridge varies. It has several cavities, such as the Puerta del viento (wind gate), which is said to have been used to clean the grain.

Puentedey and road crossing over the Nela from where the photographs of the arch are usually taken. | Shutterstock

The monuments of ‘Puente de Dios’

There are written records from Puentedey since the Middle Ages. At that time it is believed that the town was protected by a wall. From this it can be deduced that it was not immune to conflict. Be that as it may, its protection was relatively easy due to the combination of the defensive infrastructure and the privileged orography. In the middle of the 14th century it was under the authority of Aguilar de Campoo. 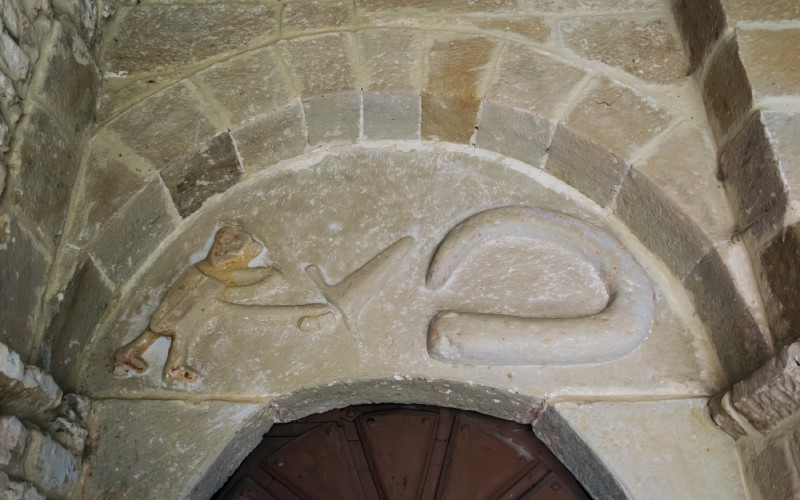 Snake in the church of Puentedey. | Shutterstock

Over time it became a lordship area and later the head of the town council, the Junta de Puente Dei. A hollow in the surroundings of Puente de Dios, the Cueva de los Santos (“Cave of the Saints”), was the place where meetings were held between the leaders of this town, Quintanabaldo and Brizuela. Until 1900, when it became part of the Merindad de Valdeporres, it maintained its municipal status.

Two buildings over the rock arch stand out from this past. The church of San Pelayo still has elements from its original Romanesque period. As is usual in the area, over time it acquired other styles to generate an eclectic whole. What stands out the most is its old façade, in which the image of a snake stands out. It has been interpreted as St. George’s fight with the dragon. However, more folkloric hypotheses have also been launched, tied to a mythical origin of Puente de Dios. 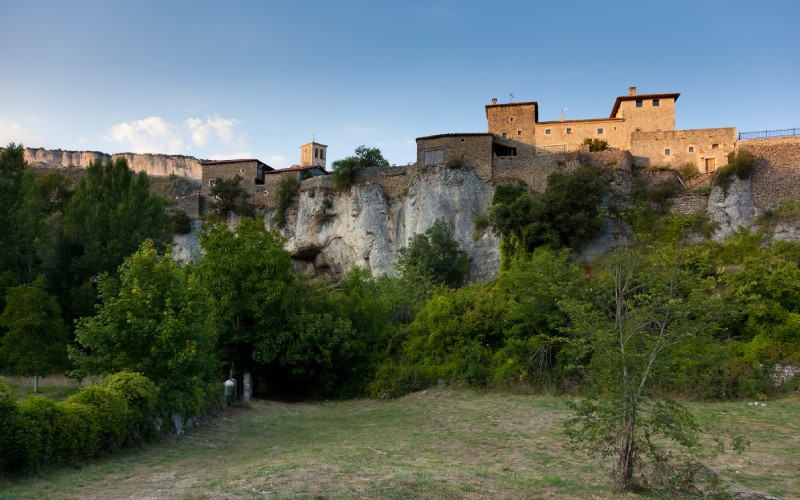 The Brizuela Palace and the panoramic view of Puentedey. | Shutterstock

At the other end of Puente de Dios is the Brizuela Palace. This Modern Age castle was built by the Fernández-Brizuela family and consists of a couple of strong towers. These are joined by intermediate areas, which complete the complex. The family that built it held important positions throughout Castile, from Las Merindades to Madrid. From its original form in the 15th/16th century to the present day it has undergone changes, but still shows a powerful silhouette. Its main warlike actions were related to local revolts in the 17th century.

Puentedey’s location makes it perfect for great hiking trails. Thus, the easiest option is to head north. There, the Mea waterfall awaits and its ravine leaves behind some spectacular postcards. Between stone walls and forests, it presents its best face during the rainy and thawing seasons. In summer and early autumn, however, it is usually lightly loaded. In any case, the rock surrounding the waterfall is always spectacular. It is not even 4 km long in both directions, so it is suitable for everyone. 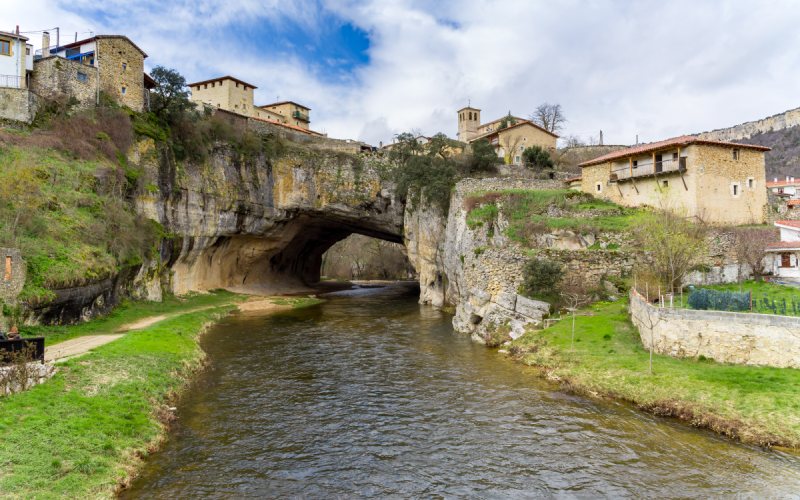 A little further on are the canals of the Dulla. This is a series of deep canyons that are distributed on the border between the Valdeporres and Sotoscueva areas. It is usual to plan a route that starts from Puentedey and returns in a circular way, passing through Quintanilla de Valdebodres. In this case, the distances can be more than 15 kilometres if you want to see several ravines, although you can always shorten them according to your taste. Once again the forest accompanies, in a purely natural environment.

However, the main attraction just a stone’s throw away from Puentedey is the natural monument of Ojo Guareña and its San Bernabé hermitage. Both, already referred to at the beginning, make up a truly unique whole. On the one hand there are more than 400 caves that generate a complex of 110 kilometres of galleries. If you like the telluric formations, the Palomera cave is the best option, since it displays a remarkable range of them. Meanwhile, the temple stands out for being completely adapted to the natural hollow. Modern frescoes narrate the life of San Tirso, the original dedication of the place. 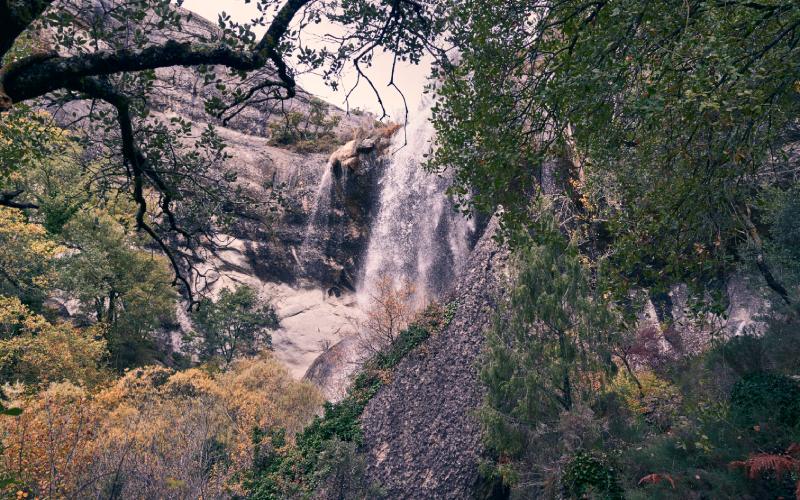 Finally, there are some interesting towns in the surrounding area. Espinosa de los Monteros is famous for the tradition that led it to provide a royal protection corps that was responsible for the night-time surveillance of the Castilian monarchs. Nowadays it is an enclave that stands out for its stately homes and traditional atmosphere. Medina de Pomar, which came to be the capital of Las Merindades, stands out in turn for the Alcázar de los Velázquez. Further away, although equally impressive, Frías rises up on a cliff and has associated nuclei as beautiful as Tobera and its long waterfalls.