The seaside town of Castro Urdiales, on the eastern coast of Cantabria, preserves an interesting an interesting conduction of the artistic and historic which, joined with its beaches, makes it one of the most beautiful and highly-visited places in the province.

Plan your visit to Castro Urdiales

This charming coastal town has been a summer resort for the bourgeoisie since the 19th century. The heritage to be seen in Castro Urdiales gives for a whole day of walks and visits. This includes both the urban case and its beach and surroundings. To extend the trip, one can head west along the Autovía del Cantábrico to visit another beautiful coastal town: Laredo. Another option is to head south to the Collados del Asón Natural Park. Two provincial capitals can also complete the trip: Bilbao and Santander.

In order not to fail when booking room and restaurant there are pages about where to sleep and eat in Castro Urdiales. Finally, the town is ideal for several of the active tourism activities in the province of Cantabria.

To fully enjoy what to see in Castro Urdiales you have to know something about its history. It goes back at least 12,000 years. This human habitation is demonstrated by the remains and paintings found in the caves of El Cuco and La Lastrilla. The port has been used since ancient times, although there is some discrepancy in the chronicles of the Roman period about the people who used it. Pliny the Elder mentioned a “Port of the Lovers”, the name of a tribe belonging to the autrigons.

Others speak of the Sámanos, a pre-Roman ethnic group with a fairly advanced culture, as shown by the bronze sculpture of the Cantabrian Neptune found in Castro Urdiales. Ptolemy referred to the port of Flaviobriga as a “colony for veterans”, recognised as a Roman colony in the year 74. However, it was not until the 11th century that the current name was imposed.

In 1163, Castro Urdiales obtained from Alfonso VIII of Castile a charter similar to that of Logroño. This legal measure promoted a strong maritime and commercial development. It was the first of the Hermandad de las Cuatro Villas to receive this legal title, even before San Vicente de la Barquera, Laredo and Santander. Until 1200, when Guipúzcoa was incorporated into Castile, the Cantabrian ports were the most accessible to the Meseta. Likewise, the Brotherhood was in charge of transporting Castilian wool to the northern markets. On the other hand, its ships played a major role in the conquest of Seville from the Muslims in 1248.

This associative experience must have been very beneficial for them, as on May 4th 1296 it was raised to a higher level. In Castro Urdiales the representatives of eight important commercial towns met to set up a second alliance. The allies would be Castro Urdiales itself, Santander. Laredo, Bermeo, San Sebastián, Fuenterrabía, Getaria and Vitoria. The resulting body was the Hermandad de la Marina de Castilla con Vitoria, also called the Hermandad de las Marismas. The host would be the main headquarters. The following year they were joined by San Vicente de la Barquera.

The aim of the group was to coordinate their common interests vis-à-vis the king, for example by preserving the privileges gained from their contribution to the Reconquest. They also sought to coordinate trade relations with the ports of Flanders, France and England. Finally, they established a pact of mutual defence in case of attack to the ships and merchants of any of them. In general, the Hermandad de la Marina is very reminiscent of the Hanseatic League. It would remain very operational for the next two centuries. It would even generate numerous armed clashes abroad, especially with the British. 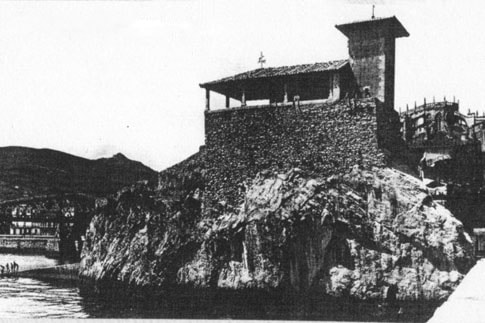 The ships in the port of Castro were dedicated to fishing, trade and Corsican. Time would replace their primitive European orientation towards the Atlantic after the Discovery of America. During the 16th century, Castro Urdiales suffered various calamities, losing quite a lot of population. This could have motivated the transfer of the residence of the corregidor of the Brotherhood of the Four Towns to Laredo. Between 1739 and 1763, Castro Urdiales was separated from this association, joining that of the Señorío de Vizcaya.

During the War of Independence its neighborhood took a stand against the French. In this way it supported the English troops and ships that harassed neighbouring Bilbao. However, on 11 May 1813 it was attacked and destroyed by the Gauls. The recovery of the place began in the 19th century itself. It then became one of the embarkation ports for the iron ore extracted in neighbouring Biscayan enclaves. After that, the bourgeoisie of Bilbao chose it as one of their summer resorts, promoting the architectural renovation of the town.

As in much of Spain, in 1918 the Spanish flu caused a terrible death in the quarter. The help of the provincial council did not arrive, creating a great unrest. The help finally came from the neighbouring Biscay Provincial Council. The fact led to the City Council voting in 1924 in favour of annexation to Biscay, a decision that would have no practical effect.

What to see in Castro Urdiales

The village of Castro Urdiales has the charm and tradition of an illustrious sailing and fishing center. The area of the town extends facing the port and the maritime walkway, which continues and the city expands onward.

In the area of Santander and Ardigales streets and two meters deep the remains of Flaviobriga were found, and many artifact from this zone have been taken to the Prehistoric and Archeological Regional Museum of Cantabria, Santander (which is currently awaiting new headquarters). You can find more information about the area of Castro in this museum between the Paleolithic and Middle Ages, in an archeological room.

The old town of Castro Urdiales, or “Puebla Vieja,” preserved from the medieval period, was declared a historically and artistically significant site in 1978. The center is concentrated around the rocky promontory which dominates the port, visible from any point of the bay. Here stands the Church of Santa Maria de la Asunción, which was recognized as a national monument in 1931 and regarded as one of the most important Gothic churches in the North of Spain. It was initiated in the 13th century and built under the protection of King Alfonso VIII of Castile.

It’s basilica temple floor plan with three naves. In the courtyard there is a Roman military figure (a stone indicating the distance of 1000 steps) which points to the where the roads that joins the old Flaviobrioga with Herrera de Pisuerga, in Palencia. The interior of the church houses many paintings and sculptures, including the White Virgin, a gothic statue in polychrome stone; three gothic images of kings and other three interesting Baroque representations of Christ, the Cristo de la Agonía, a canvas attributed to the painter Francisco de Zurbarán, in the altarpiece of the same name; a Christ lying, and an Ecce Homo, the last two last of which were sculpted in the workshop of Gregorio Fernández.

Facing the facade South of the temple the remains of the Hermitage Romanesque of San Pedro (12th century) can be found, which is where (until the 16th century) the local council gathered to meet. Next to the hermitage is the castle, which is either from the late 12th century or early 13th, and is perched on the primitive Roman fort that gave rise to the town. With a pentagonal floor-plan and strong outside bases, it was the main defensive place of the village. Before the French invasion, in 1841, many inhabitants came to the castle to flee on English ships embarking from the port. Inside, some events and exhibitions are held in a half-barrel vaulted room. In 1853 a light was added to the Tower so that it would fulfill the functions of the port’s Lighthouse.

Alongside the breakwater, on the other side of the Medieval bridge, is the hermitage of Santa Ana, rectangular and with a porch supported by square pillars. It currently hosts the Centre of Interpretation of Flavióbriga. From this point one can enjoy a nice view of the Bay and the port. 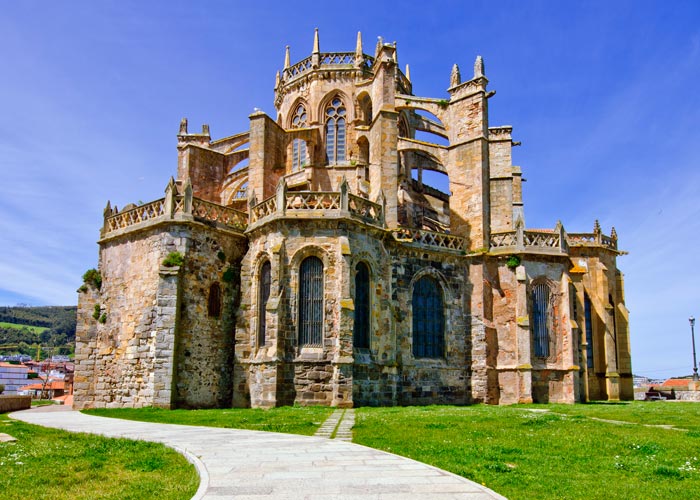 On the seafront you will find the Town Hall, designed by Antonio Vega and built in the 18th century entirely out of stone. It is a three story building framed by two towers finished off with eaves of Baroque imprint that, at the end of the 19th century, were renovated by Eladio Laredo, who crowned the central body of the church with a crenellated tower that altered its original form.

Closer to the main street and Ardigales, one can still observe remains of the old wall with a certain medieval flavor. At the end of the 19th and early 20th Centuries, some powerful Basque families built their summer residences in Castro Urdiales.

To see the most spectacular facade of all, it is worth approaching the pier of Don Luis Ocharán, from where you can see complex Ocharán, an eclectic building reminiscent of the Palladian villas by his arcaded facade, with ten classical ionic columns in double row and side staircase of paired columns. This main facade is decorated with panels of ceramic by Daniel Zuloaga.

Castro Urdiales also has important modernist and other eclectic buildings. One of them is the Chalet Sotileza (1914), the work of Cantabrian architect Leonardo Rucabado, creator of the Mountain school of Architecture. The property is decorated with a tower, balconies and portalada reminiscent of historical Cantabrian houses. Another building of interest is the Hotel Royal, also designed by Eladio Laredo, of eclectic style, located in the center of town. It is decorated with elements reminiscent of gothic architecture, and with others elements referencing the shields of Catholic kings and the Emperor Carlos V, such as the arrows, the harness, and the imperial eagle. Currently it is the site of the Cultural Center of Eladio Laredo and the Ataulfo Argenta School of Music.

Castro Urdiales has been cradle of master musicians since the 16th century. It boasts an important Orchestra of parish principles from the 19th century, and of different corals. Among the village natives, musicians include pianist and conductor Ataúlfo Argenta, to whom the town has dedicated a garden at the port area. In the square, next to the statue erected in his honor, you can hear his music, which sounds all the time through a speaker system.

On the first Friday of July, Castro Urdiales is full of floats for their traditional parade of “El Coso Blanco.” Other festivals remind us of the town’s maritime past, such as August 15, the day of the assumption of the Virgin, when a cooking competition is held in the dock area. Some 300 groups mount their tables and chairs in the Park of Amestoy and cook stews from Nice in their kettles. There is also a Cockaigne contest, that consists of balancing on wooden planks to reach a prize and, after, the music and dance celebration.