On the border between Burgos and Cantabria stands a strange tower. It rises from the waters and seems to be deliberately placed inside the huge swamp. With mountains and a peninsula in the background, the scene is pure peace. However, the story behind this beautiful getaway is more turbulent than it seems. This does not prevent the fish cathedral, as this sepulchral building is known, from being one of the most striking attractions of the Ebro reservoir and its surroundings.

A bit of history of the fish cathedral

What is known today as the fish cathedral is actually the tower of the church of Villanueva, part of the municipality of Las Rozas de Valdearroyo. It was built at the end of the 19th century and, as a temple, it would not have a very long history. The whole area was a crossroads between Santander, Bilbao and Burgos, between mountains and moors. Livestock was the main livelihood, as well as mining. This, although today it has disappeared in practice, meant that industry arrived relatively early. 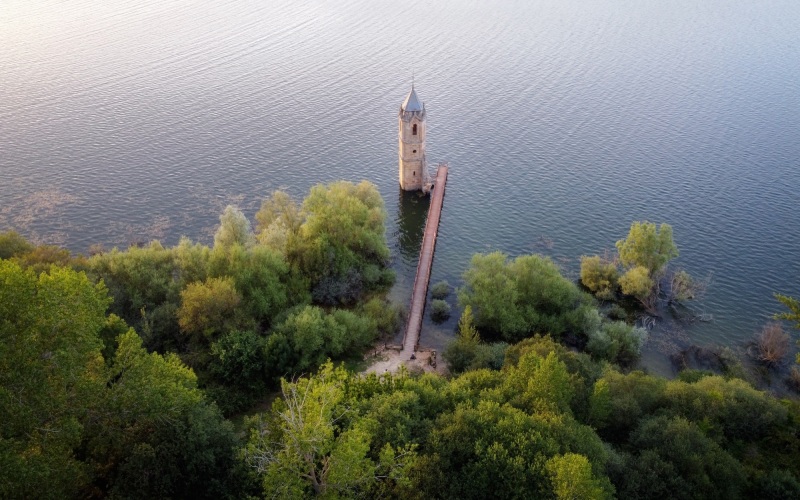 The reservoir and the old church. | Shutterstock

But for the tower of the church of Villanueva to end up separated from its temple would have to wait until the middle of the century. For decades the creation of the Ebro reservoir was planned. This would accumulate the waters of the largest river in Spain in its highest course, flooding meadows and villages. Among the infamous stories associated with reservoirs, such as that of Riaño or Lanuza, the one of this place occupies a prominent place.

At the end of the 40’s the works were finished and it was inaugurated by Franco in 1952. During the whole process, the victims were promised compensation that never arrived. Some of the villages, such as Villanueva, had to move. Thanks to the proximity of its temple to the shore, its tower could be saved. During the last few years it has been gaining fame and thanks to this it has been restored.

The keys of the fish cathedral

Although it is next to a small village, the fish cathedral seems to be very isolated. It is worth mentioning that you should be attentive to the sign indicating the access to the monument. You can go down by car and, after crossing a stone arch, park it next to some wooden guards and an information sign. Once here, to get to the tower you only have to walk along a short path with vegetation on the sides. This leads to the bell tower next to the shore of the Ebro reservoir. 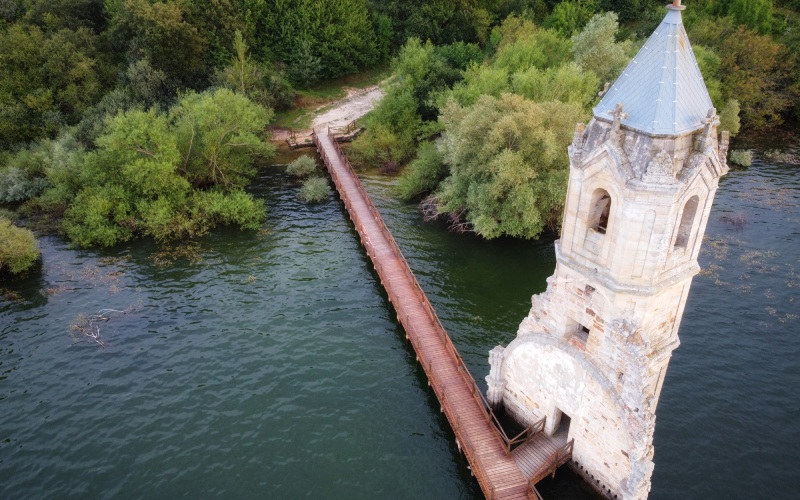 A closer view of the fish cathedral. | Shutterstock

A footbridge allows you to reach its base by entering the waters. At this point the views are already very attractive. However, the highlight is that you can climb to the top of the tower. Several interventions make the building look perfect on the outside and its interior is accessible. From the top the views are breathtaking, encompassing the reservoir and the peninsula of La Lastra. An amplitude that can not be perceived from anywhere else.

Corners near the fish cathedral

The mountain between Burgos and Cantabria is a natural spectacle. Both the region of Campoo-Los Valles and the northwestern end of the Merindades have almost innumerable attractions, very varied. In the foreground is the Ebro reservoir, with landmarks such as the spa of Corconte, several examples of Romanesque architecture, the Roman domus of Retortillo or the peninsula of La Lastra. Reinosa serves as a reference point on the west side, a great base and with all the services to get to know the area.

Moving on to Cantabria, the best option is to visit the Saja-Besaya Natural Park. On the way from Reinosa you can see the source of the Ebro, with its famous Virgin of Pilar. Already in the place there are many routes to make and viewpoints to enjoy, such as the Cardosa. Bárcena Mayor is the only town within the natural area. It is a stone village, very well preserved and where you can taste some of the best mountain ‘cocidos’ of Cantabria. 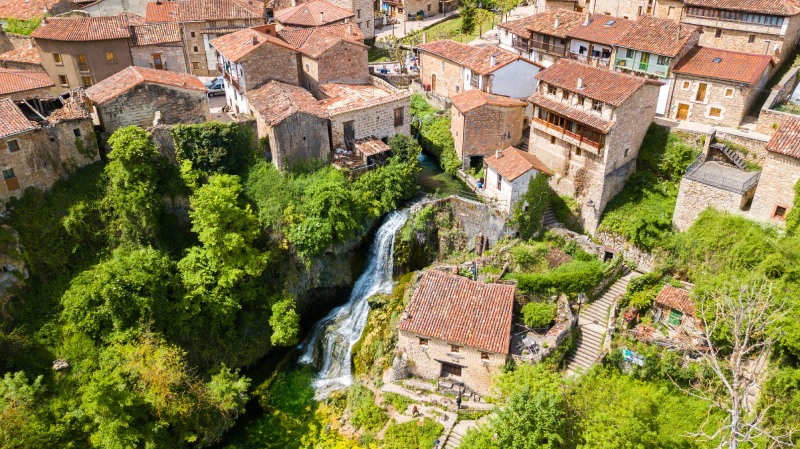 Meanwhile, in Burgos, the entire course of the Ebro offers first class views. Among its gorges there are beech and oak forests, as well as beautiful villages such as Orbaneja del Castillo. Along the river course there are other very varied options. The natural monument of Ojo Guareña for example, a set of caves and an amazing cave chapel. Puentedey, a village around a monumental stone arch, is another nearby option. Another magnificent alternative are the ruins of the monastery of Santa María de Rioseco, Cistercian and next to the roaring Ebro.

A place with a lot of history and beauty 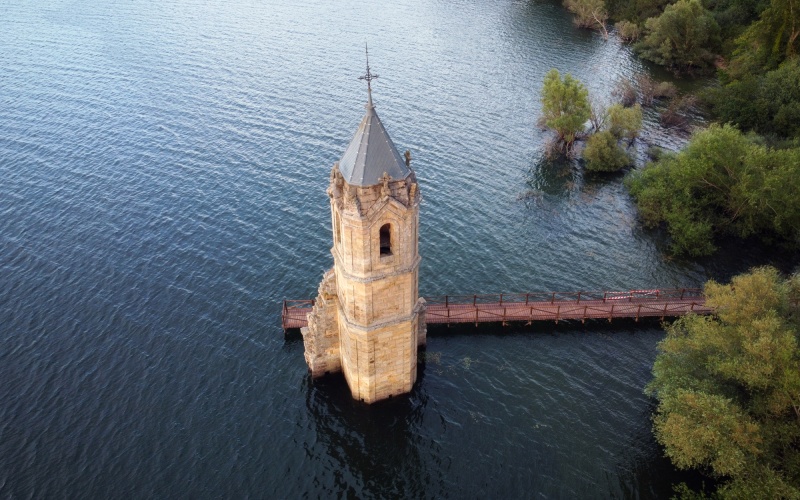 Walking through its walkway you will be able to enjoy its views. | Shutterstock

The cathedral of the fish is an easily accessible place in an area that has a lot to see. A vantage point from which to contemplate a reservoir with a dramatic past and the mountains that form its backdrop. As if out of nowhere, this weekend getaway is a perfect excuse to go up to this strip between Burgos and Cantabria, little crowded and very authentic. In short, there are plenty of reasons to visit this ancient tower.