Located in the lower area of the Asón River, Ampuero is known nowadays for its famous running of the bulls and because the Asón is one of rivers with the biggest salmon population in Spain.

Planning your trip to Ampuero

Ampuero is a municipality with enough charm to spend a exploring for a whole day. You can dedicate the morning to walking between its streets, filled with beautiful houses of the 19th century, ending the visit in the Church of Santa Maria or in the Casona de Espina, In the afternoon, go up to the Sanctuary of the Bien Aparecida to enjoy its beautiful views.  If you have additional time, the next day you can go north to visit Laredo and enjoy its spectacular scenery formed by the Estuary of Treto and the Bay of Santoña. You can also choose to go East, where we find the beautiful seaside village of Castro Urdiales. If you want to try all the gastronomic variety that this locality offers, as well as the best places to sleep, do not forget to visit our pages on what to eat and where to sleep in Ampuero.

Do you want to learn more about this place?

Ampuero was used as as Emporium-from where its name comes from-in Roman times, as a villa in the 14th century. Medieval documents show the existence of a solid metallurgical industry, endorsed by the concession by King Alfonso I of Castile of the Fuero de las Ferrerías (Code of Laws for Iron works), which exempted ironmongers from taxes. There is also evidence that numerous flour mills existed in the area.  Both the ironworks and the flour mills operated thanks to the strength of the river.

At the end of the Middle Ages, the Catholic monarchs changed the route of the old way of Castile, which linked the city of Burgos with the port of Laredo. Ampuero was then a place of passage and of market, experiencing a growth in its economy as it became a place for more commercial traffic.

Despite having no port, Ampuero added to its shield a vessel in memory of Gómez de Gascón, owner of La Pinta, one of the caravels used in the first voyage of Columbus to America in 1492, that supposedly the shipowner himself embarked on. Residents of the port of Santoña, among them Juan de la Cosa, were part of the crew of another of the boats, the Santa María.

At the beginning of the 17th century, shepherds found an image of the Virgin in a hermitage in Somahoz, in the municipality of Ampuero. The apparition of the Virgin led to the construction of a sanctuary to be built and King Felipe V granted the privilege of fairs and markets to the villa that contributed to the construction of the temple. At the beginning of the twentieth century, the Virgin would be named Patron of the Mountain, the current Cantabria.

Things to Do in Ampuero

The village of Ampuero stands in a formidable location, close to the sea and the mountains. It is a great place to rest and to enjoy nature and outdoor sports such as hiking or fishing.

The urban nucleus  in Ampuero is endowed with beautiful houses of the 19th century and built with several bridges. The element that really defines the architecture is the typical viewpoints (glass balconies) of the traditional dwellings, that we find around the square, in the main street and in its surrounding area.

The Parish Church of Santa María (15th-17th century), a Good of Local Interest, has a similar architectural layout as everything that spreads across Trasmiera. With a gothic apse and baroque façade, inside it preserves the gravestone of its founder, the knight Sancho Espina. It has a set of interesting altarpieces and a baroque processional cross, in silver.

On the outskirts of Ampuero, in the district of La Bárcena, you can find the Casona de Espina (17th century), a tower-palace with a spectacular portal that has a figure of two strong men carrying clubs. The construction, now in ruins, was the residence of Don Juan de la Espina, said to be a necromancer and sorcerer, when in fact he was just a collector of curious objects and mechanical gadgets.

The Parish Church of Santa Marina (14th and 15th century), is an interesting site in Udalla, a town of the municipality of Ampuero. With its gothic style, it has the peculiarity of having two apses. It has been declared a Good of Cultural Interest.

In Hoz de Marrón – belonging to the municipality- the Sanctuary of the Bien Aparecida (17th century) is located. The church has masonry walls and ashlar stone which contrasts with the decorative profusion of the baroque, major altarpiece where the small image of the Virgin was placed (because it is only 21.60 cm high), a wood carving of the 15th century flamenco style where they encounter the shepherds. On September 15th, the feast of the Patron Saint is celebrated when visitors complete the tradition of walking up the almost 5 km that leads to the sanctuary, covering the 15 steps that represent the Passion of Christ. The church celebrates the mass and the traditional pilgrimage. A traditional market of food, clothing and other items is also held. The sanctuary is also home to the  International Festival of Santander during Easter. During the month of August, it hosts an interesting program of musical events.

In Marrón, the House-Palace of Escajadillo (18th century), a house-tower with four floors with a long balcony that runs on the main facade.

Many fishing enthusiasts flock to the Asón River every year during the opening after the closed-season to capture the Campanu ( in Asturias and Cantabria, this is the name of the first caught salmon of the season, as the churches chimes the bells to announce it). In the month of September, coinciding with the festivities of its Patron Saint, the Virgen Niña, the traditional bull fights are held in Ampuero.

Solar in c/Comercio, 22 (known as Mayor Street); In the Plaza del Orcón and in the Avenida of Los Tilos, next to the school Miguel Primo de Rivera.  All of them are free

Descent in canoe in the Asón River (Semana Santa), Ascent to the peak of the snow (August 5th), Bowling Championship (September-October)

Spain has many villages and spectacular natural landscapes that are...
>> More information

The former capital of the Nasrid kingdom is one of…

Cable car of Fuente Dé, the most vertiginous ascent of Picos de Europa
The location of Fuente Dé makes it one of the most isolated mountain villages in Más información

Things to Do in Cantabria in Three Days
In the north of Spain, the Cantabrian region offers an almost endless variety of scenarios. Más información

Pantheon and Palace of Sobrellano, a neo-Gothic Fantasy in Comillas
The power of the Indians is present in northern Spain more than anywhere else. Especially Más información

8 fascinating villages in Cantabria
[vc_row][vc_column][vc_column_text]Cantabria has been made to visit it from end-to-end and discover its beautiful villages. This Más información 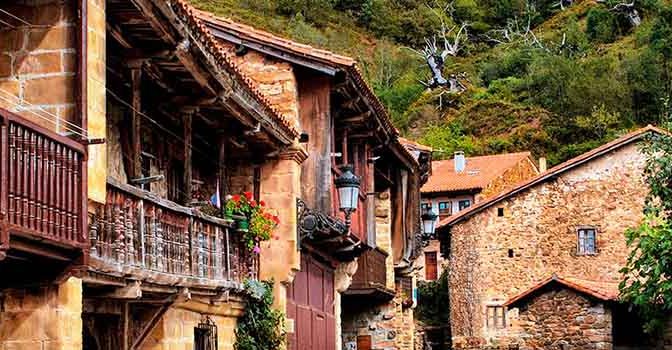 Things to Do in Bárcena Mayor
[vc_row][vc_column][vc_custom_heading text="The Village of the Foramontanos" font_container="tag:h2|text_align:left|color:%23000000" google_fonts="font_family:PT%20Sans%20Narrow%3Aregular%2C700|font_style:700%20bold%20regular%3A700%3Anormal"][vc_column_text]This historic Rural Art Complex located in the Más información