Conquerer of the Most Famous Admirals and Pirates

The city in the world with the greatest pirate and enemy fleet attacks, is an example of collective overcoming. Presently, it is known around the world for its carnivals and the quality of life. A place in where life passes by a little slower than in the rest of the planet. Up next, we will discover the history and a travel guide to Santa Cruz de Tenerife.

The capital of the island and of the province is one of the cities with excellent climate and cultural ambiance year-round. The numerous attractive monuments allow for there to be an extensive travel guide to Santa Cruz de Tenerife. The city is made of very few kilometers. Up North you can find the Rural Park of Anaga, which is excellent for hiking and cycling. If you head South to The Rosarion, you can find great beaches to surf and great options for active tourism. This marvelous city offers a wide oenological sector. Besides licor Ronmiel, it counts with many wine options. These include Abona Wine, the Taraconte-Acentejo wine, the Valle de Güímar Wine, etc.

For whoever wants to get out of the Capital, a few kilometers from the city you can find the historical municipality of San Cristóbal de la Laguna. Another option is visitng the historic belt of la Candelaria. Also, you can take the TF-5 highway and get to know the touristic Port of la Cruz.

The history of this insulated capital is very interesting and is worth reading before reading what to see in Santa Cruz de Tenerife. Though it has been inhabited since the V century B.C., it wasn´t until 1464 when the Castilians departed from the Bufadero beach for the first time. Nevertheless, it wasn´t until 1493 when the situation trully changes. In such year, the administrator Alonso Fernández de Lugo communicated to the Catholic Kings his resignation to the reward for conquering La Palma. In exchange, he asked for the authorization to head towards Tenerife.

The following year in the month of May an army was assembled which built the Añazo fort. However, the admiistratio and his army were defeated in Matanza de Acentejo and had to reship. The fort was left destroyed by theGuanches, but the Castilians returned months later. For it´s strategic position, the port was a point of reestablishment for the ships crossing to America. However, the corsairs and the enmy fleets dedicated great efforts to retain the city. In 1522, the french corsair Antoine Alfonse attacked the port by surprise. Finally, his ship resulted in being caught up to by the artillery, killing him and keeping his sailors as prisoners.

During the years 1553 and 1554 attacks on the French squads Villegaignon y Legendre were produced. Traveling from Brazil, they tried without any success to conquer Santa Cruz de Tenerife. The French corsair Jacques Sores also attacked the place with no success in 1570.

Since 1605 there are news of the costume dances from the Carnival era. Because of this, it is considered that for years they already had celebrations of that nature in the city, The festivity even overcame the periods of dictatorship of the Generals Primo de Rivera (1923–1929) and Francisco Franco (1939– 1975). During these periods, the Carnival of Santa Cruz de Tenerife passed to be euphemistically named “Fiestas de invierno”. Since then, the celebrations included costumes and more modest main events.

On another hand, the coat of arms of Tenerife has three lion heads. This is reminder of the three English admirals that were rejected when attempting to take the location. The rejected included: in 1657 sir Robert Blake, in 1706 sir John Jennings and in1797 sir Horatio Nelson, who lost an arm during battle.

Also in the XVIII century, the Tenerif corsair Amaro Pargo made a great fortune attacking enemy ships. Based on the leyend, Pargo hid his treasure somewhere in the island and it still has not been found. In the following centruy, Ángel García, known as “Dog Head”, became rich and famous because of his robery in African and Caribbean waters. However, when he tried to leave to his town to rest he was arrested by the authorities. Here he was judged and shot.

In 1833, when the danger of the corsary attacks was diminished, the Archipelago capital was translated from La Laguna to Santa Cruz. Passing the capital from a city of rich agriculture to a location that didn´t even have the title of city, and whose poor population lived of fish. The angry citizens of La Laguna began to contemptuously call them “chicharreros”. The Tinerif citizens decided to accept the nickname and began to be known by that name. That domination has been extended to all of the inhabitants of the island, incluiding the ones in the Laguna.

In 1870, Santa Cruz de Tenerife was converted into a tax-free port. As a consequence, installations were established to provide coal to the boats that would transit the Atlantic. Passengers of those ships, became the first tourists in the island. The transfer of fuel, originating from England, was motive of taking advantage of the return of those islands to export their wines and bananas.

The porincial capital was maintained until 1927, when the archipelago was dividen in two provinces. From that moment, he oriental islands became dependant of Las Palmas de Gran Canaria. During the final of the Spanish Civil War, the Canary Islands became immersed in a large period of economic recession. As a consequence, a clandestine migration of habitants was produced. Most of these immigrants headed to Venezuela. In 1983 in Santa Cruz the Canary Parlament was established.

Up next, the travel guide to Santa cruz de Tenerife.

What to see in Santa Cruz de Tenarife

Lets begin with the travel guide. Depending on where you are in this city you can go to one place or another and practice as well different activities. In the North you can go to the Anaga Rural Park to hike and go cycling; by the other side, in the South you can go to El Rosario, in whose beaches you will be able to enjoy surfing. In this last city as well, you have to try the popular Ronmiel liquor, but also wines with designation of origin like the Abona, the Tacoronte-Acentejo, and the Valle de Güímar among others. For those who want to go out of the capital, we recommend to visit the towns of San Cristobal de la Laguna and Candelaria.

Among the many buildings we should visit in this travel guide there are: the San Francisco Church (1777) with a great amount of images of the saints Domingo and Inmaculada in its interior; the Nuestra Señora de la Concepción (from the XVII-XVIII centuries); the San Telmo Hermitage (from the XVI century), located in the Bravo Murillo Hermitage.

There are also many beautiful houses and castles and many other buildings. In the Viera y Clavijo street there are the Casas Consistoriales (1888), with many balconies for the public events. And you definitely have to visit the Carta Palace (1752) that has an elegant clock in its front.

In the Barranco de Santos we find the Nuestra Señora de los Desamparados old Hospital, that shelters today the Nature and Man Museum, about the conqueror times. Lets continue on this travel guide.

The city resisted the many attacks due to the impressive defensive fortresses. These are some of the most important castles: the castles of Santo Cristo de Paso Alto (XVII and XVIII centuries), San Joaquín (XVI-XVII centuries), San Andrés (1706), San Juan Bautista (1644, rebuilt in the. XVIII century), and the Almeida Castle (1884) sheltering today the Military Museum of the Canary Islands. These are some you cannot miss in this travel guide.

In the Republica Dominicana square you can visit the old Asunción School, with a historic image. 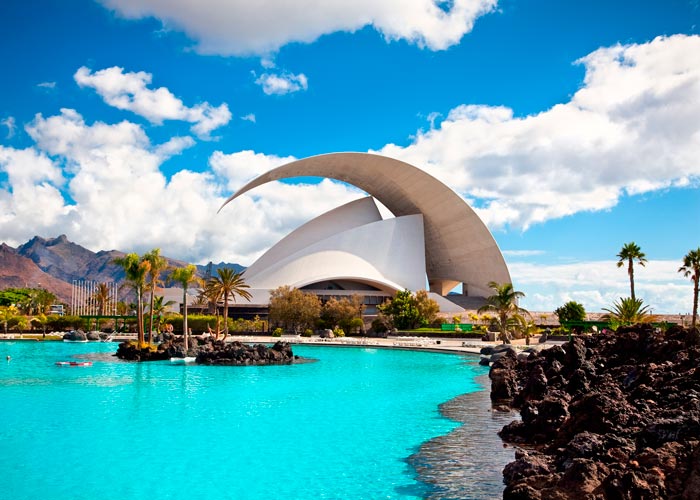 The most important sculptures you can find in this travel guide are in the Rambla. Which include the Glossar Fighter, and in the Architects School the Lady Tenerife.

The Ángel Guimerá theatre (1851-1911) preserves its old look and it is very close to the La Recova Art Centre created in the past with volcanic stone. In the Ruiz de Padrón Street there is the Círculo de la Amistad XII de Enero (1911) artisans sede.

The most emblematic modern building in Santa Cruz de Tenerife is the Auditorio “Adán Martín” (1997-2003). There are also important museums like the Espacio de las Artes (TEA) and the Museo Municipal de Bellas Artes (1933).

If you want to go to the beach, the most popular ones are: Las Teresitas, Las Gaviotas, San Andrés and Añaza.

This concludes our travel guide to Santa Cruz de Tenerife.