The most beautiful valley of Humboldt

The naturalist Alexander Von Humboldt said, in 1799, that this valley was the most varied, attractive and harmonious of all that he had seen in his travels around the world. Today it still attracts travelers from all latitudes because of its beauty and its climate.

Walking through the streets of its two old quarters, the Villa de Abajo and the Villa de Arriba, one discovers a city full of tradition and culture. This municipality preserves a historical-artistic and monumental set whose visit should take us a day.

This place is possibly the best starting point to visit the famous Teide National Park and to enjoy its alternatives of active tourism.

The Guanche menceyato of Taoró included this fertile valley that they called in Guanche language Aorotava. In November 1494 it was the scene of battles between the aborigines and the troops of the Adelantado Fernández de Lugo.

Throughout 1495 some lands were assigned by El Adelantado to soldiers who, together with their families, had accompanied him from the Peninsula and from the neighbouring island of Gran Canaria, keeping a part for himself. In 1506 part of the lands of the island of Tenerife that had corresponded to the Crown were distributed among other settlers. 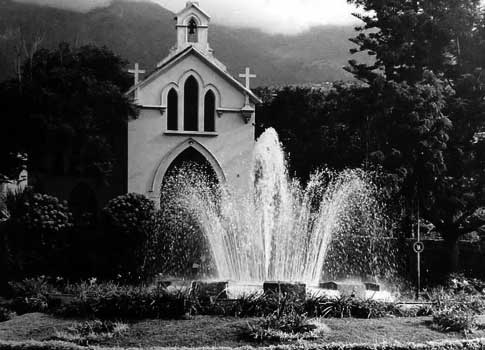 Councillor Diego de Mesa was responsible for the urban planning of the new town, in the style of the Castilian towns of the time, around the Chapel of Acción de Gracias. Another population centre called El Farrobo grew at a higher altitude, being called Villa de Arriba. Both were approached with the arrival of new settlements that were built during the history of La Orotava.

Many important families moved from La Laguna to La Orotava. This progressive arrival of wealthy owners led to the patronage of the religious orders that built the convents of San Lorenzo, San Benito and San Jose. Also churches like La Concepción, one of the main monuments of the island. Because of its proximity to the historic capital of La Laguna the village depended administratively on it, until in 1648 King Philip IV granted it the status of town.

What to see in La Orotava

The most important monuments to see in La Orotava are the churches. The visit begins in the most important to see in La Orotava, the Church of La Concepción (1788). It is a monumental baroque temple with two slender towers in which the dome and the door with decorative details referring to the Caribbean and the Canary Islands by means of the representation of two earthly globes stand out.

In the interior, with three naves, the beautiful altar-tavernacular of classicist lines and the sculptures of San Juan, San Pedro and La Dolorosa is striking. The church was known for its public opposition to welcoming Masonic Christians among its faithful. In this way, it is complemented by the Museum of Sacred Art, El Tesoro de la Concepción. Here a spectacular monstrance and other elements related to the festivity of Corpus Christi are on display.

The Church of San Agustín (17th century) stands out for its wooden coffered ceilings in the transept and the extraordinary altar in the main chapel, presided over by the image of Nuestra Señora de Gracia. Another church to see in La Orotava is the Church of San Juan Bautista del Farrobo. It was endowed with a colourful façade in which its bell tower stands out. We highlight the tabernacle installed in the presbytery, of classicist style.

The Church of San Francisco and the Convent of La Santísima Trinidad constitute an important complex in La Orotava. They are erected on the ruins of a much more interesting building that under the patronage of San Lorenzo was founded in the first decades of the 16th century. The primitive convent burned down in 1801. Thus, in the new factory some elements saved from the fire were reintegrated as the entrance door.

Old monuments in the old town

In that same street San Francisco you can see a Gofio Mill. In the Plaza de la Paz is the Hermitage of El Calvario (1917) with a beautiful historicist front. It is known for keeping the images of San Isidro and Santa María de la Cabeza, patron saints of the town.

The Town Hall occupies the site of the former Convent of San José. It was demolished in the second half of the 19th century and replaced by an interesting classicist-style building. The pediment that crowns the central part of the building stands out.

On Calle Colegio is the Casa Lercaro (17th century) or Ponte-Fonte House, which has a certain Italianate air. It has a spectacular courtyard, a monumental staircase, spectacular balconies, a gofio mill and an exotic garden. 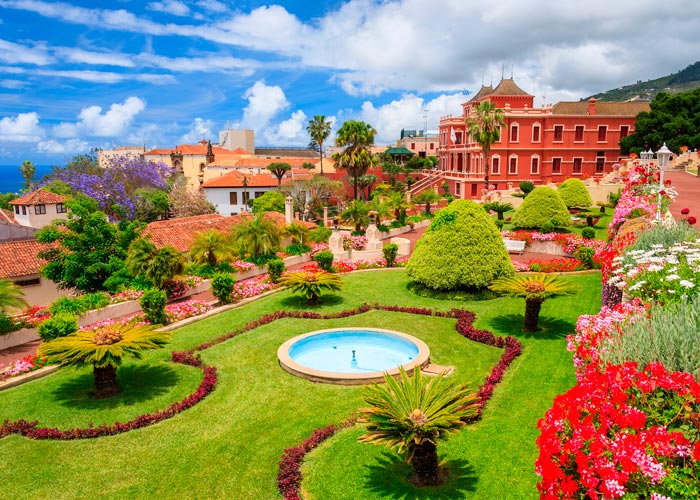 Las Casas de los Balcones are three residences to see in La Orotava, from the 16th and 17th centuries. They are adjacent and located in San Francisco Street. The first two stand out for their elegant balconies.

The Casa de los Molina -once a convent and a centre for fighting cocks- is now known as the Casa del Turista. It is so called because it is a point of sale for handicrafts. It has an ornamented front and a monumental doorway, with classicist reminiscences. In addition the house is the seat of the Center of Documentation and Investigation of Crafts of Spain and America. Also the interesting Museum of the Carpets, on the elaboration of floral carpets in the streets of La Orotava to celebrate the celebration of the Corpus Christi.

The Casa Monteverde also has a monumental façade, a beautiful patio and a spectacular entrance hall. Today, Esteban Rosell’s house accommodates the Hotel Victoria. And the Casa Pierres, located on a corner of San Juan Street, with a beautiful window.

The Casa Torrehermosa (17th century) houses Artenerife, a crafts producer. And the old Casa Salazar (1925) housed the extinct Casino, now the headquarters of the Municipal Library. On its façade the central balcony stands out. The Casa Benítez was rebuilt in 1807 with elegance and balance in a clearly classicist style, with its beautiful patio standing out.

The palace of the Sociedad Liceo de Taoro (1928) is a cultural centre situated on a small hill and surrounded by a striking garden. However, in the same environment are the beautiful Victory Gardens or Marquisate de la Quinta Roja. They house the striking mausoleum of Diego Ponte. Thus, because of his condition as a freemason, he was denied burial in the local cemetery. 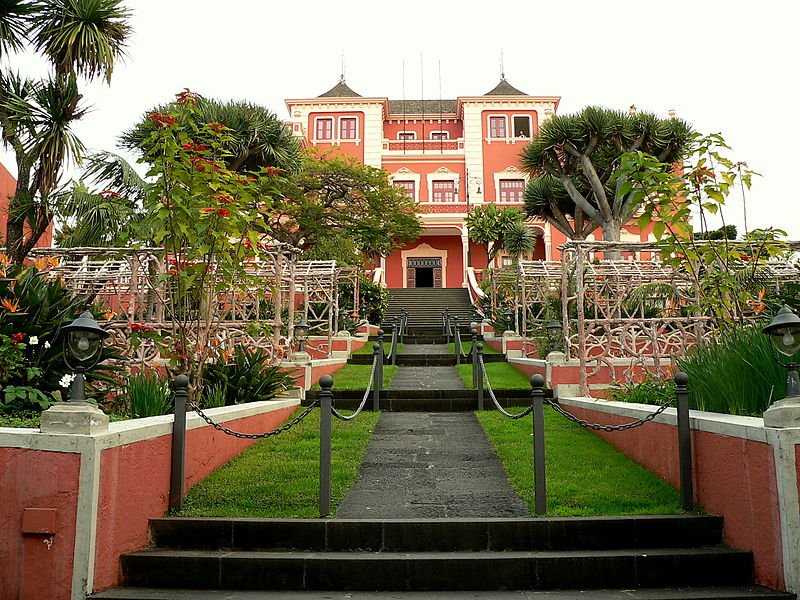 On Tomás Pérez Street is the Hijuela del Botánico, which has supplied the Botanical Garden since the 19th century. The monumental closing with outstanding works in forge calls the attention powerfully. Thus, the Botanical Garden (1788, essential to see in La Orotava) with species brought from the Tropic contains plants and trees of great antiquity.

The Museum of Ceramics of the Casa Tafuriaste (19th century) exhibits kilns from all over Spain. In the cloister of the old Convent of San Benito (17th century) is the Ibero-American Museum of Crafts with objects from Latin America and Spain. For its part, in the Church of Santo Domingo is kept a beautiful flamenco table of the Virgen de la Consolación. However, its choir is also interesting.

In El Ramal is the place known as Oasis del Valle. It is a natural garden where you can taste local products. On the other hand, the Humboldt viewpoint has a sculpture that pays homage to the naturalist who shaped a great specimen of drago, today disappeared, in 1977.

On the outskirts, in Pinolere, you can enjoy a panoramic view of the entire valley. There is also an open-air Ethnographic Museum, highlighting the characteristic straw-coloured houses. It has two sections called the Don Juan González Fariña Canarian Basketwork Museum and the Don Francisco Luis Acosta Pinolere History Museum.

Finally, the main attraction to see in La Orotava is the National Park of Las Cañadas del Teide, which occupies a large part of the municipality. Very close by is the gullied down Corona Forestal Natural Park. It stands out for being full of dense pine forests. There are also two protected hillside landscapes: La Resbala and Costa Acentejo, near El Ancón beach. Other sandy areas in the area are El Bollullo and Los Patos. 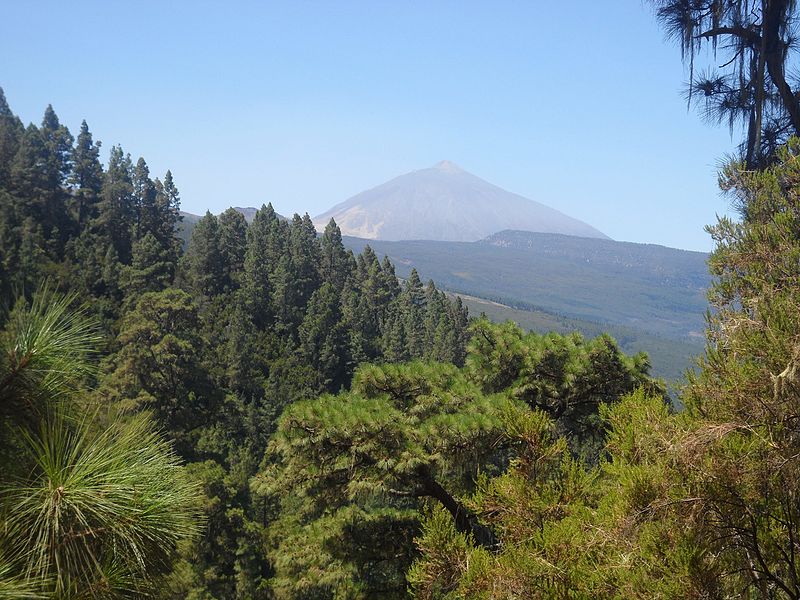 It is advisable to leave the vehicle in the vicinity of the access roads to the town centre.