The geological peculiarities of the Canary Islands unveil a land of great mysteries that never ceases to amaze. Here you will find such fascinating and unknown places as the Barranco de las Vacas, a spectacular volcanic tuff canyon located in the municipality of Agüimes, province of Las Palmas de Gran Canaria. Its sinuous rocky walls and the light and shadows effect reminds us of the Antelope Canyon in Arizona. Although its name does not sound as captivating as that of its American “first cousin”, the Canaries is still an exotic place of great beauty. 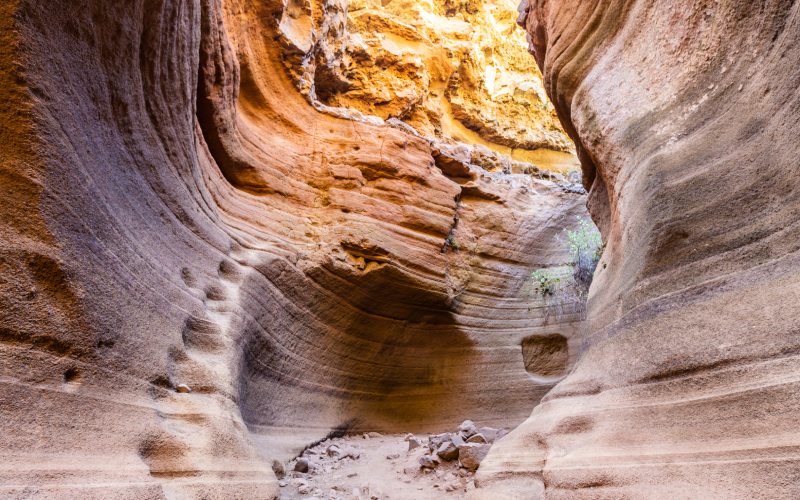 Much smaller than Arizona’s, barely 50 metres long, Barranco de las Vacas is still a very curious environment. Its main attraction lies in its peculiar rock formation, known as “tobas de colores”. This is a type of volcanic rock that is common in the Canary Islands, also known as “toscas”. The average consistency of this type of material was used by the ancient Canarians to build their homes in the surroundings of the Barranco de Guayadeque, close to this geographical landmark. 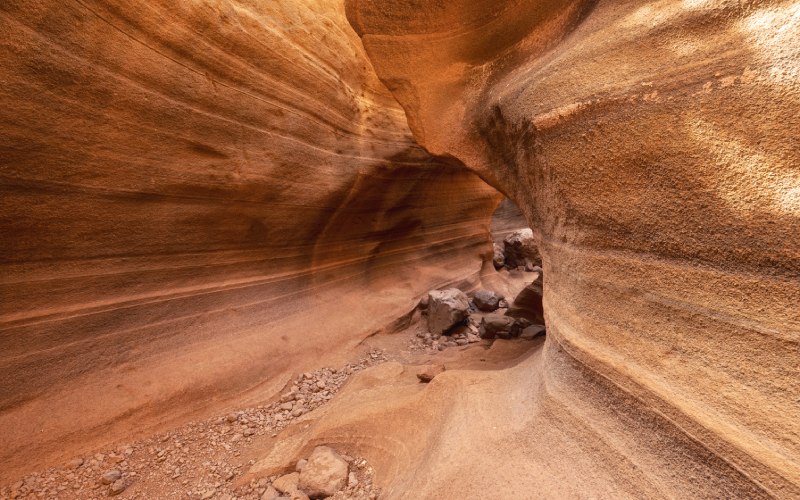 The coloured tuff stand out for their white and yellowish tones, the result of volcanic eruptions. Although they also have a certain reddish colour caused by the action of water on the rock over thousands of years. In fact, this geological canyon was formed precisely thanks to the force of the water. The liquid moulded the rocks until they looked almost as if they were man-made.

The particular access to the Barranco de las Vacas

Reaching the Barranco de las Vacas is not a complicated matter, but it is confusing. That is why anyone who wants to visit it should pay attention to the directions. This canyon is located between the towns of Agüimes and Temisas, about 36 minutes by car from Las Palmas de Gran Canaria. To find the access route to the canyon the GPS search engines accept the term “Tobas de Colores del Barranco de las Vacas”, but never “Barranco de las Vacas”. If you use the last one, the route is usually wrong. 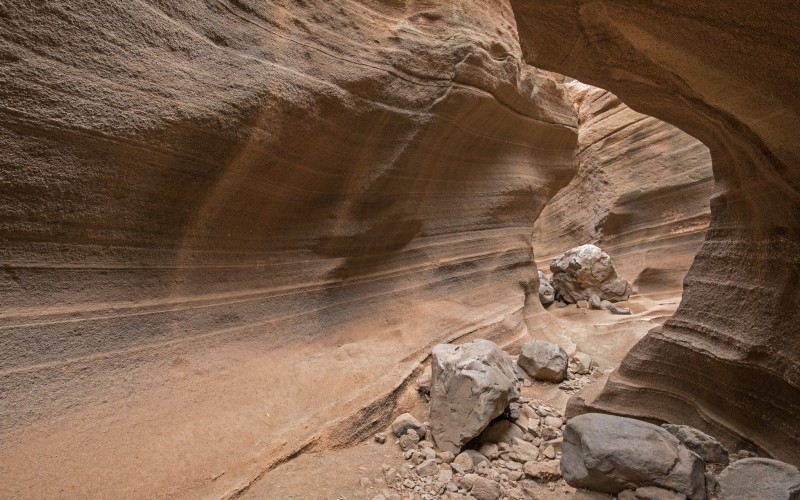 Once the exact path has been traced, the route advances to a stone bridge with a very sharp curve. Just below this is the route on foot to the Barranco de las Vacas. From the top of the bridge you can already see this geological formation.

To descend into the canyon, you must take a path that starts from the main road; approximately 200 metres from the curve. From there to the canyon it is a little less than five minutes on foot with hardly any difficulty. The only thing to bear in mind is that you have to climb a kind of stone wall, something much less complicated than it seems. Once you have overcome this obstacle, you will finally reach the canyon of the Barranco de las Vacas. As it is barely half a hundred metres long, it does not take long to cross it. You must be careful not to trip and avoid going in the rainy season.