The Canary Islands are one of the most popular holiday destinations in the country. Its location, parallel to the African continent gives it warm weather all year round and an incredible environment. On the other hand, one of its greatest attractions lies in its diversity and contrasts. Whether you are looking for beaches, mountains, forests, cities or diving, in the Canary Islands you will find everything on each of its eight islands, each of them offering a different experience that will not leave you indifferent.

The dunes of Maspalomas, Gran Canaria 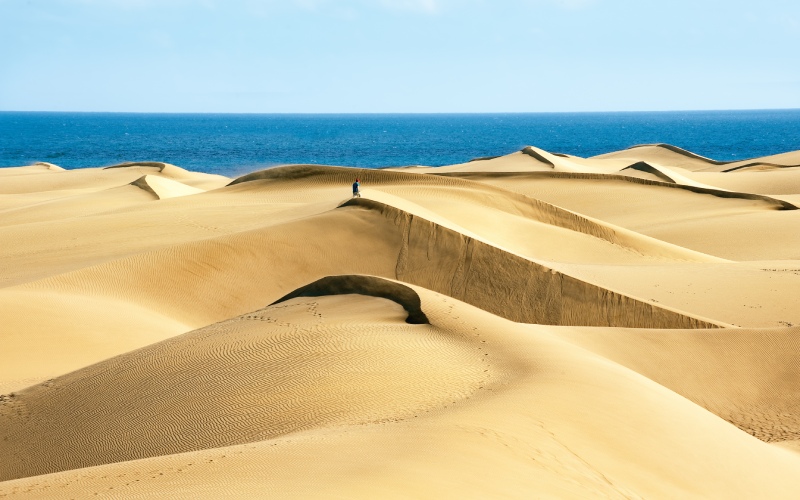 At the southern tip of the island of Gran Canaria is one of the most famous and well-known protected places in the whole archipelago. The Dunes of Maspalomas is an incredible natural space that was named a Protected Natural Reserve by the Canarian government. It has more than 400 hectares with an incredible biological richness. Its dunes, made up of organic sand, turn the place into an oasis that is home to the most popular beaches among tourists, such as Playa del Inglés. It also has lagoons and palm tree forests that will make you feel like you are on another continent.

Teide, the jewel of Tenerife 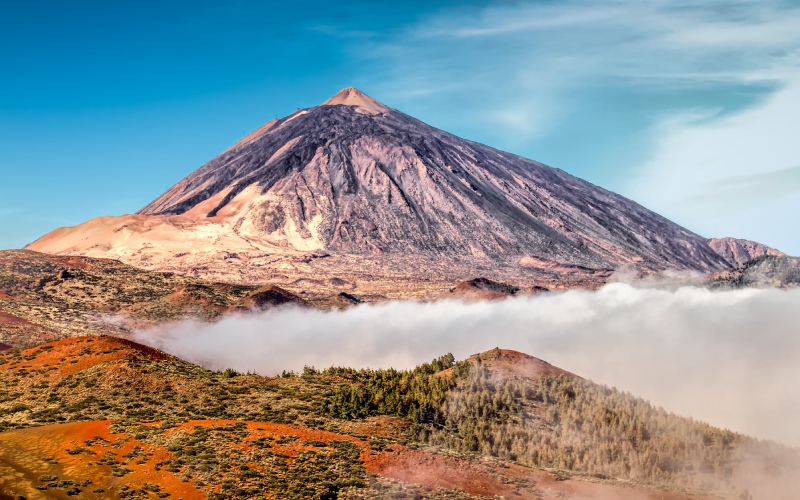 View of the volcano Teide. | Shutterstock

One of the most famous postcards when you think of the Canary Islands is the  Teide, and with good reason. This enormous volcano in Tenerife, with 3,715 metres high, is not only the highest peak in Spain, but one of the three highest volcanoes in the world. It is located in a nature reserve named after it and offers all hikers and nature lovers an authentic Martian landscape. All the Canary Islands have a clear volcanic origin but, in the case of the Teide, it is its volcano that has become the landmark of its entire geography, being the most visited island of the archipelago. 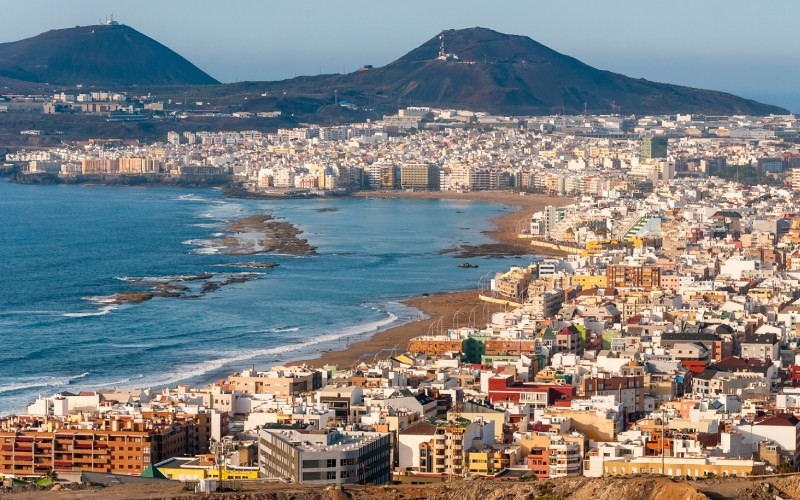 So, it doesn’t all have to be sea and mountains. If you are looking for visits to walk around the cities and get to know the people and their gastronomy, Las Palmas de Gran Canaria is the best place for that. It is capital of the province and the most populated city of them all. Las Palmas de Gran Canaria not only has beautiful beaches, such as Las Canteras beach, but also a historic centre that blends in with the idea of an island. Here you can see the cathedral of the Canary Islands, the Plaza de Santa Ana, the Casa-Museo Colón, the Plaza del Espíritu Santo and the hermitage of San Antonio Abad, and take the opportunity to wander through its narrow streets and soak up the essence and contrasts of the island. 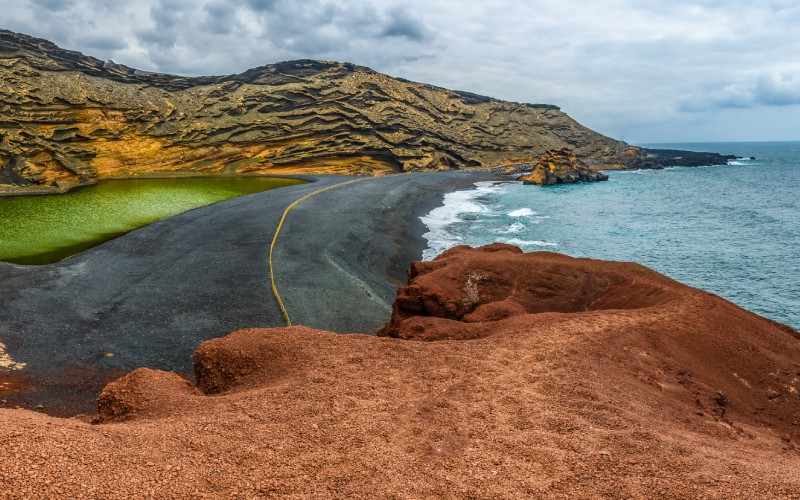 Pool of the Clicos. | Shutterstock

If what interests and motivates you is to get to know volcanoes and landscapes that seem to be from another planet, Lanzarote is your island. It is the island that brings together the most contrasts and attractions in terms of the volcanic earth that makes it up. One of these places is Charco de los Clicos, one of the most unique and attractive beaches in the archipelago. Due to its origin, the sand is completely black. However, the most characteristic feature is the green lake in the middle of the beach, which is nothing more than an old crater that ended up submerged in the Atlantic Sea and which, due to its seaweed-filled bottom, has ended up with an intense green colour that practically turns it into a film set. 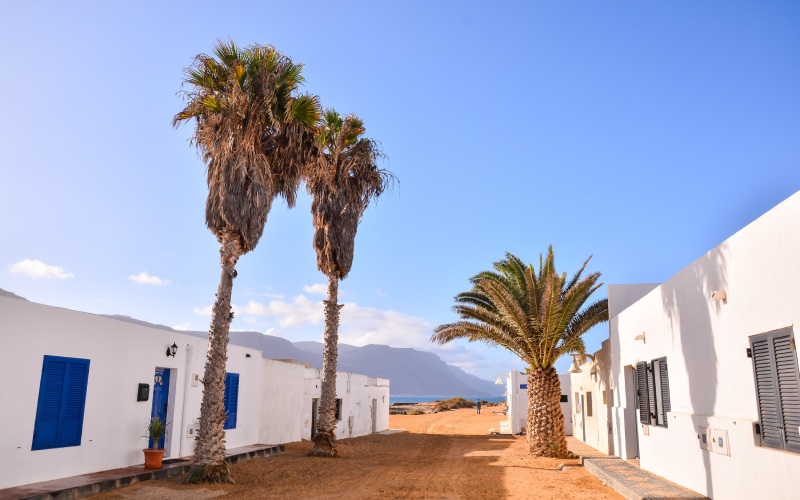 The island of La Graciosa may not be as famous as the three islands mentioned above, but it undoubtedly has the most exotic landscapes of the archipelago and offers tourists a peaceful place to disconnect. Among its main attractions, one of the most important is its main town: Caleta de Sebo. Although it is a fairly quiet place without much infrastructure for tourism, its white houses with blue windows with a single silver window and its crystalline beaches have turned this fishing village into one of the most attractive centers of La Graciosa.

Garajonay, or how to feel like you are in a fairy tale in La Gomera without leaving the Canary Islands 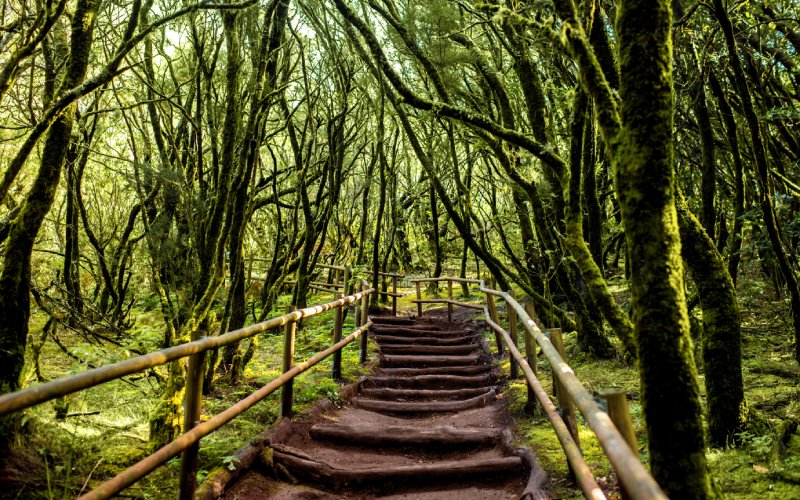 As you move away from the big islands, you will find all kinds of landscapes and contrasts that will make you wonder where you are. In contrast to the dunes of Gran Canaria and the beaches of La Graciosa, La Gomera is home to one of the archipelago’s most impressive forests. This is the Garajonay National Park, with its characteristic laurel forests. Due to its location, practically African, it is a subtropical forest that survives and is maintained on this island. It is a beautiful green forest that will make you feel as if you were in a fairy tale. If you like hiking and want to escape from the big cities, this is the perfect place. 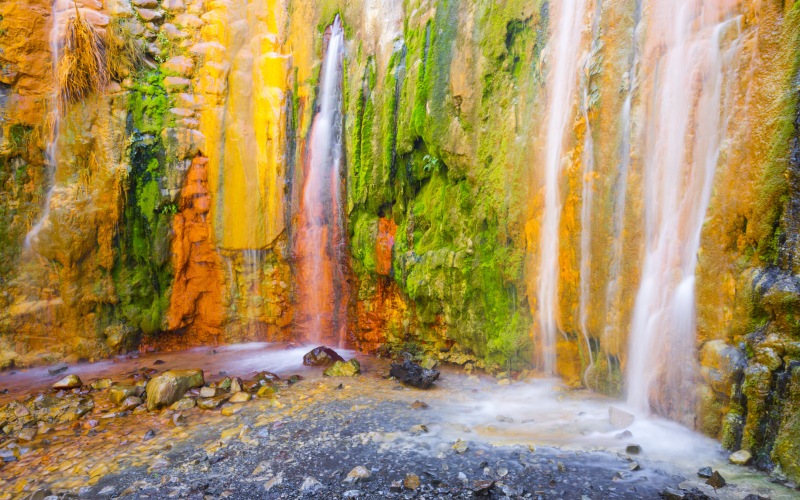 The island of La Palma, if you looked at it from the air, you could easily see how it is made up through a huge volcano crater that made the land emerge from the sea. It is precisely this prehistoric crater that makes the small island one of the most impressive nature reserves in the country. Caldera de Taburiente is a paradise destination for hikers and climbers. It has several viewpoints and routes for all levels, with the Roque de los Muchachos being the highest peak at 2,426 metres. It also has one of the most exotic landscapes. The Cascada de los Colores is very famous, whose coloured waters of volcanic origin are the most photographed on the island. 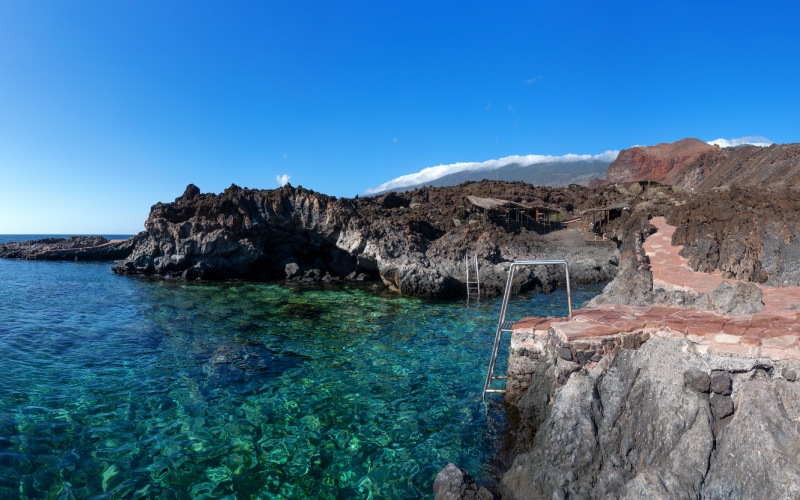 Another little island, but with a huge cultural heritage: El Hierro. If La Palma was ideal for hiking lovers, El Hierro is a paradisiacal destination for scuba-diving and deep-sea diving enthusiasts. Its calm, crystal-clear waters attract thousands of divers every year who want to discover the hidden secrets of the ocean. The La Restinga Marine Reserve is a dream place and one of the great attractions of this small island.

The beaches of Fuerteventura and the Corralejo dunes 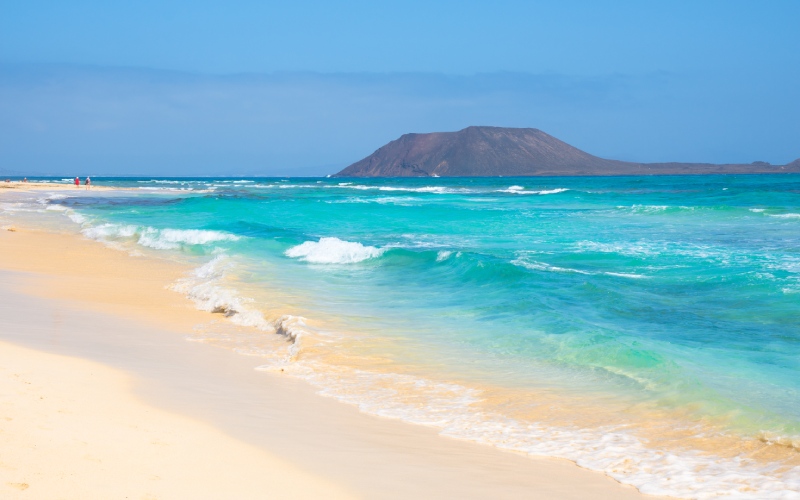 The dunes of Corralejo. | Shutterstock

If what you are looking for in the Canary Islands are amazing and long beaches to disconnect and get away from the big cities and the noise, the best destination to choose is Fuerteventura. Walking through its large, white sandy beaches you will feel like you are in paradise. In this sense, the Corralejo dunes and all the beaches surrounding this desert landscape will become an ideal destination to visit at any time of the year.