Home of the Horse Cave Paintings.

Located on the outer boundary of the town of Deba and its entrance in the area of Zestoa, Ekain Cave is one of the oldest archeological sites of the Magdalenian era in the region. The construction of a wonderful visitor center has made it an attractive educational resource and source of entertainment.

Plan your stay in Ekain

The traveler’s visit should begin in the small urban center of Cestona, where you’ll find the tourism office where you can get tickets. The walk around the town can take an hour, and the walk around its surrounding paths and palaces as well as its spa can take a couple more hours. A 20-minute walk from the parking lot will bring you to the visitor center of Ekain Cave, a modern installation with replicas of cave paintings (from there, the walk is about half an hour). Cestona’s location in the Urola Valley makes it a base for excursions. Farther south, you can spend a day visiting the towns of Azpeitia and Azkoitia, which have very interesting palaces and churches, and the important Sanctuary of Loyola. Take the G631 highway towards the coast to get to the town of Zumaia and its flysch park and abrasion platform.

What to see in Ekain

On September 8, 1969, Rafael Rezabal and Andoni Albizuri explored some small caves on Ekain Hill, on the outskirts of Zestoa. Both of them were amateur archaeologists belonging to the Antxieta Cultural Society of Azpeitia, and they had been drawn to the area by the limestone deposits in Goitzibar Valley. While Andoni was beginning to prepare a sample of one of the caves, Rafael discovered a small hole to his left which was emitting a light flow of cold air. He found that the hole was plugged by some stones that were easily removed, uncovering a passage going into the hill that appeared to be unexplored. After a few seconds of uncertainty, both men crawled into the passage.

Thus, they discovered Ekain Cave, one of the most exceptional collections of Franco-Cantabrian cave art, comparable to other sites such as Altamira and Lascaux. Ekain Cave dates back to the Magdalenian period of the Late Stone Age (ca. 15000-10000 B.C.). In 2008, UNESCO included it in its list of World Heritage Sites on the site “Altamira Cave and Paleolithic Cave Art of Northern Spain.”

The cave is divided into six galleries, named after their content. Here you can find around 70 representations of animals, of which approximately 58% are horses. These horses are characteristic of the later Paleolithic Era, painted with a short mane that stands up, spots on the neck, and a light body. Most of the figures are painted in black and red, while others are engraved. The technical level of the depiction of these animals is superb. Two large groups of horses in particular stand out, which the French historian André Leroi-Gourham defined as “the most perfect group of horses in all of the art of the Quaternary Period.”
The cave is entered through the Erdibide Gallery (“central path”), where the first horse’s head is depicted. The next gallery is known as Auntzei (“place of the goats”), in which you can view four goats, two deer, and a salmon. Next you’ll enter Erdialde (“central zone”), the largest gallery, dominated by a rock mass that forms a horse’s head.
Zaldei (“place of the horses”) is home to the large group of horses, the defining work of the site. In the next gallery, Artzei (“place of the bears”), you’ll find two depictions of bears partially hidden from view. In the final section, Azkenzaldei (“last place of the horses”), there are seven more depictions of horses. 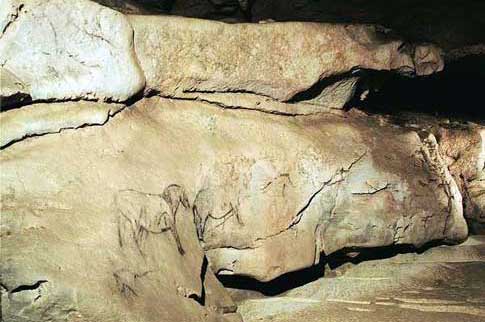 In order to preserve the educational and social function of the site without compromising its conservation, an excellent replica has been built a mere 600 meters away, known as Ekainberri. The Ekain Foundation, which is responsible for the project, has tried to reproduce the paintings and environment of the original cave as accurately as possible, with a careful interpretation of the temperature, sounds, light, and humidity that would have been in the original site. The replica is entered through a modern building made of concrete, glass, and steel. A visit to Ekainberri includes many options depending on how much time you want to invest. You can do the basic visit or opt to participate in the Ekain adventure, a complement to the basic visit that includes several hunting workshops and an interpretation of the territory.
To visit the cave, you have to buy tickets in advance at the Tourism Office of Zestoa or on the website of Ekainberri. We recommend parking your car in the parking lot before the Tourism Office and leaving at least half an hour to walk to Ekainberri through a pleasant and beautiful valley.