The first ferry in the world

This medieval village, which was once the scene of exciting knightly fights, is located at the mouth of the Nervion river. It is known for its ferry bridge, the first of its style built around the world. It is an excellent and interesting place to start exploring the area around Bilbao and Bilbao proper.

Plan your visit to Portugalete

Portugalete is not a tourist town, despite the historic flavor and atmosphere of the streets, and the numerous sites to visit, which can take an entire morning during a walking tour. The rest of one’s trip can consist of crossing the famous hanging bridge and spending the day in the elegant town of Getxo, or else on the beaches of Sopelana or of Plencia. You can also walk over to the neighboring town of Santurce, with the fishing port that still catches the famous sardines from the song. It is also a good choice for those who want to visit the center of Bilbao (with a lower cost of stay) while also avoiding the cost of car parks by taking the quick and easy public transportation. However, the main attraction of Portugalete is the cuisine and the excellent nightlife. For more information, visit our “Eating and sleeping in Portugalete” page.

Roman coins from the 2nd century have been found in the riverbed of the Nervión, in the vicinity of Portugalete. However, the dangerous bar of sand at the mouth of the river should have discouraged the Romans from populating the area. Years later, during the middle ages, it functioned as a small port, after receiving the Charter of villa in 1322 at the hands of María Díaz de Haro, Señora de Vizcaya, although this was lost years later and had to be ratified by Juan II of Castile in 1432.

Throughout the history of Portugalete,it has been the nearest port to the enormous deposits of iron flush in the area of Las Encartaciones, so it was used to ship ore, as well as iron ingots produced by the ironworks and the Castilian wool to Flanders, which was splitting its port as part of a privilege granted in its founding Charter. This comercial advantage ended during the 16th century, when Bilbao snatched the monopoly. Portugalete then started several legal struggles against its neighbor trying to regain their rights on the river trade, but never regained the economic upper hand.

In the middle of the 15th century, the famous banderizo and historian García Lope de Salazar was named Lord of Portugalete. He escaped his captivity in the neighboring Castle of San Martin of Muñatones by prolonging his amazing adventures to the Tower of the parish of Portugalete.

The people of Portugalete were known for their work in helping ships to manage the dangerous sandbar of Portugalete and follow the river inland avoiding the changing banks of sand in the 14 kilometers to get to Bilbao. Between the 16th and 20th centuries the people here were doing continuous works of pipeline and construction of docks, each time more extensive and perfect. These operations were financed in first instance by the Consulate of Burgos and the villa of Bilbao to reduce the number of infrastructural problems and stranded ships. 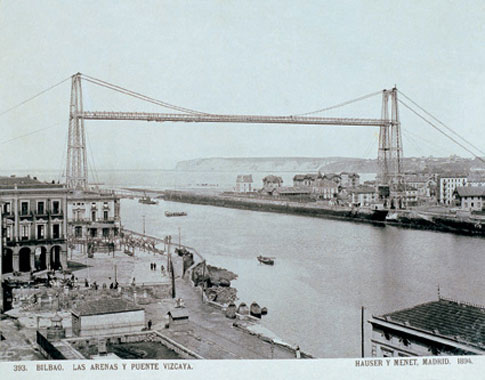 After the “carlista” wars, the 19th century brought industrialization to Vizcaya and, with it, the wealth to Portugalete. Many industries settled in the village causing capital inflows that allowed the villa to expand its urban planning, as well as the arrival of the railway and the construction of important infrastructures as the port dock. Recognized families of the bourgeoisie industrial then began to acquire land to build permanent or summer residences. The villa then joined the other fashionable seaside resorts and beaches, which have now all but disappeared, and acted as a powerful magnet for emerging tourism.

On July 28, 1931 traditional outlaw politicians convened a meeting in the City Council of Portugalete to request the status of autonomy for Las Encartaciones, in response to the Vasco-Navarro in Estella-Lizarra.

What to see in Portugalete

Portugalete boasts sites and appeals of the first order, evidenced by the fact that it shares a UNESCO World Heritage Site marker with the neighboring town of Getxo. Before the need for resorts in both locations the bridge of Vizcaya opened in 1893, an imposing hanging bridge ferry designed by Antonio of Palace and manufactured in iron, that was the first of its kind built in all the world. It was built with a transporter platform that saves sixty meters of length of the estuary. The height of the bridge is sixty one meters and its visage is shocking. It is undoubtedly one of the most impressive modern architectural feats in all of Spain, and a center of reference for other similar bridges in every corner of the planet. The original structure was destroyed after a bombing during the civil war, and was rebuilt in 1941. In 2006 it was declared a World Heritage Site by UNESCO. 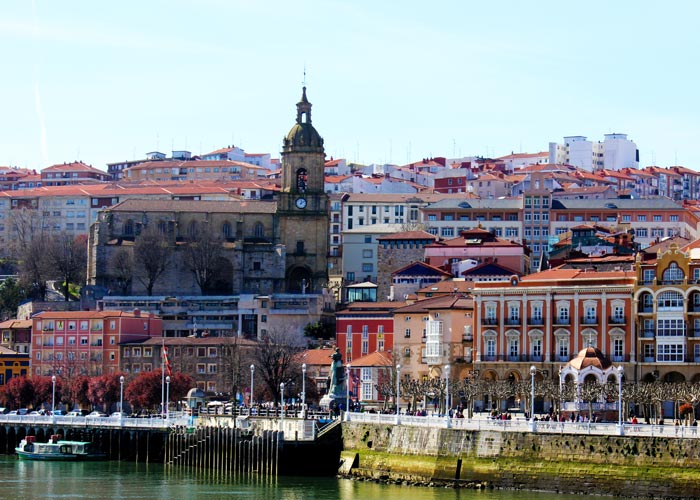 Leaving the basilica one can access the Mirador del Campo de la Iglesia, one of the places frequented mostly for the spectacular views of the river and bridge, which you can enjoy from there. In its gardens you my also find the statue of Lope García de Salazar, a banderizo nobleman who was the owner, Lord, and captive of the Salazar Tower, and the tower old house from the end of the 14th century, which is one of the oldest buildings in the village. It was conceived as a dungeon and housing, and toda is home to a restaurant of high cuisine and a museum on the history of Portugalete.

Leaving from the tower towards Casilda Iturrizar street highlights the Santa Clara Cultural Center. The Center occupies a former Baroque convent, founded by some nuns from Orduña and installed in the village in 1614. It was dismantled in the 19th century during the confiscations.

Finally, in the Paseo de la Canilla you can find the Rialia Museum of Industry, a center of interpretation that seeks emphasize the value and the role of the iron industry in the historical context of the region.

In addition to the bridge of Vizcaya, there is much that see in Portugalete. The town preserves an interesting joint heritage between its Golden Age and the contemporary. Along the main avenues, and particularly on the banks of the estuary, and on Maria Diaz Haro street along the dock of Churruca or Muelle Nuevo, you can see structures that functioned as noble houses of wealthy industrial families in the 19th century. It is a good idea to walk along this road and enjoy these buildings, which are mostly of English influence. These include the houses of Zunzunegui, Olaso, Palacios, Balparda, Vicuña and de Gandarias.

The Park of the Doctor Areilza is a botanical garden with exotic plants.It was designed in 1913 on a beautiful sandy area, which is now lost, that was conceived with great luxury and as an element of ostentation of the bourgeoisie in Portugalete.

The Town Hall, located in the Plaza del Solar, is a neoclassical portico building built in 1883 with traditional iron wrought balconies. Next to it is the monument to Victor Chavarri (1905), of made by the Catalan sculptor Miquel Blay, which won the Medal of gold in the International Exhibition of Paris of 1905. The monument, dominated by the bust of a local entrepreneur, is of eclectic composition, combining deliquescent forms of modernism in the stone of the pedestal with the exaltation of the realism in the figures of the two workers, that is placed in the part front and bottom.

From the Plaza del Solar you can access the old town of Portugalete, declared a monument in 1996 and characterized by its narrow and steep streets, the principal three of the medieval village being Coscojales, Víctor Chávarri (in the middle) and Santa Maria. These routes ascend to the Basilica of Santa María, another monument of cultural interest. The Church was erected in the transitional period from the Gothic to the Renaissance and takes the place of a previous Temple, created for the promotion of María Díaz de Haro. From the original construction it only retains the Virgin Mary that presides over the greater altarpiece, ratified as a Basilica Minor in 1951.