The town of bridges and fishermen

By way of the five bridges in Ondarroa, you can access a fishing village with an interesting historical center, adapted to the steep hill and the bend of the Artibai River on which it is located. It is one of the main points for unloading fish in Basque Country, which is noted in the quality of the food served in its bars and restaurants.

Plan your visit to Ondarroa

Ondarroa is a fishing town with a beautiful historical center. Its port, the Artibai River, the bridges that cross the river, and the historical buildings detailed in the section “What to see in Ondarroa” can be seen in one day. A short distance away, there’s the excellent Saturrarán Beach. For those who want to prolong their stay, the closest option is the seaside town of Mutriku in nearby Gipuzkoa. In the opposite direction, at the end of a winding coastal road, you’ll find the beautiful town of Lequeitio. Despite its beauty, Ondarroa is not a touristic town; it has numerous establishments where you can eat some excellent fish, but lodging is scarce.

Founded in 1327 by María Díaz de Haro, señora of Biscay, the town of Ondarroa fans out around the Artibai estuary. From the beginning, it had an intense fishing rivalry with the nearby town of Lekeitio, especially when it came to the lucrative activity of whaling. It makes sense that during the War of the Bands (14th and 15th centuries), Lekeitio joined the Oñaz band while Ondarroa joined the Gamboa band.

In 1463, the city suffered a devastating fire and was practically depopulated, prompting King Enrique IV of Castile to grant it several privileges in an effort to revitalize it.

A century later during the time of Felipe II, the fleet of Ondarroa reached the highest level of development in its history, with 50 ships for fishing, trade, and privateering. Its maritime splendor would continue well into the 19th century, when its shipyards built a good number of ships for individuals as well as the Royal Armada, while its port became established as an important center for the transport of iron mineral. 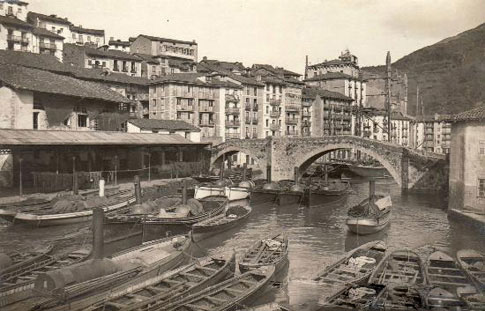 On August 28, 1794, during the War of the Pyrenees, French troops mounted a surprise attack on the city, occupied it, and set it on fire. One hundred and ten houses and the Shrine of San Juan Bautista were reduced to ashes and Santa María Church was plundered. Fortunately, during the 19th century, the canning industry came to the city, giving the local economy an important stimulus that allowed the city to recover.

During the Second Republic in the 20th century, the port was reformed opening up to the exterior of the estuary. Its fleet and fishing activity regenerated after the Civil War, establishing the port as one of the best on the Cantabrian coast.

What to see in Ondarroa

Artibai River surrounds the entire historical center of Ondarroa, passing underneath several bridges, for which reason some have compared the city to Venice. These five bridges are the most emblematic infrastructure of the city. The most important one is Puente de Itxas Aurre, built in 1994 by the famous architect Santiago Calatrava; its majesty has made it an icon of the town. The so-called Puente Viejo is another of the most representative sights in Ondarroa. The current bridge is made of stone and located on the site of the 14th-century wooden drawbridge. It was erected in 1795, rebuilt in 1857, and restored in 1937 after the Civil War. Another interesting architectural element is Puente de la Playa, built in 1927 using iron. It is a revolving pedestrian structure that allowed large fishing boats and masted ships to pass into the estuary. Initially, because it was so original and shortened the route by so much, it cost five cents to cross. For this reason, it received the nickname Puente de la Perra Chica.

The historical center is built on the meander of the estuary, on a rocky hill that required the buildings to be constructed at different heights to overcome the steep slope. This explains the fact that there are buildings just two meters tall on the rear face of the hill and buildings up to six meters in the front. Despite the 1794 fire that destroyed a good part of the city, the typical fishing houses with Basque decorations made after that time and still conserved today led the town to be declared a Conjunto Monumental in 1994. The neighborhood centers around three narrow and steep streets: Goikokalea, Iparkalea, and Haundia. The houses were gathered in deep and narrow plots, the same ones occupied by the old Gothic buildings.

If you access the center by the Puente Viejo, you will come across two buildings: Capilla del Padre Eterno o Padre de la Piedad, a chapel built in the 14th century where travelers could seek protection, and the Old Association of Fishermen of Santa Clara, a unique Neo-Gothic building built in 1920 by the architect Pedro Guimón. The latter is now the headquarters of the tourism office.

From there, you can continue on Calle Erribera to Puente Nuevo. On Calle Erribera, in the middle of a pronounced slope, there’s the Gothic Etxandia Tower. Here you can appreciate a vestibule typical of medieval commercial activity, while the upper floors have the residential design of the era along with the iron balconies typical of Basque architecture. Then you can take Calle San Ignacio, where a narrow and steep staircase will bring you to Licona Tower. Licona Tower (15th century) is possibly the oldest building in Ondarroa, having been left untouched by the 1794 fire. The Liconas were a powerful family who could afford the luxury of building a spacious tower in the city center. It is the best example of this kind of building in the area, and supposedly the mother of Saint Ignatius of Loyola was born here.

Continuing on Kaleandi, you’ll arrive at the main building in Ondarroa, the imposing Church of Santa María, begun in 1480 in the Gothic style. It is built on rock on the original riverbed, and its façade still conserves several of the rings to which boats were secured when they took refuge in the estuary. It has three spacious uniform naves finished with Gothic vaults. On its exterior wall, under the roof, there is a rich décor with gargoyles and twelve 15th-century sculptures known as Kortxeleko Mamuak, which represent the different social classes of the Middle Ages, from the king to the pilgrim, the nursemaid to the rabelero (a kind of musician). Attached to the façade of the church is the town hall, built in the late 18th century in the Neoclassical style, whose most notable element is its sandstone façade. 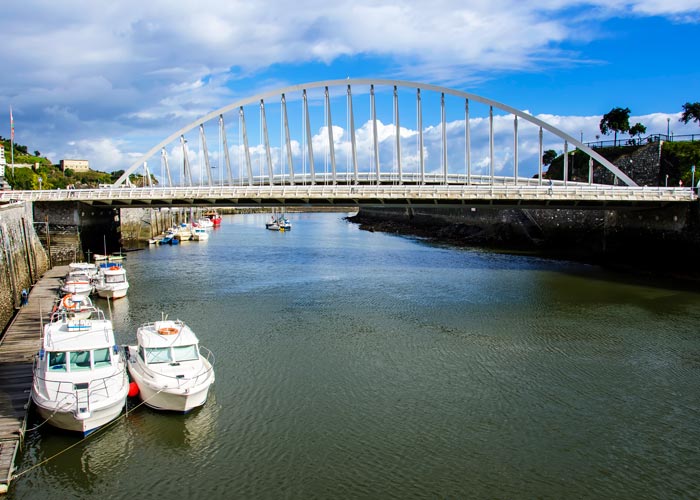 From the church, you can take the picturesque Calle Txomin Agirre or Goikokale. Going up a steep slope, you’ll arrive at Iglesia de Nuestra Señora de la Antigua (patron saint of Ondarroa), built in the 15th century and reformed during the 17th and 19th centuries, when its current bell tower was installed. It is the oldest church in the town and the subject of numerous legends; for example, that its bells could cure mental illnesses. Due to its location at the highest point in the town, it has served as a defensive wall and a lighthouse at different times. There are also two shrines, dedicated to Saint John and Saint Clare, found on the way to the church.

Gastronomically, Ondarroa is known for its fish, but its hake a la ondarresa is recognized worldwide. The hake is grilled slowly in a fish pan and is then covered in dressing—highly recommendable.

La Vera de Ávila The lands of Candeleda are an...
>> More information

The Perseid meteor shower, also known as the tears of…

The Cathedral of Santa María, in Seville, is the largest...
>> More information

Butrón Castle, the biggest romantic fantasy in the Basque Country
The castles of Ludwig II of Bavaria, the Mad King, were made to look like Más información