Marquina-Jeimén received its name by being a historical square that defended the Bizkaia estate from the intrusions of the people from Gipuzkoa, who lived across the border. It is now famous for its architecture and its tradition of playing Basque handball.

Plan your visit to Markina - Xemein

Marquina is not a common getaway destination, which allows this small Basque mountain town to maintain its charm. The main attractions in this town are the majestic mansions and their architecture, which can be seen in a walk through the town in an hour. There aren’t many accommodation options, which is why our recommendations below will be helpful to organize your trip. Since it is an economical place and is in a good location, it’s the perfect place to take advantage and visit the east cost of Vizcaya. On the coast you can enjoy the small fisherman towns and beaches in Lekeitio and Ondarroa, as well as Deba, which is where many Guipúzcoa people live.

Although it can be traced much further back, this town is said to be born in 1952 with the union of the Marquita villa and Jeméin porch.

In 1355, Tello, the bastard brother of the Castilian monarch Pedro el Cruel, who was then also the Lord of Vizcaya, awarded the town with a set of relatively strict rights to fund the creation of an enclosed town in the plains of Aspiltza. Since this town was located on the border with Guipúzcoa, it received the name Villaviciosa (vicious valley) of Marquina. Curiously, the neighboring town Elgoibar used to be called Villamayor (better valley) of Marquina for similar reasons. The Lord of Tello used this idea to respond to neighboring towns that demanded protection from the aggressions and robberies committed by the Guipúzcoan lineages.

This region is full of foundries, which were used to produce cast iron ingots for exportation purposes as well as to be turned into weapons and farming tools in the neighboring valleys of Guipúzcoa. The artisans of Marquina specialized in the manufacturing of harnesses.

The first half of the 18th century marked a period of important building renovations, which changed reconstructed many of the buildings from wood to stone.

In the 19th century, the fad of going to baths and spas was beneficial to Marquina, due to the fact that 2 kilometers away from the town lies natural springs that release mineral and medicinal waters at 27 degrees Celsius. As a result, Urberoaga de Azola, a large spa, was founded and continued to serve clients until the floods of 1984.

If Marquina is known for one thing, it is for being the capital of Basque pelota, especially for their type of basket tip. For more than a century, the most famous Basque pelota players have come from the town, which is what makes its court known as the “University of the Basque pelota,” a tale feature on one of its walls. The actual building dates back to 1798, although it has been remodeled. The culture of Basque pelota in Marquina has allowed other aspects to become famous as well, such as the artisan basket tips and balls.

What to see in Markina - Xemein

There is a lot to see in Marquina, as it is an attractive municipality from an artistic and historical point of view. The obvious medieval influence in the urban planning of the town allows us to see the numerous cases of architectural value, most of which can be found in the town’s three main streets: Guen Kale, Erdiko Kale, and Okerra Kale. There is also some worthwhile architecture on the perpendicular street, Zear Kale. The interest in this street comes from the fact that the Camino de Santiago passed through it as well as the proliferation of luxury real estate that happened during the modern era. The most iconic building is the Iglesia Parroquial de Nuestra Señora de la Asunción, which originally belonged to the monastery called Santa María de Xemeingan. It is a 16th century temple that could be considered one of the most important from Bizkaia and has also been declared a National Monument. There you will find the original bell tower, which is a popular attraction in the town. Its main altarpiece, designed using a mannerist style, depicts the childhood and passion of Christ. Attached to the church you will find another must-see in Marquina, the Cemetery of Marquina-Jeméin(1851), made by Mariano de Lascuráin and declared National Monument of the Basque Country. The cemetery is in order based on a neoclassical design, which was influenced by the Neogreeks and Neoegyptians, a perfect example of illustrated thoughts. The mausoleum of José María Munibe, who was the Count of Peñaflorida, also stands out as an important place to visit.

In the center of the old quarters you will find the Old City Council, a 17th century building with a large porch supported by eight baroque columns, not including the clock tower. The current Town Hall is located in the Solariekua Palace or Mugartegui Palace and was built in the 17th century on top of the old medieval wall of the valley. Its facade features a large shield and a wide eave.

From the same time period, you should definitely visit the Murga Palace (17th century), housed the Bidarte Tower. Nearby, you will also find Patrokua Palace and the Gaytán de Ayala Palace, residence of the Barroeta lineage during the 18th century. The Palace was reformed in the 20th century. It now houses the Tourism Office, among other services.

In the Goiko portal, in front of the current City Council, you will find El Carmen’s Convent and Castle, which was founded in 1691, although not finished until 1724. The temple has three naves and a quadrangular bell tower. On one of the facades, you will see an image of the Virgin of Carmen and the shield of the Carmelitas. The monastery consists of a two-story cluster, which now serves as headquarters to a shelter. 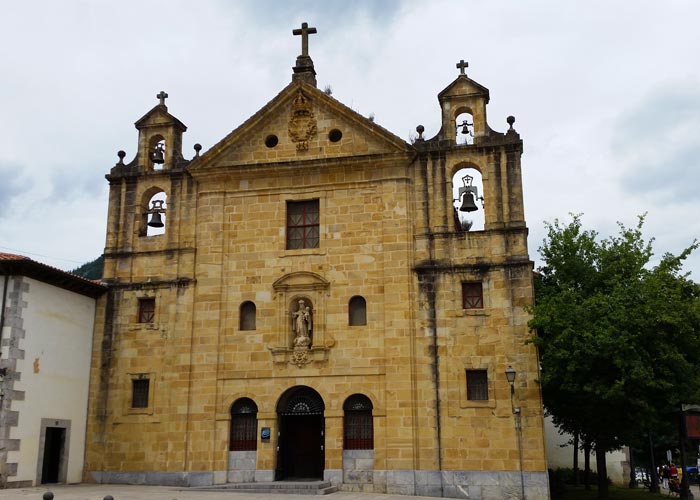 Outside of the city you will find the  Urberuaga de Alzola Balneary, which is currently in ruins. Constructed in 1847, it was formed out of two large buildings that included a hotel, bathroom gallery, and dining rooms. The center closed its doors for lack of clients, although its spring water continues to be bottled.

In the surround towns, you will find Bolibar, where you can visit the Museo de Simón Bolívar, an interpretation center that is located in the Errementarikua workers’ house, which was linked to the Bolivar family.