Tree of the Basques and a symbol of peace

Gernika is a very symbolic city for such a small Basque town. For centuries it was the meeting place of the Juntas de Bizkaia, the first governing body of the territory. It is also internationally known for the bombings during the Spanish Civil War, forever immortalised in the painting by Pablo Picasso. Today it is a communication center from where you can make many excursions to the best destinations in Vizcaya. Visit Spain !!!

Plan your visit to Gernika - Lumo

The village of Gernika is full of museums and a well preserved old town (that was not affected by the terrible 1937 bombing). Gernika is also a knot of communication that connect two banks of the reserva natural de Urdaibai (Urdaibai natural reserve); which in itself requires five days to fully explore. Along the road to the right bank (the east), you’ll reach the turn off to the Oma forest and the Santimañe cave. Following the BI 2237 road gives access to the beautiful towns of Elantxobe and Ea. You can also access the stately village of Lekeitio through highway BI 2238. If you opt for the right bank (BI 2235), it will lead you to Mundaka, a small fishing port of Bermeo and the spectacular San Juan de Gaztelugatxe chapel

Gernika is thought to have been inhabited since the ancient times. Near Mount Kosnoaga there is a site that proves the existence of a fortified settlement from the second century A.D. You can also find ceramics and a bronze Roman Emperor Trajano.

The city of Gernika was officially founded in 1366 by Count don Tello, Lord of Bizkaia and step brother of Pedro I of Castilla. The establishment of the city sought to promote the seaport just a little to the North of the city. Gernika also converges paths ranging from Bermeo to Durango and from Bilbao to Elantxobe. Over these centuries, Gernika grew in commercial prosperity.

Gernika is also well known for being the political center of the Lordship, where the Juntas de Bizkaia, the first governing board of the territory, met since the 15th century. The reunions of this governing board helped give birth to Gernika as a city.

The political activity in the city gave way to the 19th century construction of the important building, the Casa de Juntas de Gernika, built on the old chapel next to the tree. The current oak tree was planted in 2004, but the trees have been descendants of the well known Árbol Padre (father tree), that remained standing from the 15th century until 1742.

In 1882, the small villages of Lumo and Gernika joined together, thus giving rise to the current town. After the annexation, Gernika – Lumo met a new industrial and commercial boom that lasted throughout most of the 20th century. 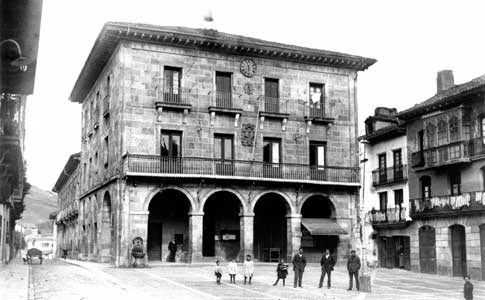 Gernika’s cityhall before the bombing

The most important part of the recent history of Gernika took place on April 26, 1937, when the Condor Legion bombed the town causing countless civilian casualties and destroying a large part of the villa. Among the debris, the Casa de Juntas, the tree, and the Unceta and Cía arms factories (which should have been the main target of the attack) were left standing. The bombing happened shortly after that of Durango, and, although the Durango bombing was more serious, the international press echoed the sentiments of Gernika. The main reason could have been the symbolic role of the town over the years. The tragedy was also immortalised by Pablo Picasso in his prominent work El Guernica, that can be seen, along with the sketches and photographs of the process, in the Reina Sofia Museum in Madrid.

What to see in Gernika - Lumo

Gernika-Lumo, seated in the valley of the Oka River, next to the Gernika estuary, has been declared a “City symbol of peace” in 1987. It is therefore home to the Museum Foundation of the Peace that, through its permanent exhibition, addresses peace from different perspectives. The old city, which was devastated by the 1937 bombing, was rebuilt in the following years with the influence of modern urbanism.

Your visit can begin from the Plaza porticada de los Fueros, in which you can find a bronze statue of the Count don Tello and the City Hall, marked by a high watchtower. From here, through Arte Kalea, you will arrive at the Ferial Gardens that house the Ursolo Fountain, commemorating those affected by the 1937 bombing.

The Casa de Juntas de Gernika, constructed in Neoclassic style designed by Antonio Echevarría in the 19th century, is the most visited building in town. It highlights the main hall and houses works from some of the most important Basque artists of the 19th century, such as Anselmo Guinea and Gustavo de Maeztu. This room houses both political and religious functions. The La Vidriera room contains a 335-meter glass wall, elaborated recently in 1985. You can also visit the Tree of Gernika, both current and previous, in the Casa de Juntas gardens. Close by you’ll also find the Neoclassic Church and the Santa Clara Convent, rebuilt in 1880 with origins tracing back to 1422.

The Montefuerte or Alegría palace, from the 18th century, houses the Euskal Herria Museum, which is divided into various exhibits depicting the history, traditions, sport, and folklore of this Basque region.

Finally, a visit to the Park of the Pueblos of Europe allows you to see works from the teachers of modern sculpture: Gure Aiten Etxea (The house of our father), by Eduardo Chillida and Gran Figura en un Refugio, by Henry Moore. 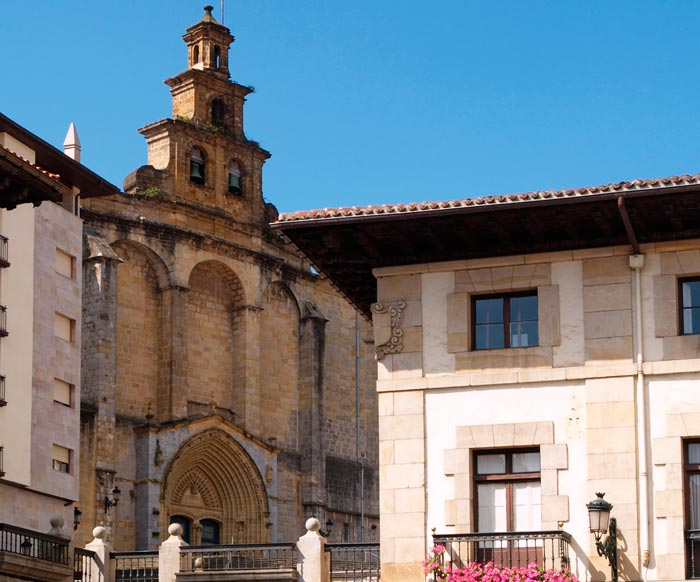 Each Monday, Gernika houses a lively market that is definitely worth a visit. Among them, the first and last Mondays in October celebrate a popular fair, livestock competition, and a sample of machinery and agricultural products.

On the outskirts of Gernika, you’ll find Urdaibai, a natural paradise declared a Biosphere Reserve by UNESCO in 1984. You can also visit the Oma Forest, which served as an inspiration for the Basque sculptor Agustín Ibarrola. Just four kilometres from Gernika, you can discover the Santimamiñe cave, declared a World Heritage city by UNESCO in 2008. Its paintings are comparable in richness and in quality to those of Altamira. Today, the cave is closed to the public and only virtual 3D tours are available upon reservation.