The city that mixes the old and the new

The contemporary part of Bilbao as we know it today was built upon the old church of Abando. This new city to the left contrasts with the botxo (hole) to the right, so called because it is situated in a valley formed by the Nervión and Ibaizábal rivers and surrounded by the mountains.

Plan your stay in Bilbao

Things to do in Bilbao often involve cultural activities, sightseeing and enjoying the gastronomy from the region. Bilbao has an enormous cultural attraction: the Fine Arts Museum,the Guggenheim Museum, and the seven streets from the old Bilbao. Public transportation takes you to the near regions of Algorta (Getxo), Plentzia, Portugalete, Santurce and Gernika. It can take you more than three days to enjoy the things to do in Bilbao. This is why we have decided to divide this marvelous city into two parts: the right side and the left side.

What to see in Bilbao

The right side or city center is full of stores, people and pintxos (small tapas). We would encourage you to go through the city on foot, since finding a spot to park might turn into a very difficult task. You can start this trip by visiting the Atxuri Station (1913), heading to the Encarnación Convent, where you will find the Museum of Religious Art, or go to the Ribera Market. This market is a commercial benchmark in the history of Bilbao since its founding in the 14th century. Next to it, the San Antonio Abad Church(15th century) is located. It was built upon the remains of an old fortress.

The famous Seven Streets of the old city of Bilbao are here in the center. This district is full of magnificent architectures such as Arana’s Palace (16th-17th centuries) and the Stock Building (18th century). Santiago’s Cathedral is also here (built in the 14th-15th centuries): a wonderful Gothic temple considered the oldest building in Bilbao, although the tower and main façade are neogothic (1887). If you keep walking from the Cathedral via Santos Juanes street, you will reach the Unamuno’s Plaza, who was a famous writer born in this villa. This plaza, whose center is occupied by an Unamuno’s monument, is the place chosen by most people from Bilbao to meet up. This plaza also holds the Basque Museum, which is housed by an old building from the 17th century. The museum deals with the history of the city and the different labor, sports and religious activities carried out by the Basque people. Do not forget to pay a visit to the Santos Juanes Church in the plaza, initiated in 1622 by Martín Ibáñez de Zabildea.

The steep streets nearby, via the Calzadas de Mallona, will lead you to Archeological Museum of Biscay, and then to the Begoña’s Basilica (a Gothic building from the 16th century). This temple holds inside the image of the patron saint of the city, the Amatxo. However, you can also opt to head from Unamunos’s Plaza to the New’s Plaza (built between the years 1786 and 1851). From there, there is a short distance to the San Nicolás de Bari Church and the templed devoted to that figure from 1743 (it has five rococo retables mostly made by Juan Pascual de Mena). Nearby, you will find the Arriaga Theater.

The Consistorial House is an interesting building from 1892, standing out by its bell tower and main façade representing the most important figures of the history of the city. Facing the Town Hall, the onset of a walking area leading to the Deusto bridge begins. To the right side of the bridge you will find the Guggenheim Museum and Deusto University. This walking area allows you to take the Artxanda cable car uphill to have a wonderful panoramic view of the city. 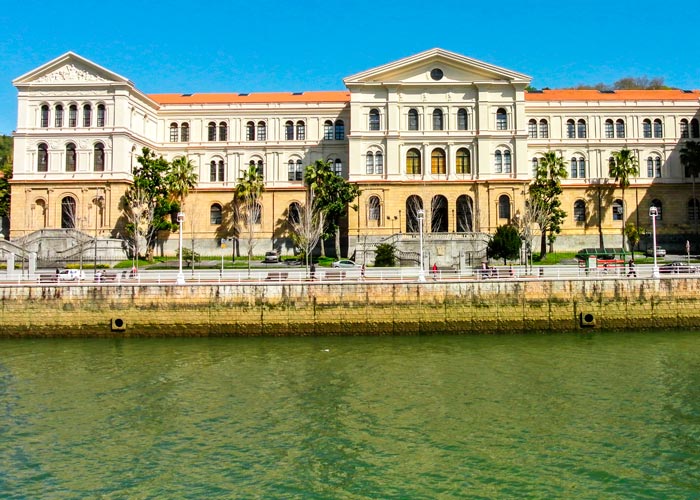 Once you are in the shore of the sea inlet, you can head to the left side of the city by crossing the Arenal bridge (near the abovementioned theater), a spot meant to become the blending of the old and the new parts of the city. From there you will see two important buildings of the new part: the Naja of Santander Station (open in 1902) and the Sociedad Bilbaína Building (1913) which holds the activities of the oldest clubs in Spain, set up in 1839.

If you take Navarra street, you will reach to the Circular Plaza, presided over by the BBVA Tower (1968). The plaza is the beginning of the Gran Vía (main street), in which there is a statue made by Mariano Benlliure in 1890. There are several palaces in the surroundings of this plaza (for instance the Diputación Foral Palace open in 1990). This area is full of commerce and the Foral Library. Continuing the Gran Vía, you will find one of the best examples of the architecture of the 19th century, the Chávarri Palace. At the end of the street you will see the Sacred Heart Monument. At the other side of the Euskalduna Bridge, you can visit the Maritime Sea Inlet Museum of Bilbao, where you can learn about seven centuries of the history of the port activity.

The city’s lungs is facing the Euskalduna, the Doña Casilda de Iturriza Park, which has numerous main sights such as the famous duck pond and the Casilda de Iturriza Monument (1905). At the other side of the park you will find the Fine Arts Museum of Bilbao, holding some of the best works by El Greco, Goya, Picasso and Ignacio Zuloaga among other great Spanish artists. Do not forget visiting the other main museum of the city, the Guggenheim Museum of Bilbao. Outside this magnificent museum, you will find the famous work by Jeff Koons: Puppy (1992), an enormous dog made of bushes and flowers. In the surroundings of the museum there are some other huge monuments: Koons’ Tulipanes (1995) and Louise Bourgeois’ Mamá (1999).

Butrón Castle, the biggest romantic fantasy in the Basque Country
The castles of Ludwig II of Bavaria, the Mad King, were made to look like Más información