The most welcoming city

The capital of Vitoria has been internationally recognized for its ecological sustainability, its services and its quality of life. The city has achieved a great tourist reputation sustained by its past and rich heritage.

Plan your stay in Vitoria

To its extraordinary quality of life, the capital of the Basque Country adds an important old town: two cathedrals, museums and some very unique Romanesque temples. There is, therefore, a great deal to see in Vitoria-Gasteiz. The place is perfect for a full weekend break.

Nearby, in the surrounding Llanada Alavesa, you can enjoy the enigmatic paintings of Gazeo and Alaitza. A little further away is the extraordinary Añana Salt Valley.

Before getting to know what to see in Vitoria-Gasteiz, briefly review its history. The origin of the current Basque capital is located in a village called Gasteiz. In 1181, Sancho VI of Navarre fortified the village, giving it the name of Nueva Victoria. The mission of the stronghold was to protect the surrounding Llanada Alavesa from the Castilians. After an eight-month siege, in the year 1200, King Alfonso VIII conquered it. The craftsmen were concentrated in guild streets: Herrería, Zapatería and Correría. Later, in 1256, new streets were built with the names of more guilds, the Cuchillería and Pintorería, as well as the Judería. 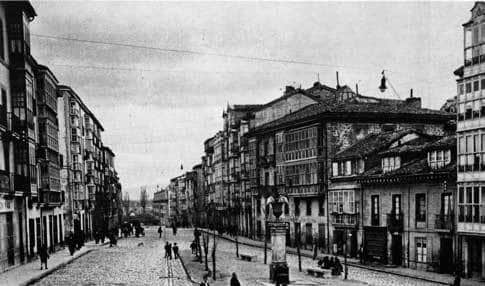 Under the protection of the king, the Vitorians tried to take control of the villages of the Llanada Alavesa from the nobles organized in the Confraternity of Arriaga. Finally, in 1332, the knights of the brotherhood decided to “voluntarily surrender” to the people of Vitoria in order to preserve some privileges. Since then, the city has dominated the politics and economy of Álava, and has also accumulated an enormous proportion of its population. This growth was recognised in 1431 with the title of city, being governed through a royal corregidor.

During the War of Independence, Vitoria played an important role. It was in its streets that the first Spanish resistance against Napoleon took place. Months later, Napoleon also stayed there on his way to Madrid. It would later host one of the last contests of the war, the battle of Vitoria. During the battle, a large part of Spain’s artistic heritage was recovered. The battle reached such a resonance that the composer Beethoven would immortalize it in his Battle of Vitoria.

In 1863 a bishopric was created in Vitoria-Gasteiz that would cover the three Basque provinces. A seminary was also established. Almost a century later, the city was famous for the events of March 3rd. The confrontation between strikers and the forces of law and order resulted in five deaths among the former. The whole city took to the streets during the funerals, in an impressive silent demonstration. Already in 1979, after the approval of the Basque Statute of Autonomy, Vitoria was chosen as the administrative capital of the Basque Country.

What to see in Vitoria

Vitoria can be divided into two parts: the old city (the primitive Gasteiz) and the more modern area built since the 19th century. We would recommend starting in La Florida Park. Next to it, you can enjoy the María Inmaculada Parish, also known as Catedral Nueva (the biggest church in Spain after Seville’s Cathedral). Neogothic in style, this temple stands out by the sculptures placed in the outer part of the church. If you like it, then you must also go by the Diocesan Museum of Sacred Art of Álava, which has a good collection of religious pieces. Near the center, you can see the building of the Basque Parliament.

If you are looking for a great museum, go to the Fray Francisco of Vitoria Promenade, where you can find the Fine Arts Museum of Álava, built upon a neo-Renaissance palace from the early 20th century. This museum has amazing paintings and sculptures from the 18th century to 20th century. We would like to highlight the paintings by Ignacio Zuloaga, Arteta or Echevarría. Facing this museum you can visit the Ajuria Enea Palace (residence of the head of the Basque government) and the Armory Museum.

Now you can go to some of the beautiful Basque plazas such as Plaza of the Virgen Blanca and Plaza of España, which holds the City Hall in the northern part, the residence of King Fernando VII which originated the famous riot in 1808. The Plaza of the Virgen Blanca is the beginning of the old city. From here we recommend going to the Plaza of the Machete (a historical place where people used to sworn into office), where you can visit San Miguel Arcángel church (16th century-17th century), devoted to the White Virgin, patron saint of the city.

Villasuso Palace is also located there (Renaissance in style, which has an interesting tapestry representing Aeneas fleeing from Troy together with his family). If you climb the hill and turn right, you can have access to the viewpoint, to the left of San Vicente Mártir church (Gothic in style, late 15th century). You can have access to the 54-meter height tower builT in the 19th century from where to have a gorgeous panoramic view of the city.

Marchis of Montehermoso Palace, Renaissance style, is famous by being the residence of José I Bonaparte, where he had a relationship with the hostess of the building -it is nowadays a cultural center. A few meters away, you can find one of the best examples of civil architecture from the Renaissance in the Basque Country: the Escoriaza Esquivel Palace (mid-16th century). It was built by Fernán López de Escoriaza, who was the doctor of the Emperor Carlos V, Catalina of Aragón and her husband Henry VIII of England. 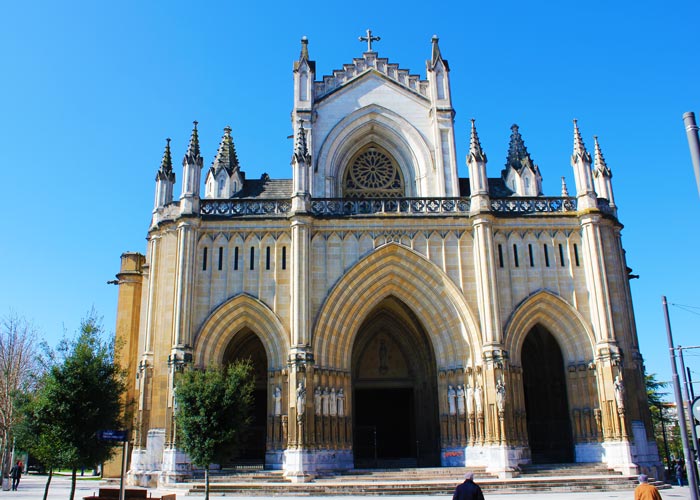 The most important building in the old city is the Old Cathedral of Santa María, built in the 13th-15th centuries upon the fortified hill where the city was set up. Built using a gothic style, this temple has been declared an Artistic-Historical Monument. The interior holds the outstanding Van Dyck’s Descent from the Cross. One of the most important tourist attractions in the Basque Country is the innovative program to visit this temple throughout the different stages of constructions of this church. Visits to the cathedral can be bought on the official website of the Vitoria’s Cathedral Foundation. The walls there (11th century) have been hidden by houses for centuries; however, they have been recently repaired.

Near the walled enclosure lies the Hurtado of Anda Tower (15th century) and the Portalón (also from the 15th century) which is now a restaurant. Bendaña Palace houses the Fournier Museum: a collection of decks of cards from all over the world. Its origin is linked to Heraclio Fournier’s factory of playing cards, established in 1864. Nowadays, the Fournier Museum and the Archeology Museum has been annexed to the BIBAT, a modern cubic building (2009) that integrates those spaces.

Discover Vitoria with its museums

Another important museum in the old city is the so-called Artium, Contemporary Art Basque Museum, which was set up in 2002. It exhibits a collection of the best modern and contemporary Spanish paintings, engravings, sculptures, pictures, videos and installations. You can find here works by Salvador Dalí, Pablo Picasso, Joan Miró, Jorge Oteiza, Carlos Saura or Miquel Barceló.

In the Cuchillería street we find the Cordón House, built by a converted Jew called Juan Sánchez de Bilbao in the 15th century. It must have been quite friendly back at the time, since many important figures have stayed here -among them Philip the Handsome and Joanna the Mad.