Tren de Sóller is one of the main tourist attractions of Mallorca, a wooden railway that connects Palma with Sóller. The project for its construction began at the beginning of the last century and it was officially inaugurated in 1912. Today, it is one of the few private railway lines in Spain and is of great tourist interest. It stands out for its use of machinery from the beginning of the 20th century.

The railway line has a curious and deeply rooted origin and history in the area. It also plays a major role in the history of the Spanish railways. As well as still using its original machinery, its change from a utilitarian to a tourist line is a good example of the adaptation to the present of transport services that are already outdated.

Origin of the Tren de Sóller

At the beginning of the 20th century, the town of Sóller was isolated from the rest of the island due to the mountainous environment of the area. The main obstacle was the Sierra de Alfabia. This prevented its development, due to the difficulty in transporting goods and passengers to the port of the city of Palma. This was not uncommon, the same happened in villages of the Ancares like Piornedo or in villages of the Pyrenees like Os de Civis. 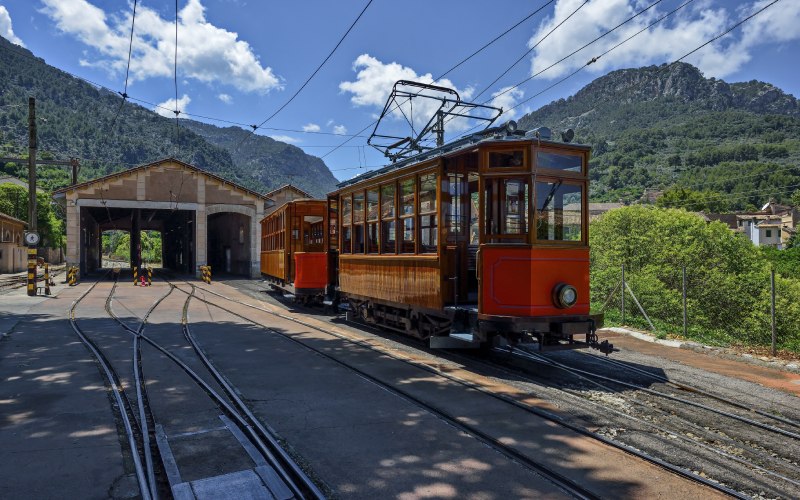 To get there, it was necessary to cross a tricky path of unevenness and narrowness with mule-drawn carts. For years, the provincial deputy of Sóller, Jerónimo Estades, requested the implementation of a railway system to speed up the route. However, the project was discarded due to its high cost.

In 1903, an influential industrialist from the town again proposed the construction of the railways, this time a track that would go directly from Palma to Sóller. It would also have a tunnel that would cross the Sierra de Tramuntana. At first the idea was not carried out, but once again Jerónimo Estades took charge of the matter. He publicly proposed it in Sóller town hall in 1904 and received the support of all the inhabitants.

The construction of the railway was assigned to the contractor Luis Bovio, who bought a small locomotive from Ferrocarriles de Mallorca for this purpose. Such a machine was used years before as a shunting tractor in the port of Palma. Interestingly, the vehicle was named María Luisa in honour of her daughters. 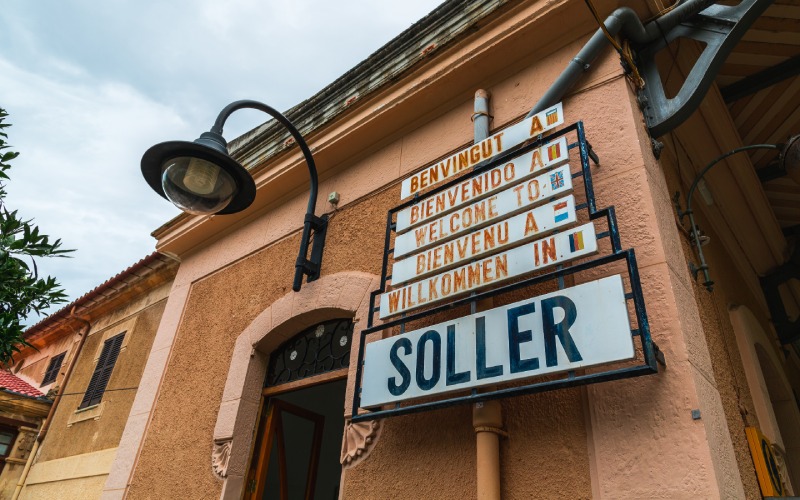 Different directions in the old railway station of Sóller. | Shutterstock

In 1907 work began in both Palma and Sóller. It took them a year to reach the most complicated area of the route: the Alfabia mountain range. After digging numerous trenches and tunnels, the María Luisa locomotive crossed the sierra and reached the Pujol de Banya viewpoint. In September 1908 the first work train managed to reach Sóller from Palma.

It was inaugurated in 1912 with two locomotives, Sóller and Palma. The third was still waiting for approval, called Bunyola. A year later, a fourth locomotive was added under the name of Son Sardina. Years later, the railway was also used by the Sóller Tramway. It was in 1929 when electric traction was inaugurated along the entire track, and the first tourist services were provided.

Historical use of the Tren de Sóller and its decline 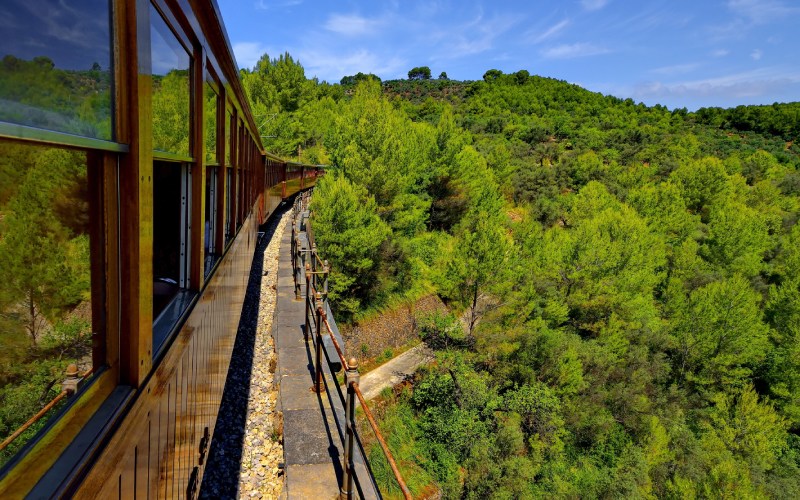 Tren de Sóller was a genuine revolution for its inhabitants. | Shutterstock

The Tren de Sóller journey took one hour. This was a genuine revolution for the inhabitants; as they were able to travel to the capital in a short space of time. It was the perfect means of transport to speed up communication between the two sides, leaving behind the long and winding path of years gone by. In addition to its great usefulness for carrying goods and passengers, it was a connection point between the heart of Sierra de Tramuntana and the rest of the world. In other words, it had an important use for correspondence, as it speeded up the sending of letters in an extraordinary way. 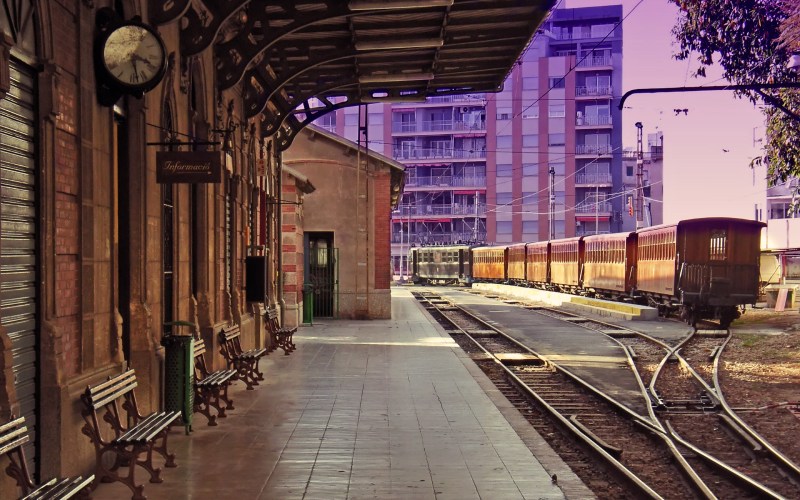 One of the curiosities of the use of the train is that in 1912 the Correos y Telégrafos company installed mailboxes in some of the carriages. In this way, people could take advantage of their journeys to deliver their mail. Moreover, in 1915 the last carriage was used exclusively for the delivery of parcels and letters. Correos operated in the Tren de Sóller until 1991; the year in which it abolished the travelling mail in all of Spain.

With the arrival of new transport infrastructures on the island of Mallorca, the train began to fall into disuse. Lorries gradually replaced the train. In 1994 it officially stopped working on a daily basis and in 1997 it stopped being used completely. Buses and cars made the Tren de Sóller obsolete.

A journey through time in Sierra de Tramuntana 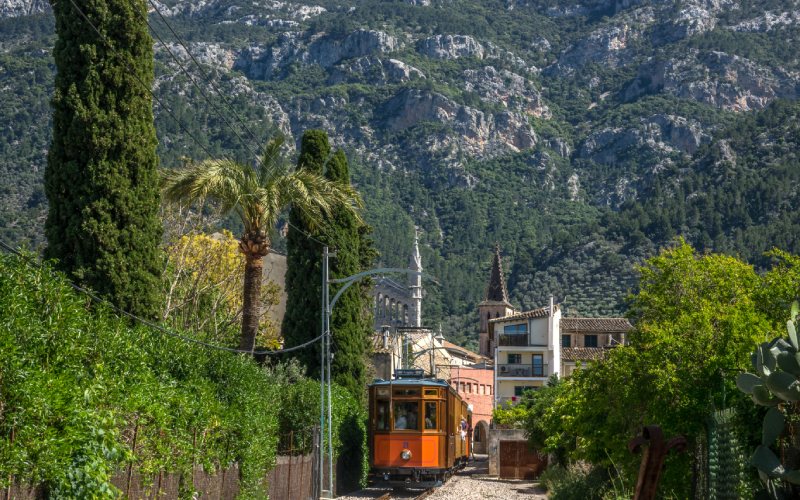 At the beginning of the 21st century, a group of local businessmen bought the train to make a tourist use of the railway. In this way they would take advantage of the holiday scene on the coast and the rural setting of the area. This meant that it did not fall into complete disuse and also avoided the closure of numerous businesses. After improving its infrastructure for the use of visitors and reaching agreements with several tour operators, the Tren de Sóller has today become one of the main tourist attractions in the area.

There are two main reasons for this. On the one hand, it is a charming tram loaded with history. On the other hand, there are spectacular landscapes along the route. It is also known for continuing to use the original machinery of the 20th century. Recently it has been included in the European Federation of Historic and Tourist Railways or FEDECRAIL. 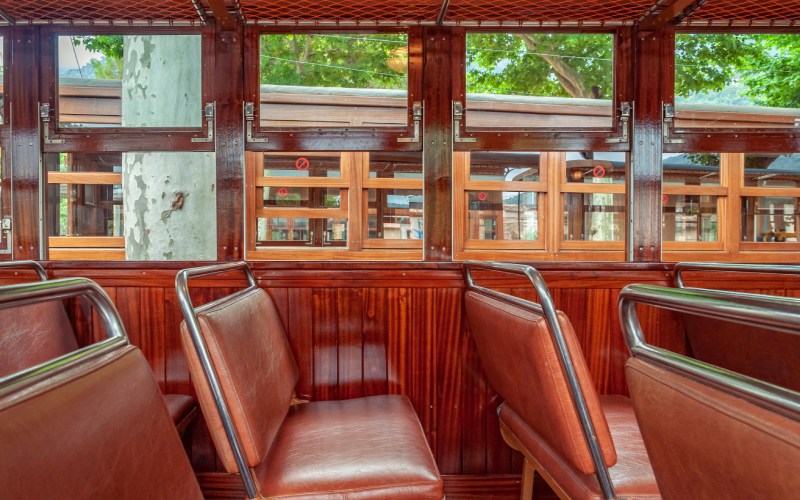 Today the Tren de Sóller is used as a tourist attraction. | Shutterstock

From the old train it is possible to acquire a new perspective of Sierra de Tramuntana. Not surprisingly, it was declared a World Heritage Site by UNESCO, thanks to landmarks such as Gorg Blau or the Pareis torrents. Thus, the railway becomes a real monument on wheels. A vivid memory of the importance that this infrastructure had in the area, with a great historical interest thanks to its curious origin. A perfect plan to get to know Mallorca and to visit its most famous mountains.