The first glimpse of Puerto de Vega may well seem like that of an impressionist painting. Brushstrokes of sea, sky, land and seagulls stolen from Sorolla‘s hand. A composition of light and Cantabrian aromas that outline the silhouette of this town located in the council of Navia.

The western coast of Asturias treasures lots of wonders that follow one after another, like a domino. A game in which Puerto de Vega has a double score. On the one hand, that of its rich heritage, history and nature. On the other, that of that special charm that is perceived more in the short distances.

Beginning with the dock, drawn by small boats, and moving forward through the streets in the heart of the port. Puerto de Vega has many places to discover. Travelers promise to let themselves go and get ready to be surprised by the way, wherever it leads. Perhaps following the murmur of ancient Indian footsteps, until you reach a viewpoint that opens to the wind. Or glimpsing the coming and going of the tides in one of its wonderful beaches and flowing like water to some enchanted gardens. Let the journey begin!

The heartbeat of a port 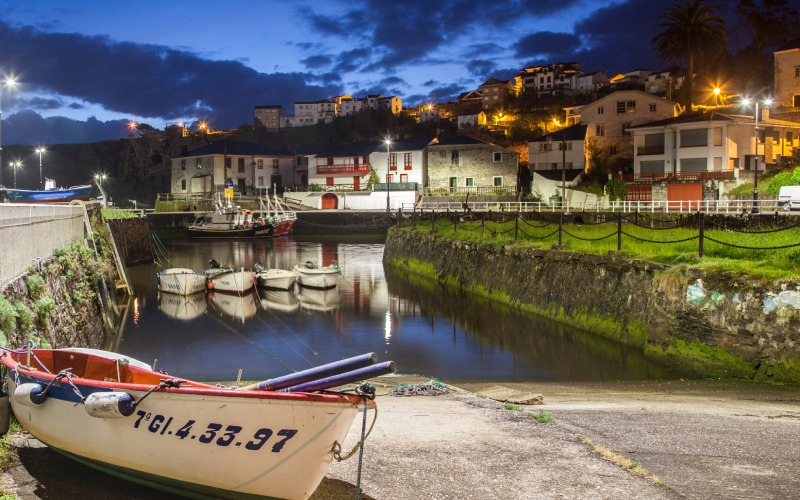 Night view of the pier of Puerto de Vega, with boats. | Shutterstock

The sea air is entangled in the steps, in the conversations and even in the thoughts of everyone who arrives at Puerto de Vega. An air in which past, present and future of this fishing village mix with the gusts of Celtic wind blowing nearby. While, in the background, you can feel the constant singing of a river, the Navia, serving as a refrain to an ever-present sea.

The fishing origin of this small port goes back to the old whalers that docked and departed from its dock. Two 30-ton whale jaws on display at the Mirador de la Riba, flanking the first whaling contract, remind us of this past. In the same space, a little further up, there is also an old whaling cannon with its cargo. But the life of Puerto de Vega does not begin and end with this fleet that dropped anchor for the last time around the 17th century. 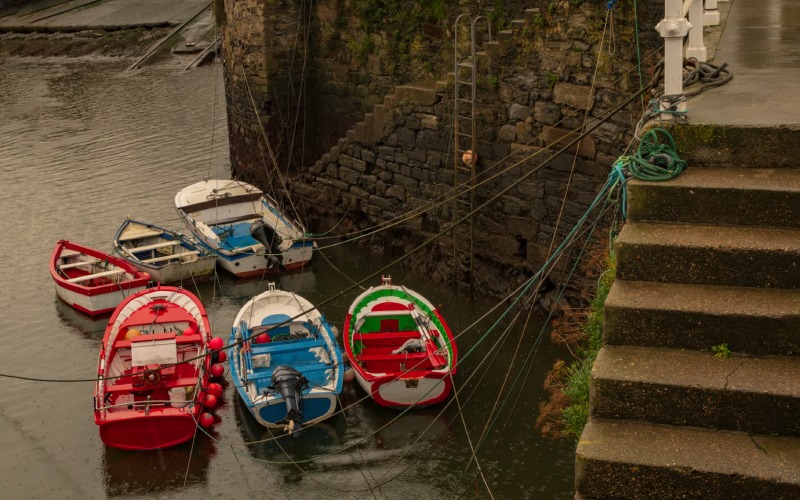 Boats next to dock stairs in Puerto de Vega. | Shutterstock

The seasons continued to follow one after the other, always facing the horizon, with the sea providing a quiet life, tinged with blue. During the following years in Puerto de Vega, as in many other places along the Asturian coast, a thriving canning industry developed. One of its old buildings, La Arenesca, where the Juan Pérez Villamil Ethnographic Museum is currently located, can still be visited today.

Oceanic tones are present here and there, everywhere. In the rula or fish market, an old building from 1928 that can be accessed and where the sale of fish continues. Or in the Monument to the Women of the Sea or in the fishermen’s houses. In every cobblestone of the promenade that surrounds the dock. 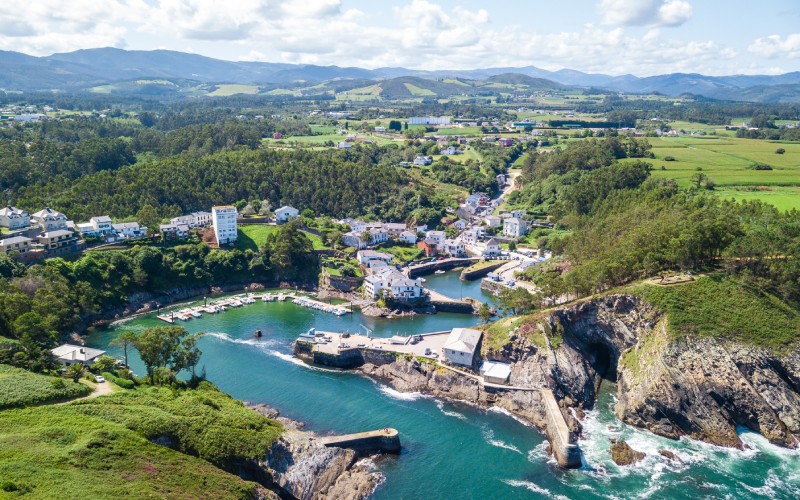 The landscape of Puerto de Vega sticks to the skin, like water droplets do. A panorama full of absolute adjectives. Impressive, alive. A view that can be appreciated in all its splendor next to the 18th century cannons of the Mirador del Baluarte. Leaving it behind, the emblazoned houses, the old Indian quintas and their gardens, invite you to dream of a golden age. In the vicinity of the port, an imposing 18th century mansion, Las Tuerbas, owned by the Lebrón family, watches over the comings and goings of passers-by. Along the route it is possible to follow the trail to the last days of Jovellanos in the Casona Trelles, or to trace the origins of Juan Pérez Villamil. As well as the beginnings of Álvaro de Navia Osorio, lord of the House of Trelles and the Tower of Vigil, III Viscount of the Port.

The Middle Ages surprises in the square known as Cupid’s Square, formerly squared by three manor houses, that of Cachán and the House of Columns. And another, now disappeared, the father of Nobel Prize Severo Ochoa. The whole transpires the transformation of the town since its beginnings as a fishing village. 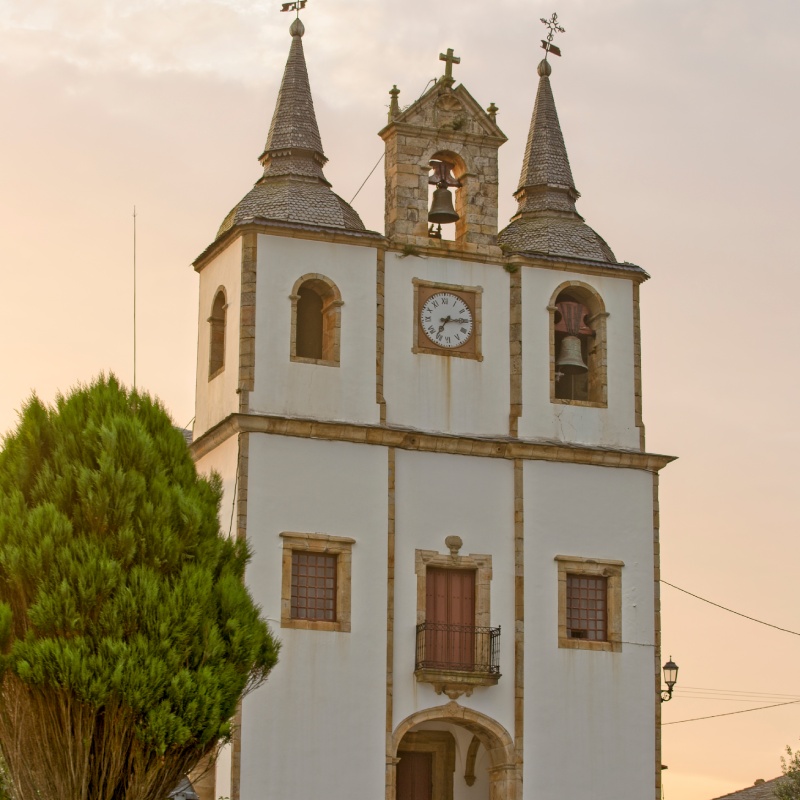 The tour goes on, there is still much to discover. Do not miss the opportunity to approach the casino building or take a walk through the Benigno Blanco Park. Or go up to the Barrio Alto to visit the Church of Santa Marina. And once there, go inside to take a closer look at the baroque altarpieces by the sculptor Bernardo de Meana. In addition to the pulpit, brought from the old church, the chalice, a gift from Pérez Villamil, or the carving of San Blas. A plaque testifies that Jovellanos rested in this place for three years. It can also be a good place to take a break on the way. Maybe waiting for the movement of the hands of your watch to mark the time to get to know your surroundings.

Nestled in the Council of Navia and its 12 kilometers of coastline, Puerto de Vega is a perfect excuse to get to know other parts of its geography. Spaces of wild beauty, such as Frejulfe Beach, 750 meters long, declared a natural monument. It can be reached from Puerto de Vega or from the road to Andés. From the latter you can also access Coedo Beach, an old watchtower and whaling cove. Nearby, there is also the sandy beach of Fabal and then the Moro beach. 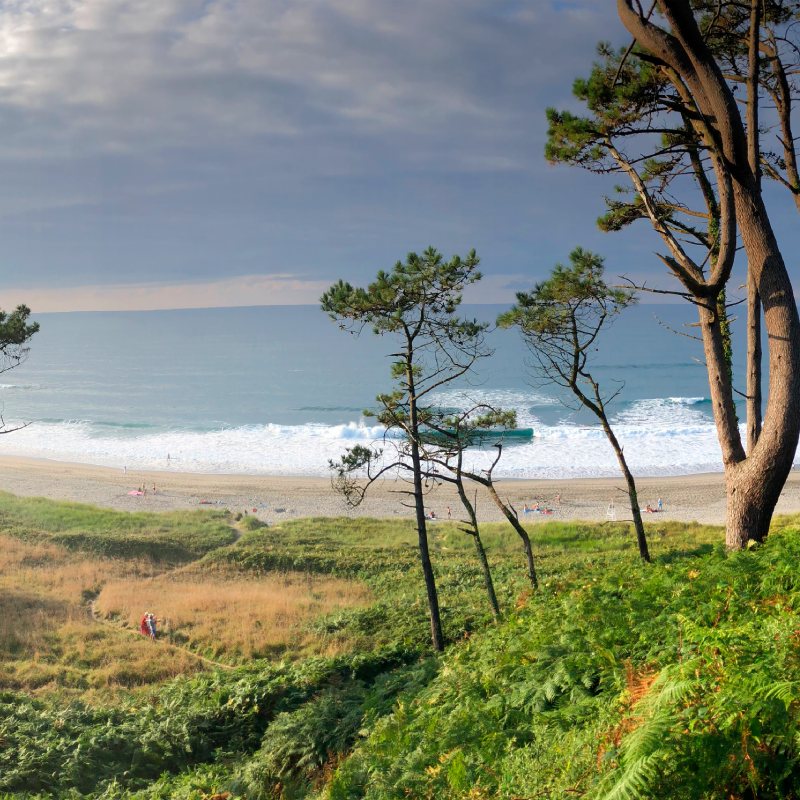 In its long journey, from its source in Piedrafita do Cebreiro, the Navia river finds its natural ford point in the village to which it gives its name. A village of promenades by the sea and remains of ancient walls that coexist with the naval tradition of its shipyard. Also, here is the passage to the interior of the Historical Park of Navia. Formerly, an obligatory stop for pilgrims on their way to Santiago de Compostela, the course of the river orchestrates the surrounding nature. The up and down slopes that lead to waterfalls, the Arbón or the Doiras, recreational areas and rest areas allow you to take a moment to enjoy a snack or soak up the scenery. The natural wealth of the environment is impressive. In fact, part of it belongs to the Natural Park of the Fuentes de Narcea and Ibias.

Every village is a surprise. Castropol, no more than 25 kilometers from Navia, is the natural border between Galicia and Asturias. Besides being a promontory with a beautiful panoramic view over the Eo estuary. Also next to the Galician limits of the province of Lugo is Grandas de Salime, Asturian landmark of the primitive Way to Santiago, is an enclave with archaeological remains that are hidden among nature. 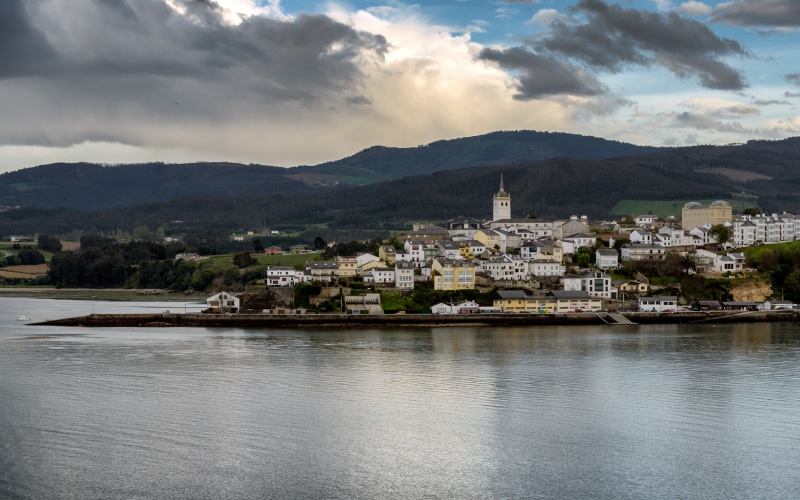 Concluding again in the same sea that bathes Puerto de Vega, you can visit the lighthouse of Tapia de Casariego. A seaside town where surfing has come to stay and can be enjoyed in its beautiful beaches of Serantes, Mexota or Santa Gadea. With all the time in the world, the stops along the way could be infinite, with the heart divided between the sea and the mountains, but always looking at the sky.

The end of the journey arrives through Puerto de Vega and when the Council of Navia approaches. There have been many surprises. But, before leaving the village, one last look. A few last steps near the dock breathing sea and peace. To approach, perhaps, to one of the bars, restaurants or cider houses to taste the local fish or seafood, while planning a next time in the west of Asturias.

ASTURIAS, beaches, fishing villages, most beautiful villages, ports
It may interest you...