The final resting place of Alfonso III the Great

Hidden in an unexpected corner of the concejo of Villaviciosa, in Puelles, is the spiritual and monumental place where one of the most powerful kings of Asturias spent the last years of his life. Centuries later, a Cistercian monastery would be founded there.

Plan your visit to Valdediós

This small complex is made up solely of San Salvador Church and Santa María de Valdediós Church, so the visit can easily be done in half a day, which is more than enough time to visit both churches in detail. Luckily for visitors, it is possible to continue the visit in other equally impressive places in Asturias, such as the towns of Villaviciosa and Lastres or the nearby cities of Gijón and Oviedo (just 40 kilometers away), which take a little more time to visit.

On September 16, 893, in the beautiful place known as Boiges (current-day Puelles), next to the small Asta River, a new church was erected in honor of San Salvador. To understand the importance of the moment, it should be noted that no less than seven bishops participated in the concelebration.

In that isolated place sheltered by a beautiful forest but easily accessible by sea—the Villaviciosa Estuary was navigable at the time—Alfonso III the Great would spent his forced retirement after being deposed in 909 by his three sons, García, Ordoño, and Fruela. Therefore, the church was accompanied by a palace about which practically nothing is known today.

In the year 1200, King Alfonso IX and his wife Berenguela acquired the property, and on November 27 in Santiago de Compostela, the charter for a monastic community was signed and the monastery came to be called Valdediós (Valle de Dios, meaning “Valley of God”). The White Monks, who always settled in secluded places, customarily evoked divinity directly, even with the names of the settlements they founded.

The first monks to populate the place came from the Galician locality of Sobrado, and starting in the 13th century they accumulated royal privileges and possessions. To build the great medieval monastery, they had to alter the course of the river and finished construction in 1225.

As with all buildings of its age, the monastery has suffered many hardships. The worst fires occurred in the 13th, 14th, and 16th centuries. In 1522, after coming under direct control of the Cistercian Congregation of Valladolid, there was a flood that left only the church standing, requiring serious reconstruction. The renovations were interrupted in 1590 by the arrival of a plague that depopulated the monastery, leaving one monk and the abbot as the only survivors. On August 14, 1691, the church was flooded by waters three meters high due to a second devastating rise in the level of the river.

In 1810, Valdediós was plundered by Napoleonic troops, and in 1835, it was secularized due to the ecclesiastical confiscations of Mendizábal. In 1843, an individual acquired the property for 891,300 reales and it was converted into a seminary and school.

During the war of 1936, psychiatric patients from the evacuated Oviedo Hospital were able to stay in the monastery until October 27, 1937, when Carlist troops arrived and killed 17 members of the staff, 11 of which were women. The reason behind the massacre remains unknown.

In 1986, a comprehensive restoration plan was undertaken and it regained its monastic function until 2009, when the Cistercian community was dissolved and the Community of St. John came in, but abandoned the monastery in 2012 due to their inability to assume the costs.

Valdediós currently functions as a hostel.

What to see in Valdediós

The Valdediós monastic complex, located less than 40 kilometers from Oviedo, is one of the most relevant medieval sites in Asturias. Begin the visit at San Salvador Church (est. 893), a masterpiece of the final period of pre-Romanesque art. The church is completely vaulted and has three naves.

In addition to its monumentality and the height of its central nave with an impressive vault, it is distinguished by its western (main) façade and original portico, which is connected to the south side and known for its beautiful lattices that demonstrate, alongside other details of the décor, the influence of the Caliphate of Córdoba on Asturian artwork. The interior of the church conserves remains of paintings from the time of its construction. 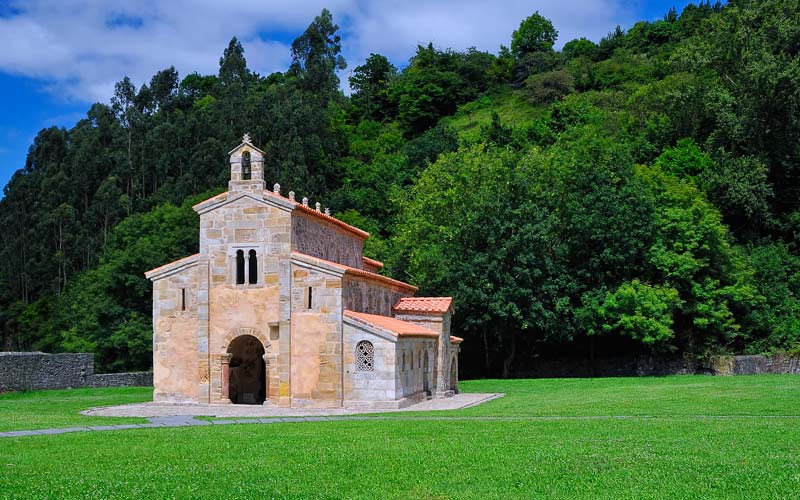 Next, you can tour Santa María Church, a good example of Romanesque art informed by the characteristics of a Cistercian abbey, although it also contains elements of a Benedictine monastery such as the three semicircular apses. The Church, divided into three naves, stands out for its use of pointed arches and above all for its transept, whose exterior is very striking.

On the other hand, this great church, covered by Gothic vaults supported by thick pillars, stands out for the quality of its construction in which the foreign master Gualterio took part, as stated by the inscription conserved from 1218. On the northern face there is the Romanesque “Door of the Dead” through which the cadavers of deceased monks would be carried to be buried in the cemetery. Inside the church, although the Romanesque construction is conserved, the altarpieces, imagery, and the spectacular organ are Baroque.

The medieval cloister was replaced by another one of three floors built between the 16th and 18th centuries, although the original façade is conserved in the westernmost branch that connected to the rooms of the community, which were also replaced after the devastating 16th-century flood. The beautiful complex is completed by the hostel and abbey house, rebuilt in the Modern Age.