This fishing village in the council of Villaviciosa is situated in a small cleft in the steep coastal terrain. Today it is the centre of gastronomic tourism in the council.

What to see in Tazones can be covered in half a day. If the visitor allows himself to be seduced by the goodness of its gastronomy and Asturian cider, this can be extended. Likewise, its lighthouse is a must see. In the surroundings, Villaviciosa, its protected area or Lastres are great alternatives. If you prefer the urban area there are two main options, Gijón and Oviedo.

Finally, in the sections sleeping and eating in Tazones you have a selection of local hotels and restaurants.

During the summer of 1517, a fleet of forty ships carrying the young Charles I encountered a storm in the Bay of Biscay. To avoid any risk, the ships modified the initial route to the port of Santander. However, they arrived unexpectedly at the small port of Tazones.

The decision had to be for a major reason, since at that time Asturias was considered an “abandoned and uninhabitable country”. There is no record of whether the monarch stayed in Tazones or Villaviciosa. This lack of detail has led to several buildings in the area competing for this honour.

Making a living out of the sea

The small nucleus had in the hunt of the whale its main sustenance in the past. Nowadays, the attractions are focused on the gastronomy generated by its sea products. The few boats that still go out daily provide the best fish that can be found in this area of the Cantabrian Sea.

On the other hand, the relationship with Villaviciosa feeds the town with seafood such as spider crab, lobster, bugre (lobster), andaricas (crabs) barnacles and lampares (limpets). It also has traditional products from the interior such as cider, fabes or cheese. In fact, Villaviciosa is one of the councils included in the Cider Shire designation.

What to see in Tazones

The physiognomy of this curious enclave seems to have trapped its inhabitants between two large blocks of land and sea. This makes the ensemble you see at Tazones impressive. The place boasts picturesque houses, arranged in a staggered manner and with decorated balconies. Its characteristic feature is the appearance of hórreos almost on the coast line. It also has a great atmosphere and holds the title of Historic-Artistic Site.

From the shelter of its port, you can see Rodiles beach and the beginning of the Ría de Villaviciosa in the distance. It is one of the most beautiful parts to see in Tazones. 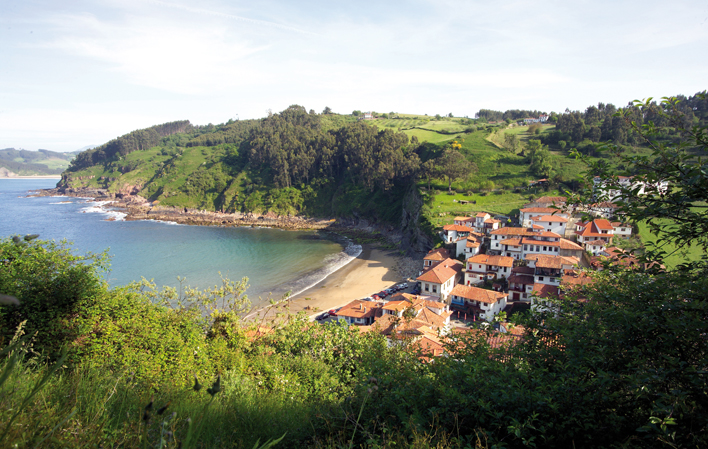 The landing of Charles I is staged every San Roquín (August 17th). The whole village is involved in the performance wearing traditional costumes. They also accompany the entourage of boats and ships. These festivities are completed by taking the saint and the Virgen del Carmen out in a sea procession.

Another interesting thing to see in Tazones is the Casa de las Conchas (House of Shells). It is located in the quarter of San Miguel. Its façade is completely covered with bivalve shells of different shapes, sizes and colours.

Finally, the town is part of the Asturian Jurassic Coast. In the perimeter of the coastal line of Villaviciosa it is possible to find fossil remains of dinosaur footprints. Likewise, the area around the Tazones Lighthouse (1864), partly plastered in white, is one of its most important sites. Fossil remains have also been found on the cliff at the western end, a few metres from the harbour breakwater.

Before entering the village, compulsory for non-residents and free of charge.

The main festivity to see in Tazones is that of San Roque (mid August).

Another special occasion to see in Tazones is the Charles V landing party (August 17th).

ASTURIAS, beaches, fishing villages, natural environment
It may interest you...

Many of the most curious hermitages in Spain are great...
>> More information

Although summer and winter are the holiday periods par excellence,…

Cuna de conquistadores A stronghold disputed for centuries by Moors,…

Autumn Getaways in Spain that You Cannot Miss
Although summer and winter are the holiday periods par excellence, the third season of the Más información

5 abandoned villages in Spain
[vc_row][vc_column][vc_column_text]Spain is known for its big cities; the big cities with tourist, commercial and financial Más información

The most beautiful river sources in Spain
[vc_row][vc_column][vc_column_text]If you do not live near the beach or have a swimming pool, the river Más información

The most beautiful villages of the Maestrazgo, the impressive region between Castellón and Teruel
The Maestrazgo is a historical region shared between the provinces of Teruel and Castellón. It Más información