More than 100 years ago, in the Asturian council of Llanera, there was a colony built around the Santa Barbara explosives company. Today the façade maintains its original appearance and its internal structures, its skeleton, survive. However, inside the church there are no parishioners or priests. The pews have been replaced by a skate park and its old walls are now splashed with the brushstrokes of the artist Okuda San Miguel. The Santa Barbara church no longer exists. In its place stands the Kaos Temple, a beautiful example of how the classic and the contemporary live together.

From church to skate park

Before being called Kaos Temple, this building housed, as already mentioned, the workers of an explosives factory. But after the Spanish Civil War, the company closed. With no work available, the families who still lived in the old colony emigrated to other cities and the enclave was left uninhabited.

In the 1960s, a private company acquired the land of the old colony with the intention of using it as an industrial estate and the area became known as the Asipo industrial estate. It was then that all the buildings were demolished except for one: the church of Santa Barbara, which in practice was abandoned. It remained abandoned until 2007, when a young commercial agent, Ernesto Fernández Rey, bought the building with the intention of building a multiservice company. But the project of Jernest, as this man, who died in 2016, was popularly known, did not go ahead, so he decided to use the place as the place to practice his hobby: skateboarding.

Thus, the Church Brigade collective, to which Jernest belonged, went on to take on the remodeling of the church. When the project was already progressing, the artist Óscar San Miguel Erice, better known as Okuda, entered the scene.

‘It’s really the only project, next to the Santander school, that has come from me and not from a proposal,’ says the painter. ‘I fell in love with the place because I saw on the internet a church that had a perfect symmetry between the dome of the altar and the ramps below,’ he adds. After seeing the images, Okuda contacted the organization, which gave him a free hand to do whatever he wanted on the immaculate walls of the building. 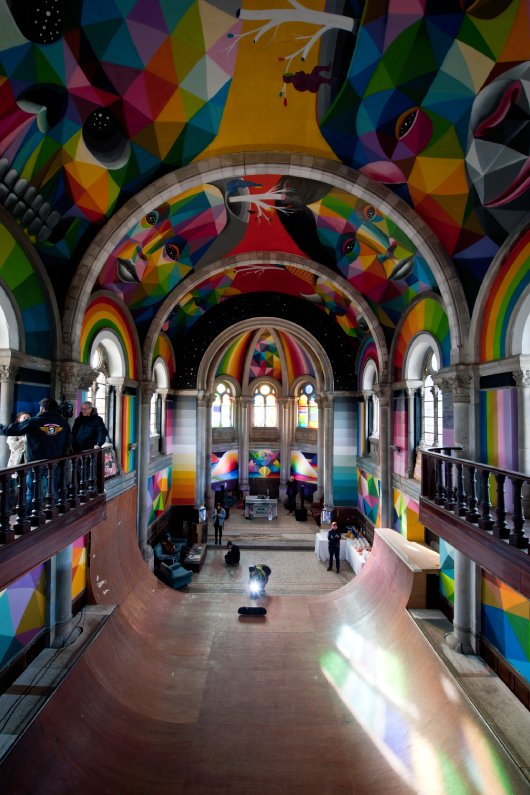 In order to finance the project, Okuda launched a crowdfunding campaign that, according to the artist, ‘was a marvel’. Thus, with the help of different patrons, including some brands, San Miguel raised the money to continue with the dream of Kaos Temple. ‘Then they have raised more money to complete it all. The whole floor is a skate park and that’s what made it even more wonderful,’ Okuda adds.

Kaos Temple was the first church in which the author has intervened, although more followed. One in Morocco, known as Youssoufia’s church, and another in Denver, Colorado. ‘This was a turning point in my career,’ says Okuda, who has seen his popularity increase since that initiative: ‘The truth is that it has gone around the world and I had many proposals before, but after this it has been crazy’.

The Kaos Temple roof, a sky built in seven days 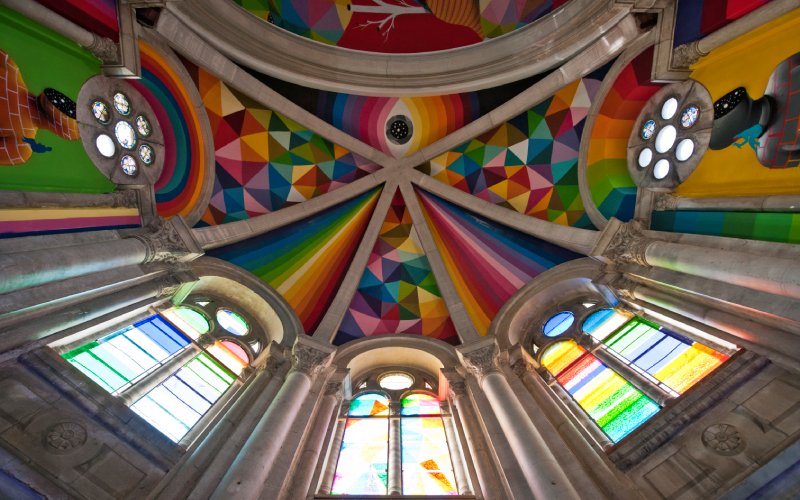 Although the artist claims to take an average of four or five days on most of his projects, in the case of the Kaos Temple the task took him longer. Specifically, seven days, ironically as long as it took God to create the world. Although Okuda and his assistants, Mister Piro, Antonyo Marest and Pablo Hatt, did not use the seventh day to rest, but to work. ‘It’s kind of a religious number and it’s quite funny to me,’ San Miguel points out.

The delay in this mural was due to the ceilings, a space that Okuda is not so used to painting, since he is more dedicated to open spaces or studio work: ‘It got a little more complex because of this, because in the end it is not the same on a wall as on a ceiling’. However, the artist managed to adapt to the space and was delighted with the result: ‘It was a brutal visual impact’. 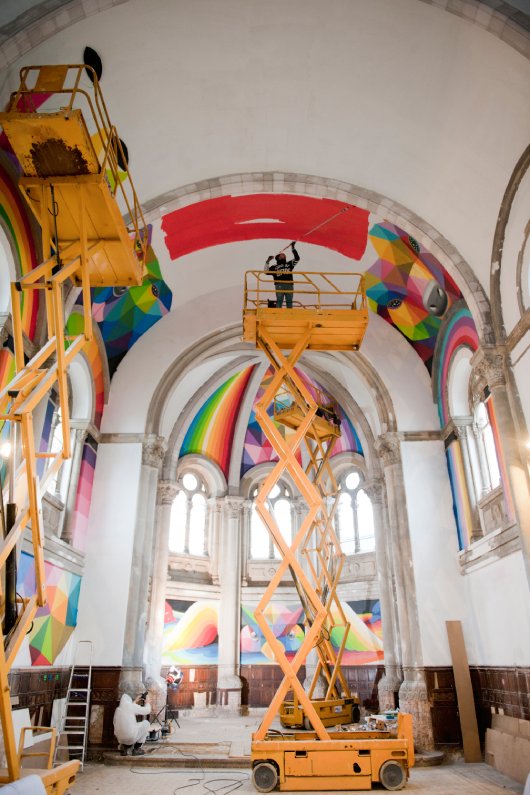 And the result is what follows: a church of neo-Romanesque plan with neo-Gothic details colored by the particular style of Okuda. All of it, a continent that embraces a skate park, which was inaugurated in 2015 and opened not only to the Church Brigade collective, but to the general public, who made Kaos Temple a skate mecca [although it is currently closed until further notice]. Thus, vaulted walls and ceilings from the early 20th century are complemented by geometric figures and vibrant colors, the artist’s classic style. ‘There I learned that contemporary art looks amazing with classical architecture,’ says San Miguel.

Likewise, the naming and arrangement of the murals have their own raison d’être. ‘One of my icons is a kind of asymmetrical compass rose,’ says the author. This sign is a circle that marks the directions in which the horizon is divided. Okuda indicates that the idea symbolized by both the design of the church and its name is just that: ‘That if you want to do something you can do it, especially to make your personal path‘. 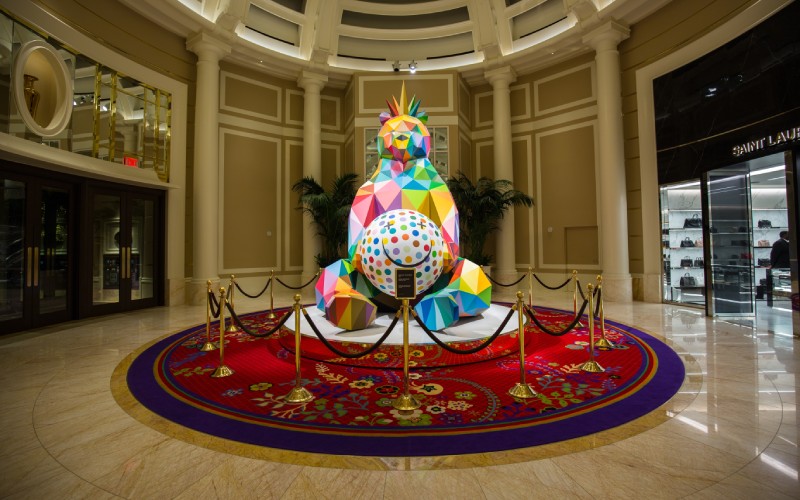 It’s been seven years since Okuda completed Kaos Temple. Since then, the artist’s works have continued to spread around the world. From the Valencia City Hall falla that burned during the 2018 festivities to the aforementioned temples in Morocco and Colorado, as well as other projects in China, Cuba or Peru. But, for Okuda, the Kaos Temple was very special ‘because it was one of the first powerful ones’. And because, among other things, his family was able to visit it. ‘What I enjoyed the most was being close to my parents’ house’, says the Cantabrian.

ASTURIAS, churches, contemporary, spanish culture
It may interest you...