Small valleys go up and down the western Asturian coast. The stretch between Soto de Luiña and Cadavedo is full of these features. Almost jungle-like the leave postcards worthy of a dream. In these surroundings awaits, quietly, an extraordinary beach, which makes isolation its best asset. This is the beach of El Silencio or Gavieiru, in the village of Castañeras, the calmest weekend getaway.

A bit of history of the beach of El Silencio

The Cantabrian Sea is the main responsible for the creation of the beach of El Silencio. However, zooming out and looking around, the streams appear as a complementary creative force. Both are what give the west coast protected landscape its special shapes, where cliffs and mountains almost merge.

The constant pounding of the ocean has been pushing back this corner of the Asturian coast over the millennia. As a result, a sort of natural amphitheater with walls that are almost 100 metres high was created. The quartzite and slate have formed an almost perfect shell between two high peaks. A water-covered plain precedes the beach, which is not a sandy area, but a xogarral. It is pebbles that litter the ground. A sign of the authenticity of the place. 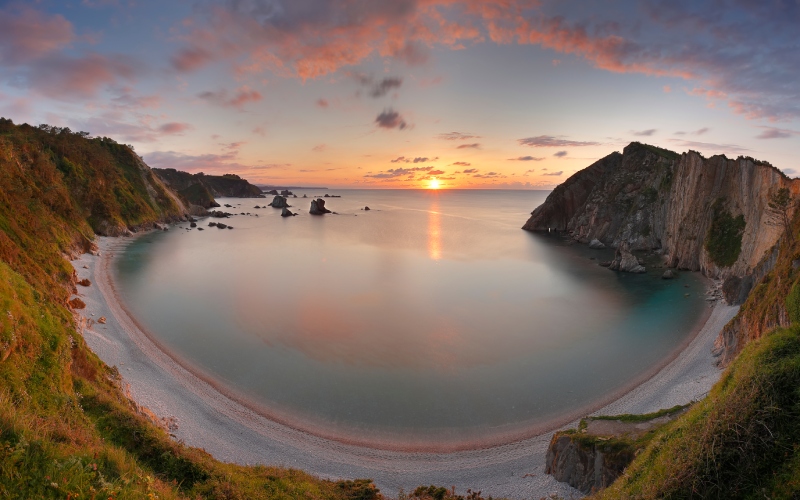 It has an almost perfect shell shape. | Shutterstock

Difficulty of access and remoteness from large urban centers such as Avilés or Gijón have safeguarded this weekend getaway. Thanks to this, its forms remain natural. Whether its lateral arches, the islands of great verticality in some cases or even areas of detachment, all are kept original. A combination of factors that have made that people name it the beach of El Silencio. This is true except in high season, when it becomes overcrowded. Because its tourist discovery, for the moment, is the last point in its history.

The keys of El Silencio beach

Being remote is one of the most important characteristics of El Silencio. Thanks to this, it has remained almost untouched. The difficult access meant that only those with an adventurous spirit could enjoy its calm. In recent times, however, a stairway has been installed to make the task more affordable, as well as car parks to leave the car before taking on the descent. There are no services at the bottom. It is now open to the general public, although if you are in poor shape it will be a little difficult. But it is definitely well worth it. 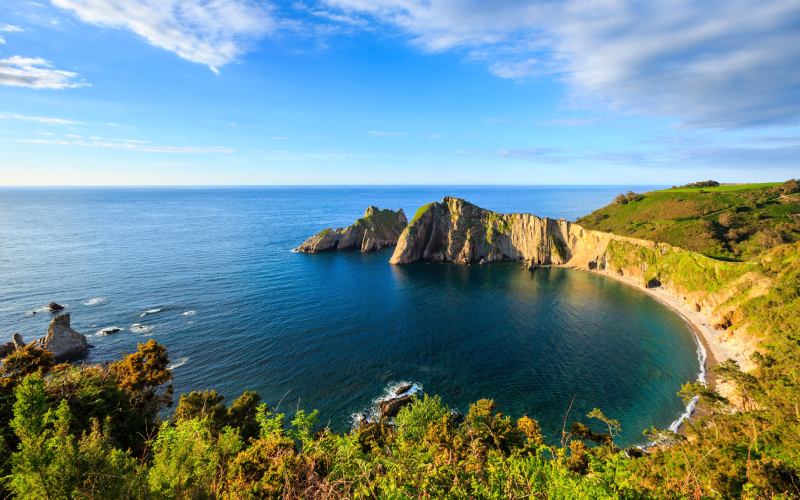 The erosion of the Bay of Biscay has caused that in front of the cliff there is a sort of a small level scoop. Thus, the water does not cover too much and the deep blue colour that is usual in this sea becomes a little lighter. This is the reason why scuba diving is famous here. Geology enthusiasts have a lot to see, both in the marine area and on the cliff itself.

As on any unsupervised beach, caution must prevail. Sometimes the sea becomes braver, despite the fact that the place is quite sheltered. For this reason, if you want to enjoy the cold waters, you must be very careful. As a curiosity, it is worth mentioning that in the past this getaway was frequented by nudists. They did not have bad taste, as the surroundings are enchanting. 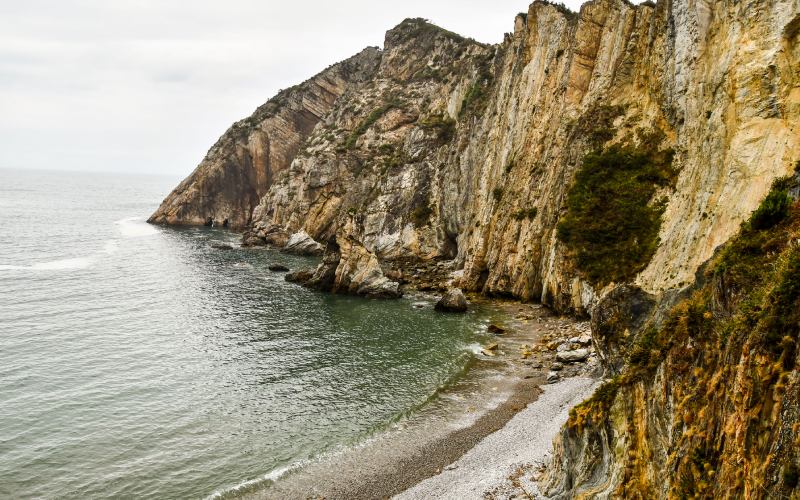 The geology is a strong point of this beach. | Shutterstock

Spots near this beach

The closest is the beach of Ribera del Molín. Located almost next to the western end of the Silencio beach, a possible access is, only at low tide, through the coastal rocks. Very similar to its partner, the main difference is that it is much less monumental and has a small waterfall. In this case, river action is present. Meanwhile, above and between the two is a great viewpoint. 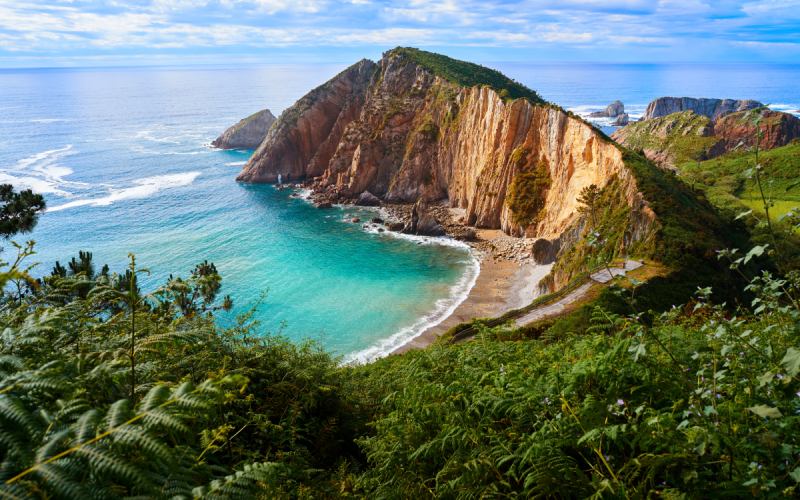 The beach of El Silencio. | Shutterstock

East or west, the tone is the same. A hill, a small village, another hill and another village. Thus, starting from the eastern end, Valdredo, Albuerne, Novellana, Castañeras, Santa Marina, Ballota, Tablizo, Ribón and finally Cadavedo. Next to the first, Soto de Luiña is a very peaceful option for an overnight stay.

For its part, Cadavedo has exceptional landscapes. La Regalina combines amazing cultural and natural elements. Its colourful hermitage and raised granaries stand on a point of cliffs that allow you to see almost all of the ballotas. Below, a beach perfectly conditioned for hanging out. It is worth mentioning that there are paths that lead up and down the narrow valleys. A perfect way to enjoy the splendid flora. The Northern Way to Santiago makes the most of this. Finally, it is worth mentioning the proximity of beautiful Cudillero and its quinta, just 15 kilometres away. 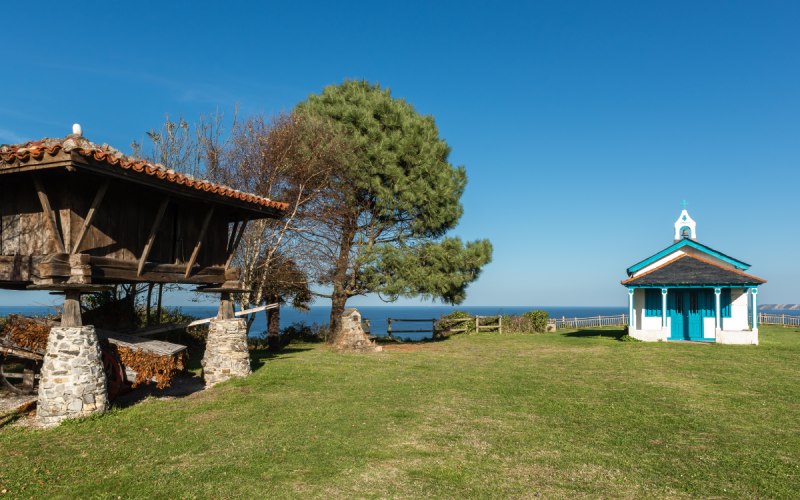 La Regalina or La Riégala next to the main granary. | Shutterstock

A beach in parallel to the world, that’s why it’s our weekend getaway.
Almost languid but wild, the beach of El Silencio is a reference in the West of Asturias. Well connected by the A-8, it is easy to reach whether you come from Luarca, Gijón or Oviedo. The local gastronomy is outstanding for the fish and seafood from the Cantabrian Sea. Also the fruits of the land, be they cattle or pigs. Exceptional complements for a unique weekend getaway that makes isolation its best asset.