In the Benasque Valley, silence is felt in a special way. It is a silence that shouts, sings, tells stories… It is the magical language, of legends, of the gods’ spirits who inhabited glaciers and floated among peaks capable of scratching the sky. A silence that says it all, without the need to pronounce a single word. Here, it is more than enough to just see and listen.

At any point in the valley, one’s gaze runs the risk of remaining magnetised, glued to a landscape that mixes earth and sky. From a carpet of flowers to the flight of a vulture or the rushing of clouds. Wherever you are in the valley, your ears run the risk of getting lost until you find yourself, listening to the song of nature. The howling of the wind in the ravines, the tinkling of the stars around the peaks, the melodies of the raging waters of waterfalls.

In the heart of the Ribagorza region stands one of the highest points of this mausoleum, a tribute to the love between a god and a princess. Here, the magic of the Pyrenees extends, in the heart of the province of Huesca, through an impressive natural park. Through Navarre and Catalonia, the Aragonese Pyrenees open its heart.

The nature of the Benasque Valley

Travelling through the nature of the Benasque Valley means attending a lesson that must be approached with eyes wide open. The valley has a robust, mountainous spine that descends and ascends to impossible heights. From the Perdiguero Massif to the almost 3,500-metre-high Pico Aneto, the valley is full of ups and downs.

Among the rocky twists and turns and geological curves, you can breathe in the high mountain climate that has preserved a series of glaciers for 45,000 years. Natural Monuments since 1990, these white giants, located in the Perdiguero, Maladeta and Posets Massifs, are unique witnesses of the last glaciation. A melody of ice and fire, sometimes coloured by desert dust, sometimes by moonlight. 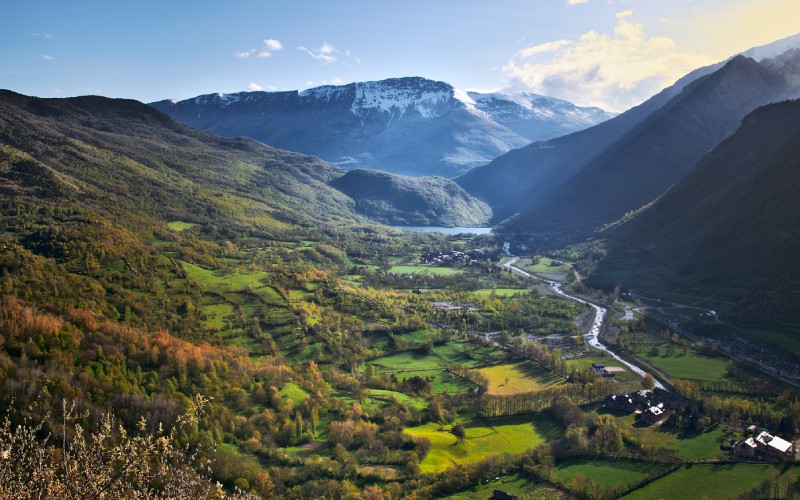 Sunset over the Benasque Valley. | Shutterstock

The notes of its music are drawn in limestone formations, ibones, ridges and karstic staves, where the waters of the Aneto thaw hide and appear. The Forau de Aigualluts chasm is a magical spectacle that lasts up to 4 kilometres. Concluding, in a surprising abracadabra, reappearing in the waters of the Garonne, in the nearby Aran Valley.

The anatomy lesson continues, following the circulation of water, from the headwaters of the river Ésera, through the arteries of the Posets-Maladeta Natural Park. Its veins and tributaries irrigate the bottom of the Vallibierna Valley, forming a lake, like so many others scattered throughout the park. Fed by rain and thaws, the Barbarisa, the Sen or the Cregüeña remain immovable surrounded by wild pines, firs and junipers.

Between the cliffs, golden eagles, teprarriscos and alpine sparrows watch the paths. Pyrenean lizards hide in the ground and, in the peat bogs, their cousins, otters and newts. Meanwhile, in the forest, foxes, squirrels, wild boar and little owls live forgetting the noise of the world. 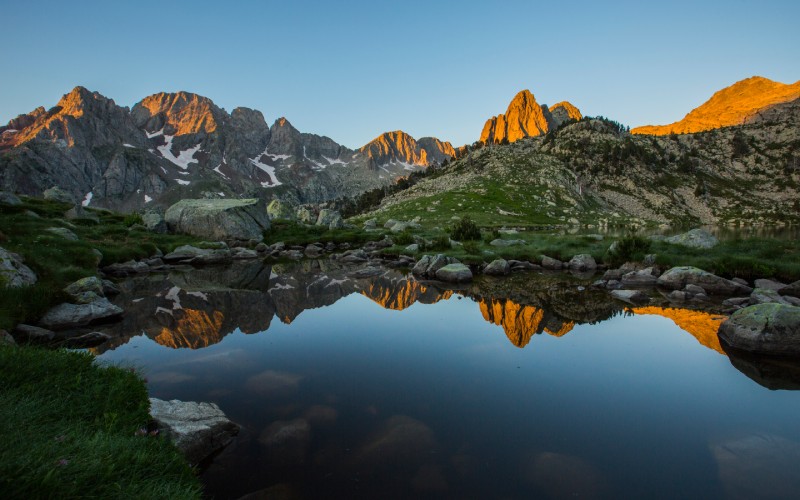 From the entrance to the valley, in the Congosto de Ventamillo, to the perpetual snow and the alpine ski slopes of Cerler. From the massifs of Madaleta or Perdiguero, to the side valleys of Aigüeta La Vall or Cregueña. Everything here is peace and silence.

The villages of the valley

The villages of the Benasque Valley camouflage with their surroundings. Pyrenean constructions with shiny slate roofs, cobbled streets that lead possibly towards a small Romanesque church. A picture that seems to come to life before the eyes of those who visit them.

All these small villages have a story to tell, corners to discover or bridges to cross. More than words, these lines are indications to sketch an imaginary map to get to know what a small itinerary through the area has to offer. 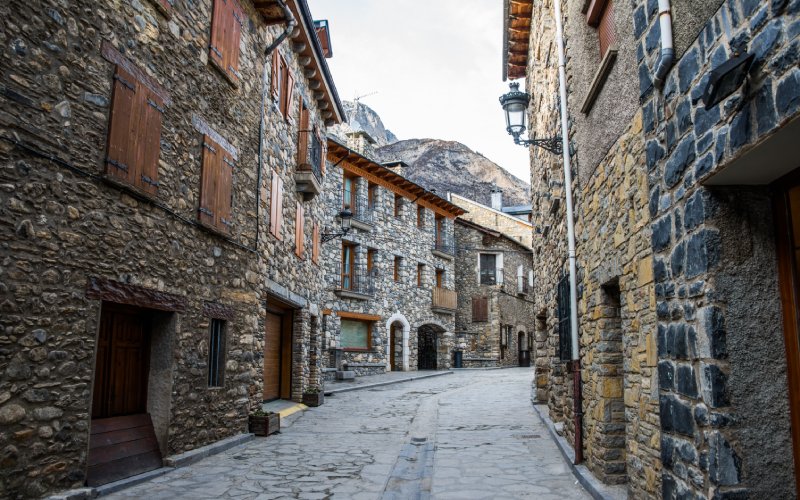 Benasque is a starting point under a mountainous terrain, coloured white in winter and bright green in summer. The geography of this municipality, capital of the region, is divided between past and present. Next to the church, the old houses, the Palace of the Counts of Ribagorza or the Juste House, with its visible tower, still survive. On the Anciles side, the traditional architecture is reflected in a group of ancestral homes from the 16th and 17th centuries, named after their inhabitants. Casa Escue, Casa Suprián and Casa Sort are just some of these centuries-old wonders, but a visit to Anciles does not finish here. Getting there invites you to approach a small hermitage, of Lombard origin, which can almost be imagined to be guarded by a dragon.

Nearby, in Cerler, an incredible viewpoint anticipates what awaits. On one side, meadows and wooded areas, on the other, challenging nature. In its historic centre, the houses embrace the church and the air embraces the silence. A little further on, a point and a gap emerges out of nowhere between the village and the ski resort, like two universes that converge. 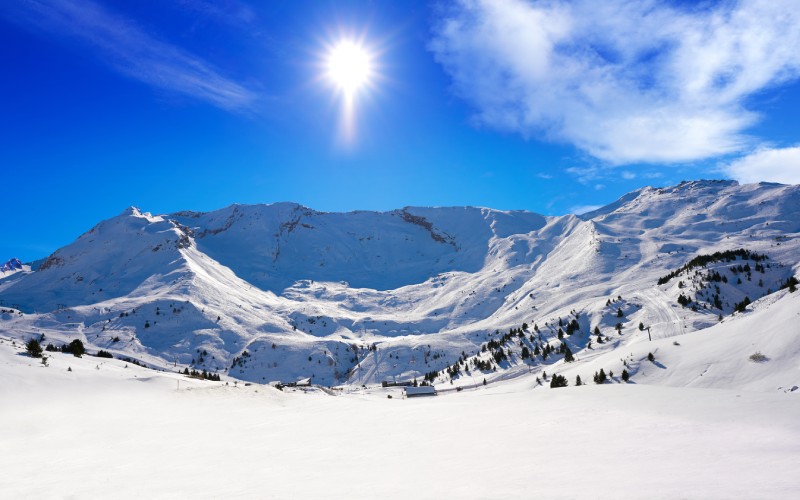 Snow on the ski slopes of Cerler. | Shutterstock

From the centre of the valley, Sahún requires a stop to contemplate the Parish Church of San Juan Bautista. Another temple, the Sanctuary of Guayente, preserves within its walls the echo of discussions about pastures, witchcraft or bandits. Peace, in the face of so many disputes, can be found in the middle of nature, next to the Eriste reservoir, the entrance to the valley of the same name.

Sheltered under the mountain range of the same name, Chía, which has been standing since before the 10th century, is home to some real treasures. At that time, according to legend, a shepherd found the virgin that is now kept in the hermitage of la Virgen de la Encontrada. It is interesting to note the churches, San Martín and San Vicente, caused by the confrontation between the feudal lords and the monastery of San Victorián. The Mirador de la Serreta makes a beautiful farewell photograph, but only for a farewell, never a goodbye.

There are still steps to take. There is still Castejón de Sos and its small villages, Ramastué or Liri. And the Congosto del Ventamillo and the Forest of Es Felegás. There are still meters to climb, skies to cross, secrets waiting.

The Benasque Valley is a paradox of histories and geographies. A unique way of coexistence between past legends and a present open to the possibility of adventure. From the very creation of the valley, as a tribute of love from Hercules to his dead princess, Pyrene, the legend is hidden in the mountains.

In the place where the highest peak in the Pyrenees reigns supreme, adventure appears every step of the way. Ascents to glaciers, Montes Malditos and passes with a prophet’s name lead up to an altitude of 3,500 meters. From there, looking out over the valley makes you feel small in the face of a landscape that explodes on all sides.

Along the river Ésera, you can choose to do all kinds of water sports: rafting, kayaking or canoeing. Staying on land allows you to talk face to face with the road on hiking trails. Meanwhile, the clouds await, reflected in the snow on the slopes of Cerler or Llanos del Hospital. But there is also space for peace and quiet next to a riverbank or under the leafy trees, in parks and picnic areas. 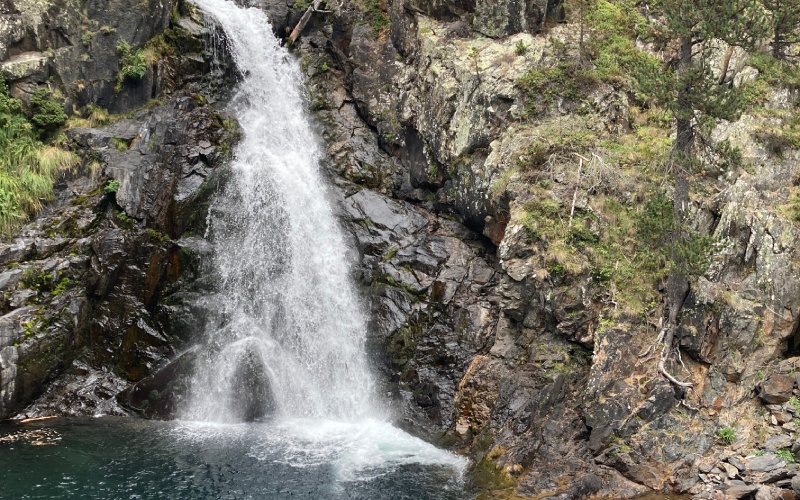 As the sun goes down, the light and the volume of the voices descend to tell, almost like a secret, the story of the Aneto. The legend tells how the snow, after the fire that killed Pyrene, dyed everything white. After the thaw, a blanket of green grass covered the mountains, and people came to the mountains to plant small villages. Fearsome giants also came, enchanted by the beauty of the place, among whom was Netu, known for his greed.

After a while a beggar appeared in those magical lands. After working and living with the people of the village, he continued his journey into the valley. There, without food or water, he asked for help from Netu, who refused. The last thing the giant heard was: ‘Your heart is as hard as a rock, may you all turn to stone’. On that day, the Aneto was born, the petrified giant that still looks down on what was once his domain. Cradle of stories and legends, dreams of adventure and peace that slumber in the Benasque Valley waiting to come true.