The neighborhood of Santa Cruz extends over four square kilometers and is the largest old town in Spain and one of the largest in Europe, along with Venice and Genoa.

One of Zorrilla’s characters speaks of Seville in his famous play Don Juan Tenorio, inspired by the Andalusian capital. More than 170 years after the book was published, the streets and monuments through which the characters of that play passed still hold the veneration of those who walk through them today.

The avenues of Santa Cruz are lined with Roman, Muslim, Catholic and Jewish vestiges, and its walls were once home to the second largest Jewish quarter in Spain, after Toledo. History is at ease among orange trees, narrow streets and majestic monuments. 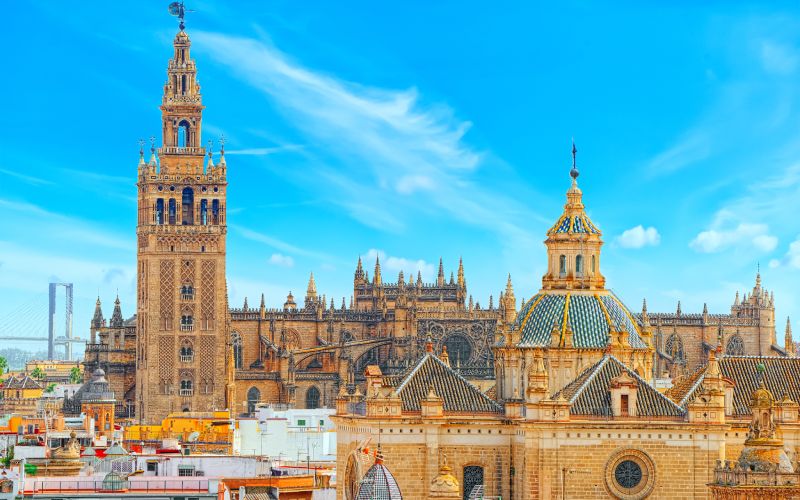 The cathedral and the giralda in the city of Seville. | Shutterstock

First came the Romans. Then the Visigoths. In 711 Seville became part of the Muslim kingdom of Al-Andalus, and in the 12th century it was ruled by the Almohad dynasty. In 1248 Fernando III of Castile conquered Seville, making it an eminently Catholic city until today.

All these civilizations coexisted with the Jewish community. Although there are traces of the existence of this minority in Spain since Roman times, it was not until the arrival of the Muslims that the Jewish quarter developed. The Semites also helped to perpetrate the conquest of Seville. During these years the Jewish quarter of Seville became one of the most populated in the 11th century -with some 3,000 Jews- and its inhabitants were mainly engaged in crafts, medicine, agriculture and the collection and lending of capital.

But in the 12th century the Almohads imposed great restrictions against them. Many decided to flee to the north of Spain. Until, with the reconquest of Fernando III, the Jewish community re-emerged. Between the 13th and 14th centuries, the Semites boosted the economy of Seville and were rewarded, especially by King Alfonso X. They settled in what is now the present-day Jewish quarter, enclosed by walls and next to the Alcazar, from where they sought to protect the population from external threats. The monarch also granted the Jewish people three mosques to be converted into synagogues. Today, only two remain, converted into churches: San Bartolomé and Santa María la Blanca.

However, the fame and power that this minority acquired forged hatred towards them, until in 1391 an assault on the Jewish quarter, which extends beyond the walls of Santa Cruz, ended the lives of about 4,000 Jews. When the Catholic Monarchs came to power they issued a decree in 1492 that the Semites had to leave the country within four months or convert to Catholicism. Between 150,000 and 200,000 left. Those who stayed, for the most part, changed both town and surname. Many took tree names. Thus, the surnames of Naranjo, Perales, Manzano… exist. 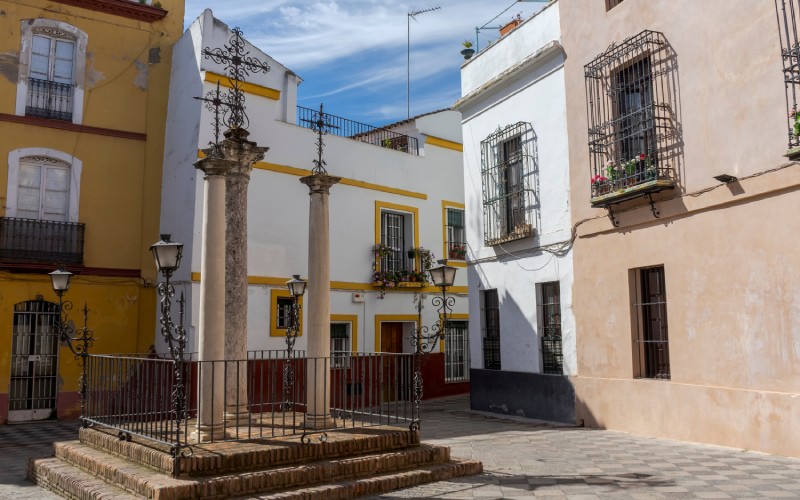 The old Jewish quarter in the Santa Cruz district of Seville. | Shutterstock

The streets of Santa Cruz

Santa Cruz is a neighborhood that reflects the past of its history in which coexist features of Islamic and Mudejar architecture, among others. In its streets and squares, as part of the Muslim culture, orange trees give color to the cobblestones and fountains fill the place with a slight rumor, only attenuated by the thousands of tourists who walk through its entrails.

In the Jewish quarter, the houses swirl around each other until they enclose very narrow and labyrinthine streets to get lost in. It is believed that these constructions were due to the little space for construction, as well as the shade they provide in a very hot Seville.

The monuments of the neighborhood: World Heritage Site

In addition to its streets and squares, in Santa Cruz are several of the most important buildings of the Andalusian city. First of all, it is worth mentioning the Cathedral of Santa María de la Sede, the largest Gothic cathedral in the world. This building was built on the remains of the Mosque of Seville, of which the courtyard of the Orange Trees and the minaret are still preserved, renamed the Giralda. The latter, built in the twelfth century, retains the lower part of the Arab construction. The upper part, however, dates from the sixteenth century in Christian times, when it became a bell tower. 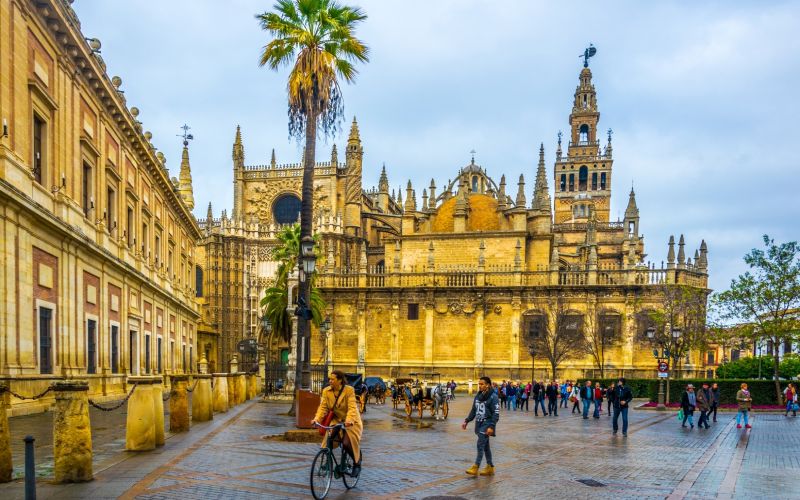 The Real Alcázar of Seville is also one of the monuments located in the neighborhood of Santa Cruz. It is a palace complex in which the Islamic, Mudejar and Gothic style coexist with Renaissance, Mannerist and Baroque elements. It is the residence of the royal family when they visit the city, which makes it the oldest royal palace in use in Europe.

In 1987 UNESCO declared these buildings, the Alcazar and the cathedral, along with the Archivo de Indias, a World Heritage Site. The latter was built in 1785 by order of Charles III with the intention of bringing together all the documentation relating to the administration of the Spanish overseas territories. The king chose the city because of its great commercial activity with America. 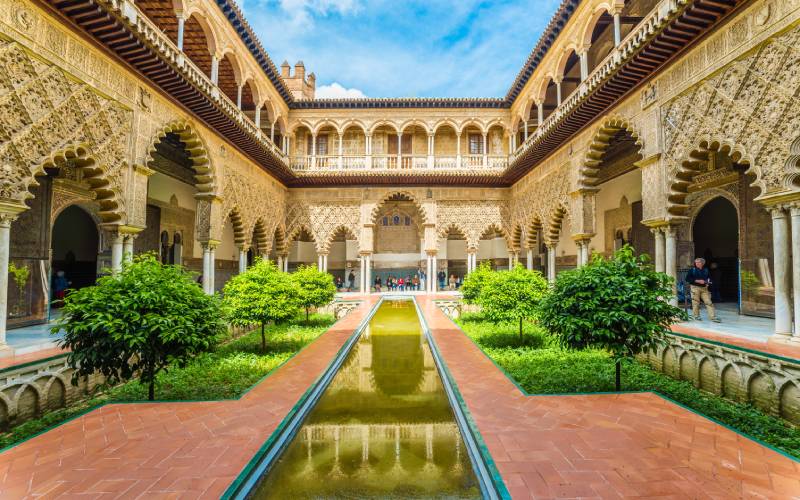 Courtyard inside the Royal Alcazar of Seville. | Shutterstock

The Hospital de los Venerables and the Murillo Gardens

Also located within the boundaries of Santa Cruz are the Hospital de los Venerables and the Jardines de Murillo. The former is a 17th century Baroque building that served as a residence for priests and now houses the Velázquez Center. Within the walls of this monumental building, with vaults dotted with brushstrokes and a beautiful courtyard in its center, await works by historical artists such as Velázquez, Murillo and Zurbarán along with more contemporary works, such as those of the painter Carmen Laffón. The Murillo Gardens, meanwhile, consist of 8,500 square meters that tinge with green the fabric of Santa Cruz. 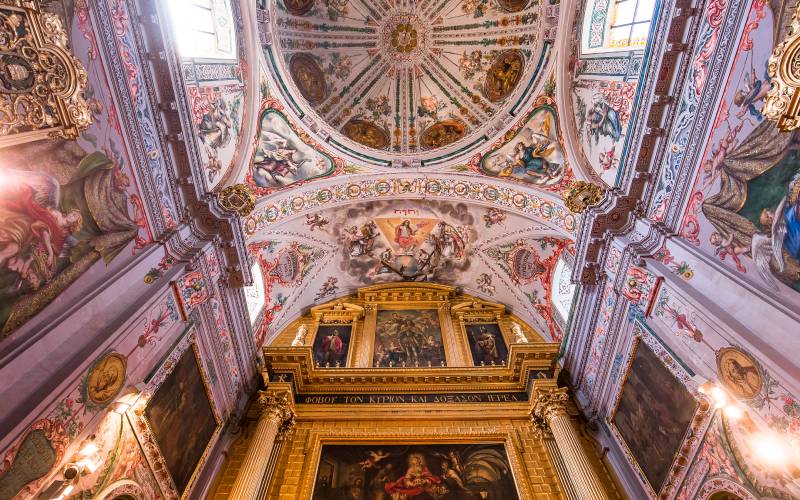 ‘The bad thing is not that Sevillians think they have the most beautiful city in the world. The worst thing is that they may even be right’, said author Antonio Gala about the capital.

Gala is not the only artist who has fallen in love with Seville. Painters like Sorolla were inspired by its streets. Diego Velázquez, born here, also used the splendor of Seville in the 17th century to develop his talents. Likewise, the painter Bartolomé Esteban Murillo was born in the capital. Located at number eight of Santa Teresa Street, in the Santa Cruz neighborhood, is the Casa de Murillo, the artist’s penultimate family residence.

In the streets of this neighborhood, in addition to art and imposing buildings, legends run rampant. The most famous is perhaps that of Sosana, a Jewish woman who betrayed her family for a Christian man who, finally, it is said, abandoned her. And in Seville there is no lack of anything.

Andalusia, art, cathedrals, history, Seville
It may interest you...