The rough urban distribution of Mijas allowed the last Moors from Málaga to resist for some time in this area. Already in the 20th century, the workers would turn the inconvenience of their slopes into the famous donkey taxis.

Since it is a small place, Mijas is perfect for a day trip! Its slopes are connected to a very particular means of transportation: the donkey-taxis, which allow you to experience how people used to move around this villa. Afterwards, we recommend the old Virgen de la Peña Hermitage, the Inmaculada Concepción Church, the bullring, and the Historic-ethnological museum of Mijas. There many surrounding areas that are also worth visiting. For example, you could go west to Marbella, and east to Málaga. 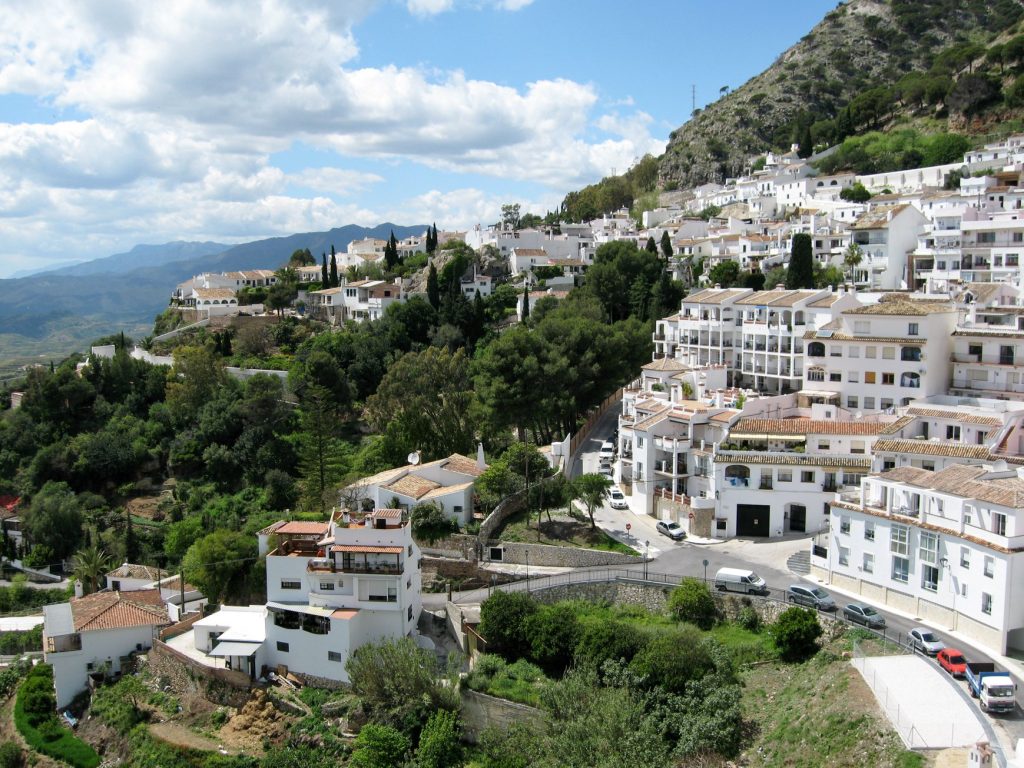 It is convenient, before going over what to see in Mijas, to know the local history. Being on a steep mountain overlooking a large valley, the area has been populated since the Bronze Age. Around the 10th century BC the nearby town of Fuengirola was a Phoenician colony. It is known that in the present location Mijas-Pueblo there was a sanctuary with a small town attached to it.

From the 2nd century B.C. Fuengirola became an important Roman municipality. For this reason, an important Roman road passed through the municipality of Mijas, described in the “Itinerary of Antoninus”. This caused that in the surroundings there are several sites with vestiges until the IV century. There are no references to the time of the Fall of the Roman Empire or the Visigothic domination.

Arabs and the Catholic Monarchs conquest

Like the rest of the south of the peninsula, in the year 711 Mijas was invaded by the Muslims. In the ninth century it was one of the first towns to join the unusual uprising of Ben Hafsun. Very little is known of the Arabic era from that time onwards. We only know that it was a very populated area and that it had three castles.

In August 1485, the army of the Catholic Monarchs assaulted the strategic castle of Fuengirola. Thus, the nearby fortresses, Mijas and Osunilla, agreed to surrender. However, as the epic defence of the city of Málaga continued, both rebelled. Once the current provincial capital was taken, the rebels lost hope and sought an agreed surrender. There was no mercy and they were enslaved. To avoid further revolts, the two rebel castles were dismantled and the one in Fuengirola was rebuilt. Around 1492, a distribution of land was made among some 50 Christian settlers. 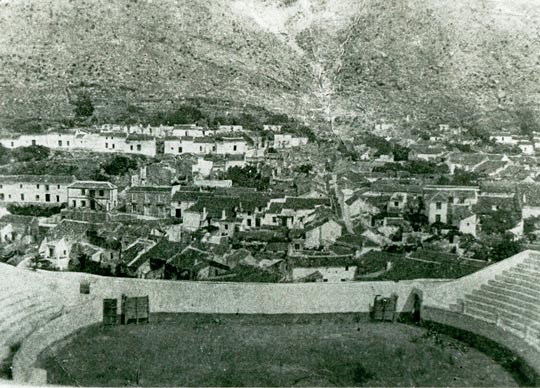 Old photograph of the bullring of Mijas

Mijas as a refuge

From the 15th century the coast would be attacked by Berber corsairs. When this happened, the local population used to take refuge in Mijas. To warn of the attacks, watchtowers were built in Calahonda, Cala del Moral and Calaburra. In addition, the Church of La Inmaculada was built with a fortified tower. The important local marble and false agate quarries made the population very rich.

Later in the century, on 2 December 1831, General Torrijos landed on a beach in Mijas. Along with him were 60 liberal volunteers, determined to speak out against the absolutist regime of Ferdinand VII. Everything was a trap. Persecuted by the Royalist Volunteers, a few hours later they sought refuge in Mijas. Since it was impossible for them, they had to continue their flight towards the north of the sierra. Torrijos and his companions would be captured two days later and shot without trial. In 1841 Mijas had one of the largest municipalities in Spain, so Fuengirola was segregated.

More than a century later, from 1960, there was an extraordinary boom in tourism. In that decade some visitors asked the day labourers to take pictures with their donkeys. They also liked to save the local slopes on their backs. That is how Julián Nuñez came up with the famous idea of donkey taxis. The initiative caused a furore to the extent that the town council issued specific ordinances for donkeys. These include identification tags, veterinary controls and even the availability of a campaign to welcome retired donkeys.

What to see in Mijas

Mijas village was declared a Historic-artistic site because of its beautiful white houses, located around narrow streets belonging to the Moorish urban planning and endless slopes that test the traveler’s physical fitness. If you do not want to be tested, you should call one of the famous donkey-taxis, which have become the symbol of the town. They are so important that they have their own parking lots where you can hire them –a donkey ride normally lasts around 15 minutes.

In our opinion, the most recommended main sight is the Virgen de la Peña Hermitage, carved in 1548 by Mercedarian friars on the rock of the promontory in El Compás. The image of the patron saint of the town was placed here: its originality and the valley’s view are worth the visit.

It is very interesting to see the Carromato de Max, a space similar to the famous old cabinets of curiosities or “House of Wonders”, where sellers try to surprise you with tiny artisan products, whose text and figures sizes can only be appreciated if using magnifying lenses (an activity worth to do if traveling with children). 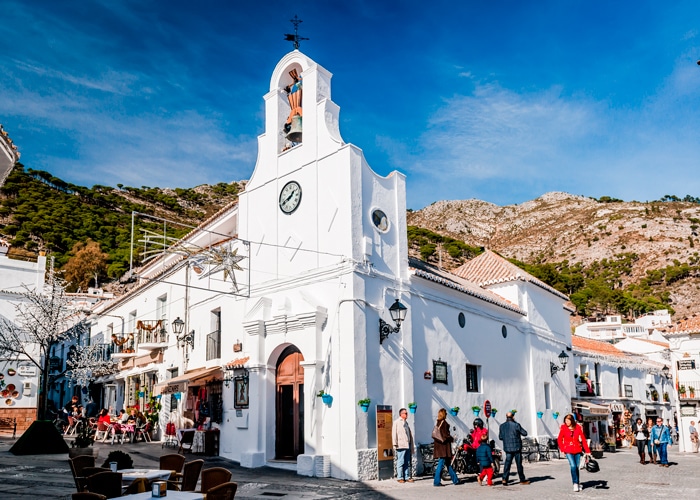 The Constitution Plaza is decorated with a beautiful marble fountain from the 19th century. The gorgeous San Sebastián Church can be found in a street with the same name: it is a building in a Baroque style from 1674, which has undergone several sackings in the past. The Historic-ethnological Musem of Mijas is situated very close to this area, standing out by its courtyard and the reconstruction of the hiding place of the famous “Mijas’ spy” (Manuel Cortés Quero, a republican activist persecuted during the Francoist era, who lived a clandestine life in this place from 1937 to 1969).

The bullring in Mijas is another must in our trip. The quite small, peculiarly square-shaped building is located in Muro Street. Up the hill you can find the Inmaculada Concepción Church, built upon the remaining of an old mosque, whose minaret was turned into a bell tower and provided a military aspect in 1510 in order to secure its defense against pirates. From its inside, we highlight its frescos representing apostles and its colorful plasterwork. 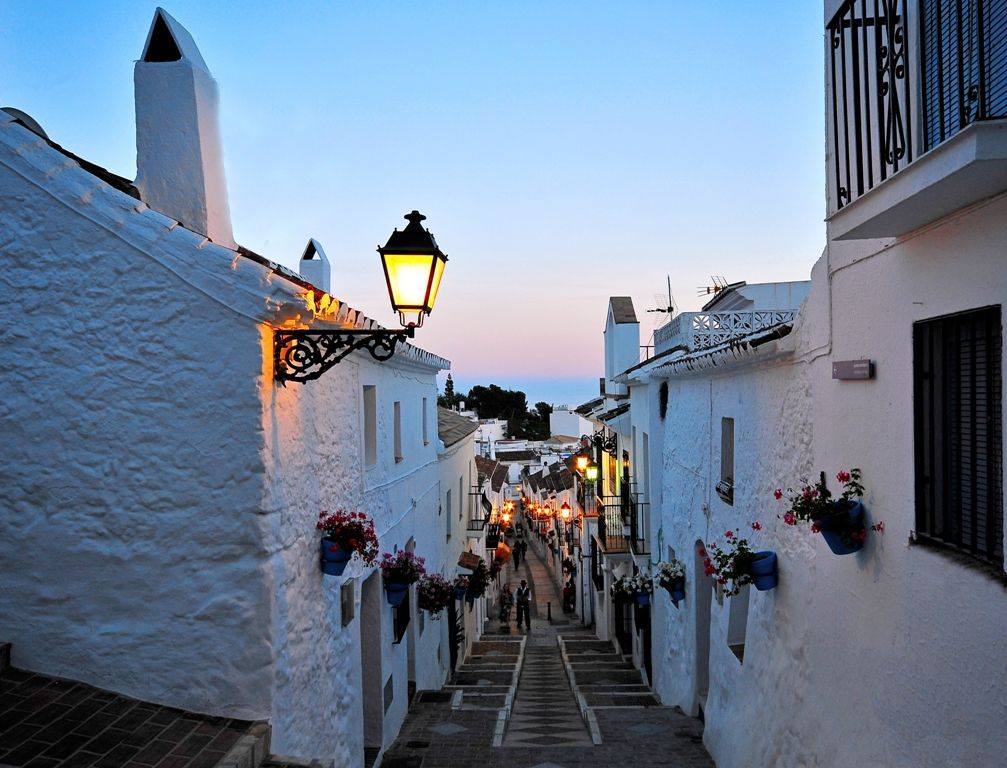 A street in Mijas

If you go through the coastal area, you will find some lookout towers built in order to alert the sighting of corsairs and offer the first defense against the pirates’ disembark on the town’s beaches. In the small bay of Mijas you can visit the Centro de Interpretación de las Torres Vigías. Here, we will explain how these towers used to work, who general Torrijos was and the events related to his disembark and execution by shooting, as well as some information on traditional fishing. The terrace of the fortress grant you an amazing view of the sea and its surroundings, being able to see the other lookout towers where the other guards where and how they used to communicate if any danger arose.

There is also a hippodrome in the coastal area, together with a good hospitality, restaurant and leisure offer (such as the twelve golf camps and an aquatic park). 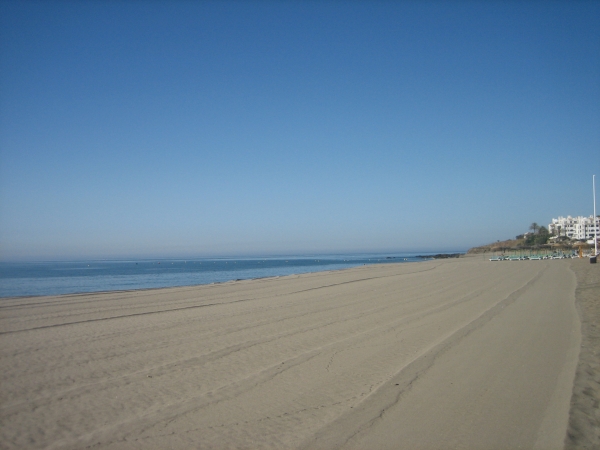 Andalusia, beaches, churches, Málaga, white villages
It may interest you...