Located in a strategic crossroads, the town is surrounded by mountains and olive trees. Near this Nasrid fortress is the famous El Torcal natural site. Do not miss out on the history and the best things to see in Antequera.

Plan your stay in Antequera

The impressive heritage to be seen in Antequera requires a two-day visit. Streets, convents and the old town follow one another until you reach the great Alcazaba of Antequera. Among the most striking monuments is the Royal Collegiate Church of Santa María la Mayor, or the Palace of the Marquises of Peña de los Enamorados. On the outskirts there is a famous group of dolmens.

Moving on to trips, the Parque del Torcal de Antequera is a must in nature. Nearby is Ardales, the access point to the famous Camino del Rey. Another more cultural alternative is to visit the historic Archidona.

There are many options to choose where to sleep and eat in Antequera. In addition, the town is a good place from which to discover the province of Málaga.

In order to enjoy everything you can see in Antequera, the best thing to do is to know something about its history. The necropolis of Alcaide and the dolmens of El Romeral and Menga, dating from 2500 B. C., have been preserved from the Bronze Age. After being occupied by Iberians, Phoenicians and Carthaginians, the territory fell into Roman hands. They built several enclaves in the vicinity, such as Singilia Barba, Antikaria and Acilia Plecusa. From this period is the Ephebus of Antequera.

After the conquest of 711, the Arabs called the place Madina Antaquira. This is where the current toponym comes from. It later became part of the rebel territory led by Omar Ben Hafsun. The Muladí established his capital in the Bobastro fortress, near Ardales. After being part of a Taifa and being ruled by Almoravids and Almohads, it was an important border stronghold from the thirteenth century.

Fernando de Trastámara, Regent of Castile, would go down in history as Fernando de Antequera. The reason for this was to lead the Christian army during the conquest of the city on 16 September 1410. In 1441 the place received the title of City. Shortly afterwards Henry IV gave it the honour of “Muy Noble”.

During the 16th century Antequera became one of the main cities in the region. This was due to the fact that it was a place where large commercial routes passed through. The hustle and bustle led to its having a printing press in 1573.

During the Baroque period, it became an active cultural centre. The Cátedra de Gramática y Latinidad of the Collegiate Church of Santa María la Mayor was the main reason. Juan de Vilches passed through it, among others. In addition, the town had countless palaces, churches and convents. The guild of silversmiths, gathered around the Confraternity of San Eloy, amassed great power and fortune. 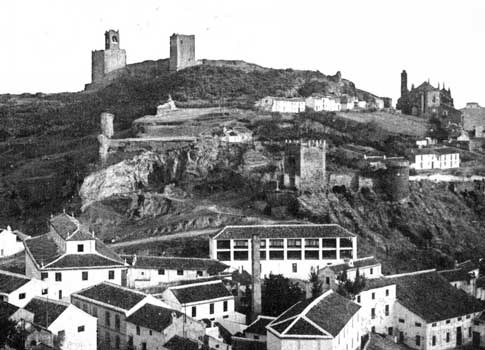 Between 1810 and 1812, Antequera was taken over by the French, who suffered great guerrilla harassment. Later its surroundings would become known for banditry. The textile industry prospered and olive and cereal cultivation was recovered. Andalusian nationalism was deeply rooted in the area. In fact, in 1883 the Declaración de Antequera, a project for an Andalusian constitution, was given there.

Malaga’s first newspaper, El Sol de Antequera, was based in the city. During the gestation of the autonomous government, in the so-called Democratic Transition, it played an important role, even running for the office of autonomous capital. Although it failed, today it contains the Kilometre 0 of Andalusia, despite not being exactly its centre.

What to see in Antequera

We should start our visit in the Alcazaba, with a Homage Tower from the 16th century. From here you can visit the Torre Blanca, the Postigo de la Estrella, Puerta de Málaga or Puerta de Granada. The famous Santa María La Mayor Royal Collegiate Church (1514-1550) is also around. The building includes many ashlars from previous Roman constructions. Its urban front is crowned by Renaissance balustrades and still Gothic pinnacles. The spectacular interior space, with three naves, lost its ornamentation following its looting during the Civil War in 1936. However, it still has beautiful coffered ceilings.

There is another Collegiate Church called San Sebastián, from the 16 century as well. It stands out because of its plateresque façade and Baroque bell. It is located in a plaza which signals the Kilimetre 0 of Andalusia.

There are numerous churches in Antequera which are worth a visit. We recommend you visiting a couple of the list we are now providing you. San Pedro Church (16th-17th centuries), San Juan Church (16th century), Santiago Parish (remodeled in the 19th century, it has a retablo of the virgin of health from the 17th century), Loreto Church (1693) or San Juan de Dios Church (17th-18th centuries). 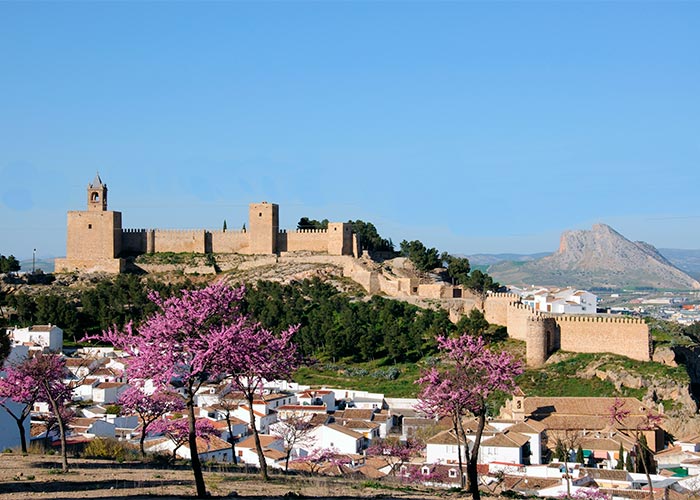 Other fascinating places in Antequera

However, not all buildings are religious, we highlight San Zoilo Royal Monastery, which has a beautiful retablo from the 16th century. Several houses are worth a visit in Antequera; as with churches, we recommend you visiting a couple and then enjoy yourself just walking around: Conde Colchado House, Ramírez House, the Municipal Palace, Pardo House (1636), Pinofiel House (1762), Colarte House (18th century), Marquis Villadarias Palace (18th century) and Nájera Palace (18th century). San Juan de Dios Hospital (18th century) is also interesting, and so the place called Pósito (17th century), housing the archive from the town.

In the outskirts of the city, heading East you will find the archeological sites of the dolmens of Antequera: an interpretation center offering interesting information about the atmosphere and constructions from the region. Finally, as we mentioned before, we recommend you visiting Torcal de Antequera natural park, with many natural attractions. Also, on the road to Archidona, you will find Menga’s Cave, with remains from 2500 BC.

Castillo de Colomares, the most imaginative tribute to Christopher Columbus
Colomares Castle is a monument built for the glory and tribute of the figure of Más información

Torremolinos, legendary international tourism destination since the 1950s
[vc_row][vc_column][vc_column_text]The municipality of Torremolinos is located in the province of Málaga, in the autonomous community Más información

Torrox, the town with the best climate in Europe
[vc_row][vc_column][vc_column_text]The municipality of Torrox is located in the province of Malaga in the Autonomous Community Más información