Cueva del Tesoro (Treasure Cave) is a karstic gem, as it is the only cave of underwater origin in Europe and one of the three known in the world. It was formed underwater millions of years ago, like an underwater cave, but then it emerged to the surface; making it a very rare occurrence on the whole planet, the only one in Europe. It is located in Rincón de la Victoria in the province of Málaga, in the area known as El Cantal. Curiously, this area is named after the cantales, which are smaller cliffs that originated during the Jurassic period. In addition to the small lakes that can be seen inside, the Cueva del Tesoro is named after an ancient legend that associates it with a treasure lost among its cavities and never found.

Origin of the Cueva del Tesoro 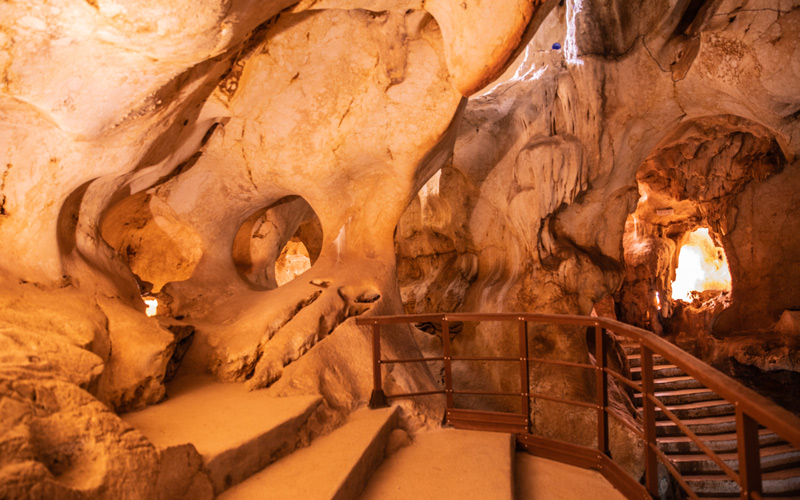 Formerly called Cueva del Higuerón, the Cueva del Tesoro is located only ten kilometres from the capital of Málaga, specifically between Cala del Moral and El Rincón. The origin of this cave is related to the Jurassic period. It is a limestone cave that emerged gradually from the sea, through different stages. While it was an underwater cave, the sea formed galleries characteristic of this type of cave, with gorges and columns that make Cueva del Tesoro so special. Later, the cave began to rise as a result of underground pressures. 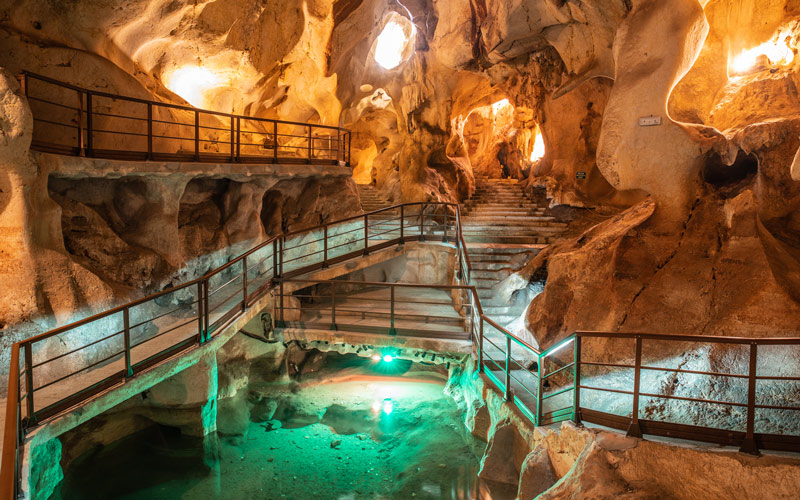 Over time the cave rose above sea level, moment in which different freshwater filtrations took place, giving shape over thousands of years, also thanks to erosion, to majestic stalactites and stalagmites related to caves of terrestrial origin. Therefore, not only has it become the only cave of underwater origin in Europe, but it also has the peculiarity of having particularities related to sea caves and land caves.

In this way, the Cueva del Tesoro currently has approximately 500 metres of galleries and a fascinating area of lakes. Human activity throughout its history has also played a very relevant role, as remains from the Paleolithic and Bronze Age were found in its galleries. There were also cave paintings and certain remains that indicate that it could have been a place of worship and sacrifice. 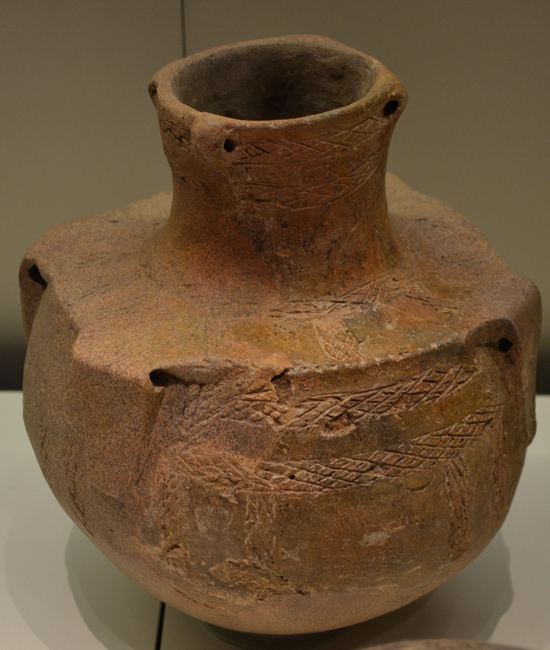 Inside Cueva del Tesoro, archaeological finds of outstanding value have also been found; the result of various excavations carried out by experts over the years. A sample of these remains is on display at the National Archaeological Museum, located in Madrid. Thus, inside the cave, abundant vases and ceramic fragments were found that correspond to the so-called Neolithic of the caves. Numerous pieces of flint have also been found, such as an arrowhead. But not only have these artefacts been discovered, from the Upper Palaeolithic a bison fossil bone was found, as well as two complete skulls that belonged to humans.

Legend of the hidden treasure

The oldest recorded data on Cueva del Tesoro and the legend of the five Mohammedan kings date back to the 18th century. The name of Cueva del Tesoro is part of an ancient legend that could well serve as a script for an Indiana Jones-style adventure film. Legend has it that the treasure of an Almoravid dynasty was lost at sea after it was taken on board to reach Al-Andalus. Nothing was known about the trace of this treasure until in the 17th century a monk collected the legend in a manuscript in which he places the cave of El Higuerón as the place where the treasure was hidden. 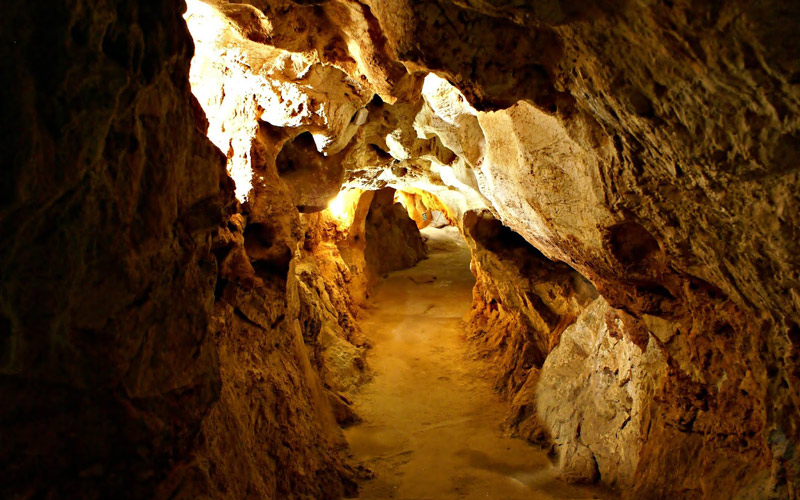 In 1789 the story was published by Cristobal Medina Conde in a work called Conversaciones Malagueñas. In this work it is stated that El Higueron cave was used in 86 B.C. by Marcus Crassus, a Roman aristocrat and politician, to hide after fleeing from Rome. He would have taken refuge here for eight months to avoid being found.

Later, as part of excavations in the cave, Professor Laza Palacio found a ceramic lamp in which six Almoravid gold coins dating from the time of Amir Ali ibn Yusuf were hidden. This discovery only served to stimulate the desire for a treasure hunt.

Several people have devoted time in their lives to looking for it. One of the best known is Antonio de la Nari from Switzerland. He spent 30 years searching for the treasure among the cavities of the cave; which is why it became known as the Swiss’s cave in honour of his unbreakable spirit. To achieve this goal, he did not hesitate to use dynamite and explosives to blast his way through the cave walls; which would eventually lead to his death in 1847 during a failed explosion.

What to see in its interior 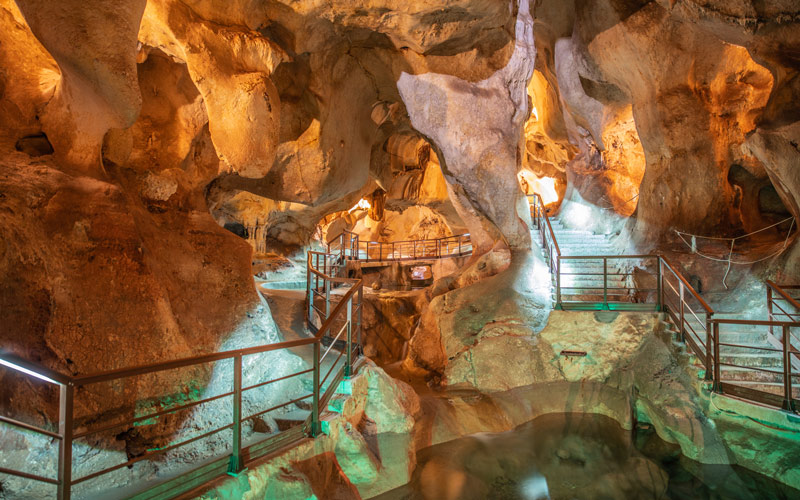 It is possible to visit the interior of Cueva del Tesoro all year round, and it is adapted for people with disabilities. It is a tour that has different rooms, each with its own peculiarities. The visit begins in the room of the Virgin; the last one discovered and the place where the six gold coins mentioned above were found. As you descend through this room, you will see an exhibition of archaeological remains. In it, the well of El Suizo, the work of Antonio de la Nari; which emerged during his dynamite explosions, attracts attention. 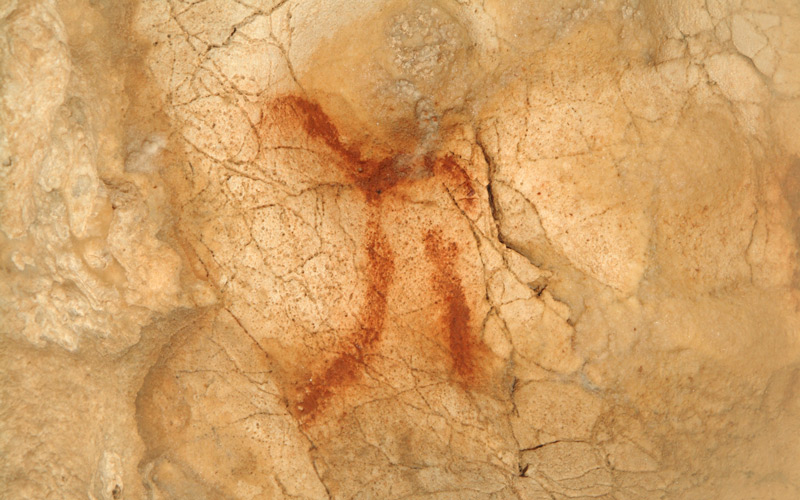 The tour continues in the Marcus Crassus room; so called because Marcus Crassus himself was hidden there for no less than eight long months. There is also a cave painting area, although it is closed to the public.

After this, the route continues to the room of the Eagle; where a large rock reminds us of the figure of this bird of prey. After this, the Labyrinthine galleries appear, where you can see many rock formations and plays of light. 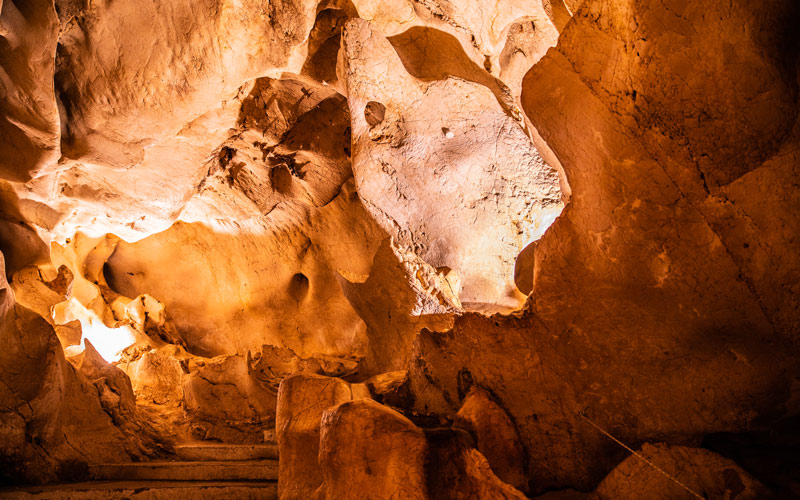 Perhaps one of the most interesting rooms is the room of the Sanctuary of Noctiluca; goddess of the moon and the night. A temple with ashes from animal sacrifices was found here.

From here you can go to the Volcano room; where you can see a hole that ends in a chasm that is believed to end in the sea. Its name comes from the increase in temperature that occurs in this room; as it is the innermost one in the cave. Returning to the room of the Virgin, the beautiful room of the Lakes is discovered before the visitor; where water currents can be seen and three beautiful natural lakes that give the space a magical atmosphere.

Andalusia, archaeological sites, Caves, Málaga
It may interest you...