The Cortijo Jurado is one of the most curious and enigmatic places in the whole province of Málaga. It is located on the outskirts of the city, in district 9, also called Campanillas neighborhood. It is practically next to the road, where this hacienda was built in the mid-nineteenth century. This building is known for the numerous urban legends that revolve around it. It makes sense, because it contrasts with the surroundings where dry vegetation abounds and stands as a solitary, isolated and mysterious building.

A history linked to aristocratic families

The history of Cortijo Jurado is linked to that of the Heredia family, a highborn lineage that came from La Rioja and settled in Málaga. Although the origin of the building is not entirely clear, it is known that it was built during the 30’s of the 19th century. Its initial function was none other than to serve as a stay for the family’s moments of escape and holidays. At the same time, its agricultural possibilities were exploited. Its workers took advantage of the excellent conditions to sow and fatten cattle in the surroundings. 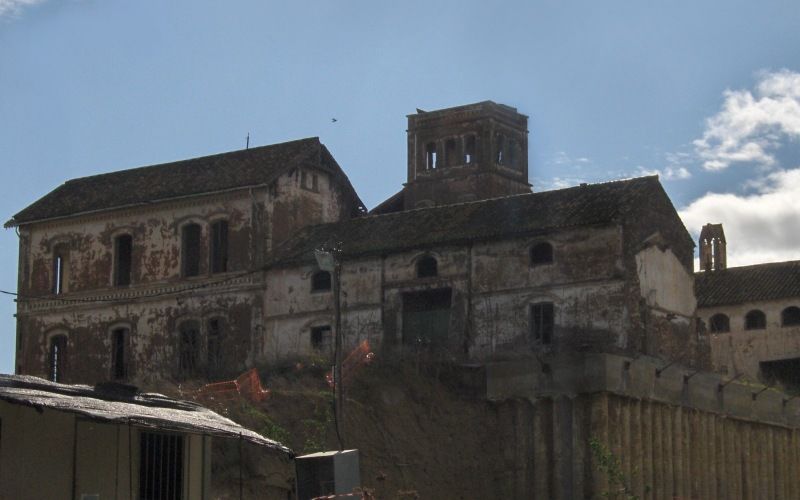 Views of the Cortijo Jurado, years before the remodeling. | Wikipedia

A century later the coffers of the Heredia family went bankrupt, leaving them in the deepest bankruptcy. For this reason they sold the house to their friends the Marquises of Larios, who in turn transferred it to the Quesada family. Finally, in the last part of the 20th century, it was acquired by the Vega Jurado family, to whom it owes its name. Today, it is owned by the company Pantie S.L., which is looking for a buyer for the estate, valued at 12 million euros. For a while it was rumored that the owners wanted to build a luxury hotel, then an old people’s home, but nothing concrete is known to date.

The building is an architectural rarity, as it combines characteristics of Spanish architecture with details of British neo-Gothic and even has furniture and decorative elements typical of Scandinavian countries. This stately farmhouse is a hybrid of styles, an object of study by architects in the area.

It is known to have more than 2,500 usable square meters. Everything orbits around its central courtyard, on which its numerous rooms are built. It has a tower that is perfectly visible from the outside and a small chapel.

At the beginning of this century it was possible to access the interior of the building and take photographs of its lamentable state, with its deteriorated rooms and its sinister and dangerous tunnels. It became a gloomy and disturbing building until the remodeling of its facade, which gave it a bit of a facelift. For this reason, it is not strange that it ended up being the epicenter of legends, sometimes dark ones. 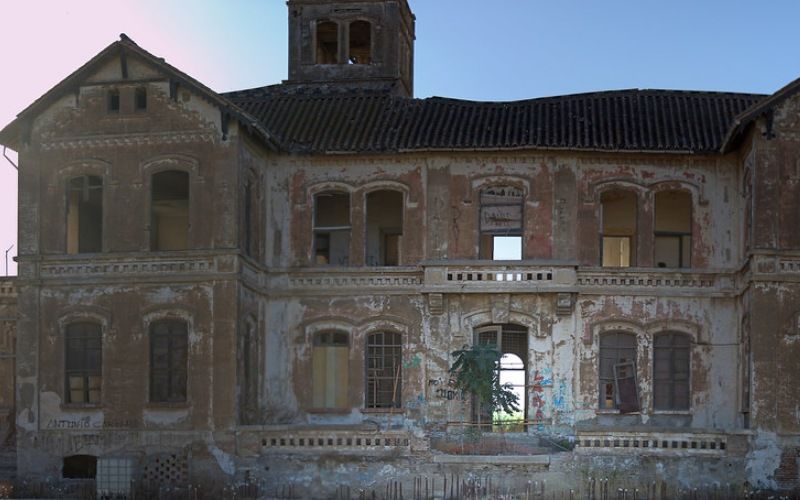 The Cortijo Jurado, before washing the face of its facade, looked sinister. | José Carlos Castro

A place for the most dark folklore

For years, the Cortijo Jurado has become a place frequently visited by fans of mystery and the paranormal. Not in vain, this place is and was the object of pseudoscientific reports and investigations of all kinds.

The neighbors of the place have told over time many stories about the house. The first legends, the original ones, assured that many young girls who were hanging around the farmhouse disappeared, back in the late 19th and early 20th centuries. These girls were murdered, according to folklore, with practices related to Satanism, in a bloody and dark way. The bodies of the victims of these demonic rituals appeared later in the surroundings of the building, especially in the surrounding area of the Campanillas River, where some corpses were seen floating.

The legend places the Heredia family in the eye of the hurricane. It is said that they were part, together with other aristocratic families, Los Larios, of a kind of satanic sect. To make matters worse, this association was linked to the British Isles and it was said that they carried out violent sexual practices. It is said that they chose their victims carefully , always looking for young people, and that they used subway tunnels and clandestine passages to kidnap them.

There are more legends linked to Cortijo Jurado. The first one refers to an old and supposed worker, Manuel Martín. Brave, he managed to enter the building as part of a bet with his co-workers. He discovered that the passages, tunnels and torture rooms that were told half-jokingly in gossip were as real as life itself. He even found the bones of corpses. As he ran away from the place, he kept hearing voices and strange noises in his head. They lasted so long that they plunged him into a deep madness.

Something that made its cursed legend grow bigger was the use of Cortijo Jurado during the Civil War. There is evidence that it was used as a hospital during the most turbulent years of the conflict. Also, prisoners were imprisoned in those basements.

Over the years, the Cortijo has been frequently visited by mediums, storytellers, the curious and journalists of the paranormal world. The building has been the subject of hundreds of reports and even today is part of the black legend of Málaga. Today it is still a place of pilgrimage for lovers of legends and mystery.

The Cortijo Jurado has also been the subject of study by sociologists and historians, who wonder how it has been able to perpetuate itself as an archetypal haunted house for so long. As for how the Cortijo Jurado is today, although its exterior facade was rehabilitated, obtaining a pinkish appearance, the truth is that the interior is still totally abandoned and deteriorated. The attempt to convert it into a house-hotel was a failure and the property is still apparently abandoned, for sale for 12 million euros.

The truth is that the neighbourhood association of the area demanded in recent years that a residence for the elderly be built there instead of a hotel, but the proposal is stuck in the bureaucratic labyrinth of the administrations. Whether it will finally get back to life inside, overcome its folklore, is a question that only time will answer.