Capital of kingdoms and Renaissance architecture

Located on a high point above the valley of the Guadalquivir and surrounded by majestic mountain ranges, the monumentality of the town is immense. This is because it was both a Moorish and Christian kingdom.

Plan your stay in Baeza

To visit the many buildings to be seen in Baeza it requires a full weekend. Those who have more time can go to Úbeda. To the west, on the other hand, Linares and Bailén await. Another alternative that is always appealing is to go to Jaén, the provincial capital.

In order to enjoy what you see in Baeza, it is a good idea to briefly review its history. From the 5th millennium B.C. are the sites of Los Horneros and Los Morales. Later, between the 7th and 4th centuries B.C., the Iberians controlled a village on the Cerro del Alcázar. Biatia would be the name that the Romans gave to Baeza, being declared a municipality in the time of Vespasian. During the period of Visigothic domination it was the seat of a bishopric.

From the 8th century the Muslims took control of the area. The name they used for the city was Bayyasa. After the fall of the Caliphate of Cordoba, the rich town was very disputed. Thus, it belonged successively to the Taifas of Murcia, Almeria, Denia, Granada, Toledo and Seville. Be that as it may, the Almoravids took it in 1091. Later, Muslims and Christians alternated successively the control of the place.

The Kingdom of Baeza

Under Castilian protection, between 1224 and 1226 the Taifa of Baeza was maintained, led by King al-Bayyasi, El Baezano. Accused of treason, the Almohads beheaded him in Almodovar del Río. Then, Ferdinand III the Saint took control of the town, defending it from the Mohammedan attacks. In this way it remained for twenty years as the capital of the Kingdom of Baeza. The monarch granted it the Fuero de Cuenca to attract Christian settlers, becoming a starting point for the reconquest of Jaén. That is why it was called “Nido Real de Gavilanes” (Royal Sparrowhawk’s Nest). The place welcomed until the 15th century the “Baezana civil war”, between knights of the lineages Benavides and Carvajal.

After the end of the conquest of Granada, two centuries of agricultural expansion began. The subsequent wealth financed numerous public works, including a university. The continuous ecclesiastical foundations stand out. Much of its heritage would be affected by the 1755 Lisbon earthquake.

Already in the 19th century there was an increase in confrontations between labourers. Under a socialist or anarchist organization, they confronted the landowning families that had controlled the population since the Reconquest. The agrarian reform launched by the Second Republic to distribute land did not work. Soon after, the military coup d’état and the bloody Civil War would follow. Finally, in 2003 UNESCO declared the site a World Heritage Site.

What to see in Baeza

Buildings with an interesting past

To get to know the city, the best thing to do is to start the tour with what to see in Baeza at its Alcazar. It housed the Church of Santa María del Alcázar, as well as a palace where the authorities resided. Isabella The Catholic ordered its demolition because it was no longer militarily necessary and was the target of the fighting between Benavides and Carvajales. In this way, the hill was gradually abandoned.

The main building to see in Baeza is the Cathedral of La Natividad de Nuestra Señora. Its construction began in 1147, in the place of the mosque, taking advantage of its minaret of the eleventh century. The original construction collapsed in 1529, and was rebuilt in the Gothic style. However, it would fall again in 1567, keeping only the head. The definitive design is due to the Jesuits, who used a Renaissance style with Herrerian influences. The complex has three naves and 19 chapels plus the main one. In the main front the relief of the Nativity stands out. Inside, the Golden and San José chapels stand out. Also the splendid choir screen, the pulpit and its baroque silver custody.

Next to the Cathedral of La Natividad de Nuestra Señora is the Seminary of San Felipe Neri (1660). Of austere appearance, its main decoration is the cheers painted by students on its façade (17th and 18th centuries). Its monumental doorway and chapel stand out, being a university installation.

There are countless churches to see in Bazea. For example, the Church of La Santa Cruz (13th century) is a rare example of Romanesque. Meanwhile, the Parish Church of San Andrés (16th century) was designed in the Plateresque style. For almost a century it had the status of a collegiate church. The place houses an outstanding collection of 15th century panels and valuable sculptures. In addition, the southern facade, its tower, the 17th century altarpiece and the organ are outstanding.

Likewise, the Church of San Pablo (15th century) is a temple with three naves. Although it started out as Gothic, it has Renaissance elements such as its entrance doorway. Inside there is a 16th century panel representing the Epiphany. At the same time, its baroque organ and the image of Jesus the Nazarene deserve attention. Finally, there is a visit to the Church of El Salvador (13th to 16th centuries). It was started in Gothic style and reformed in Renaissance.

There is also no lack of excellent convents to see in Baeza. To begin with, there is the convent of La Encarnación (17th century), with notable paintings and a large baroque altarpiece. In Santa María Magdalena (16th century) the famous Cristo de la Caída (17th century) is kept. For its part, the imposing ruin of the Convent of San Francisco was built in the Renaissance style in the 16th century.

The Church of La Purísima Concepción (17th century), once a hospital chapel, is still visible. Meanwhile, the Jesuits built an imposing architectural complex of which the Chapel of St. Ignatius (17th century) remains. As for the famous Hospital de San Antón (16th century), it is the headquarters of the historical archive and library. 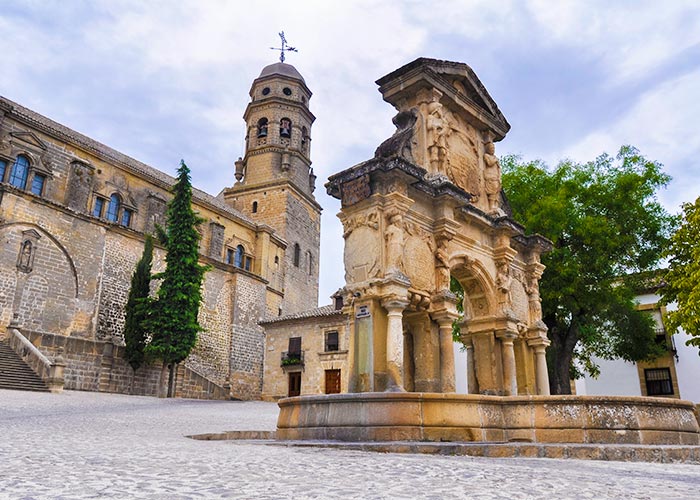 Santa María Fountain and, behind it, the Baeza Cathedral

The Antigua Carnicería (16th century), now a courthouse, was moved stone by stone during the last century to its current location. The frieze on the first floor and the coat of arms of Emperor Charles stand out from its beautiful facade. It also has large openings on the main floor.

The old University of Baeza was named after the Holy Trinity. It is a Mannerist building from the end of the 16th century. The complex has a monumental entrance door, an imposing cloister and a beautiful university chapel. Inside, the image of the Resurrected Christ (16th century), which is kept in the sacristy of the chapel, is already striking. At present it serves as an Institute of Secondary Education.

The Baeza Town Hall is located in the Old Prison and Palace of the Corregidor. It is worth stopping by to contemplate its plateresque façade, with the allegories of Justice and Charity that mark the entrance door. The Mudejar coffered ceiling installed in the Plenary Hall comes from the Convent of San Antonio.

There are several commemorative monuments of great interest to see in Baeza. The main one is the Arch of Villalar (16th century), which recalls the battle in which the local lineage of the Carvajales stood out. As a result of the visit in 1526 by Charles I, the Puerta de Jaén was built. On the other hand, the Puerta de Úbeda is a whitewashed tower that was dismantled by order of the Catholic Queen in 1476. In the same area we can emphasize the Los Leones Fountain, brought from Cástulo in the 16th century. It is presided over by a female figure standing on a column. Perhaps it is Himilce, daughter of the famous Hannibal. Finally, the Fountain of Santa Maria dates from the 16th century. 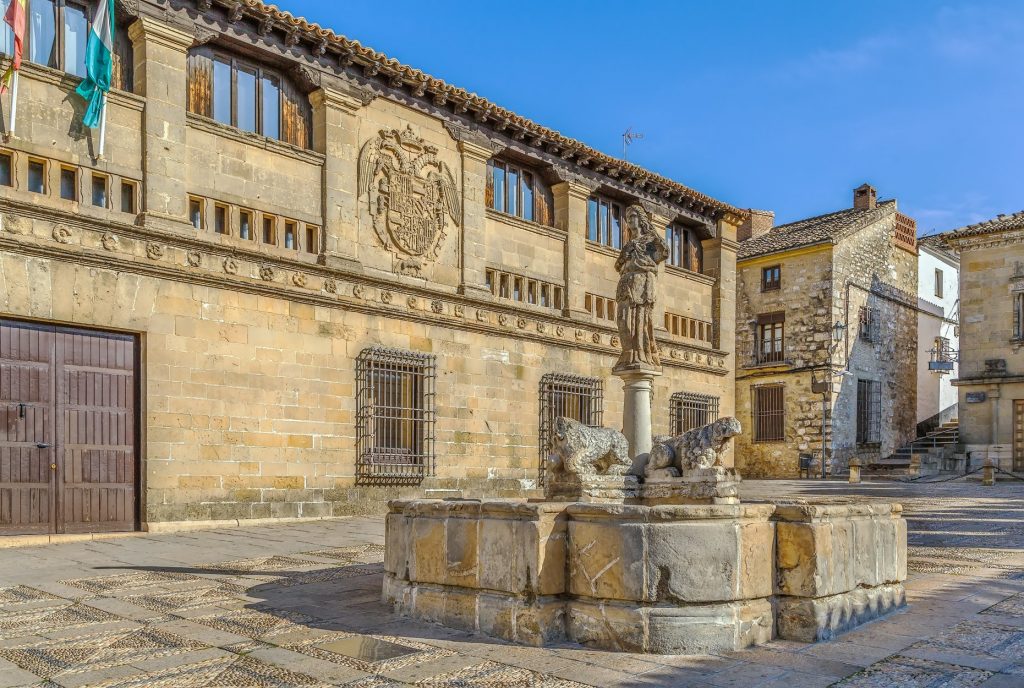 The importance of the local administration is reflected in the civil architecture. Thus, the Cancillerías or Casas Consistoriales Altas were the seat of the council between the fifteenth and nineteenth centuries. For its part, the Casa del Pópulo housed the Civil Court and the city’s Public Notaries.

In the area known as El Paseo, the Casas Consistoriales Bajas were built in the 17th century. Of these, the balcony from which the authorities contemplated the bullfights stands out. Next to it stands the Los Aliatares Tower (12th century), of Muslim origin. It is one of the few that survived the massive demolition of the wall. One of the emblems to see in Baeza is the Palace of Jabalquinto, executed in the Elizabethan Gothic style. Especially noteworthy is its front full of decorative elements. The polychrome coffered ceilings cover several rooms.

Among the many noble dwellings, the Casa Solariega de los Galeote (16th century) stands out. It has an attractive sunny side as a finishing touch to the façade.

Andalusia, cathedrals, churches, Jaén, monasteries, palaces
It may interest you...

Many of the most curious hermitages in Spain are great...
>> More information

Although summer and winter are the holiday periods par excellence,…

Cuna de conquistadores A stronghold disputed for centuries by Moors,…

Trujillo, cradle of conquerors in Extremadura
Cuna de conquistadores A stronghold disputed for centuries by Moors, Portuguese, Leonese and knights of Más información

The 11 most impressive glass buildings in Spain, beauty with a fragile look
There are many examples among Spanish architecture in which brick, stone or concrete have been Más información

Oropesa Castle, a Toledan Christian fortress on one side and a Muslim one on the other
In the Toledan part of the triple crossroads between this province, Ávila and Cáceres stands Más información