Granada is a magical city characterized by its mixture and combination of cultures. This gives it a fascinating historical heritage that enamors all who step foot in the city. In addition to the heritage, you have to mention its food, and above all, the joy of its people, who happily receive all visitors.

The city started 2017 with a 5% increase in tourism over the previous year. For this reason, Granada maintains its position as one of the most visited cities in Spain. It is also, in fact, selected every year by thousands of Erasmus students all around Europe due to its wide variety of programs for all tastes. It is a friendly and beautiful town, and its multicultural aspect characterizes it as one of the most attractive destinations for all visitors.

When one thinks of Granada, the Alhambra is the first thing that comes to mind, but there is a multitude of monuments and places worth visiting that are overlooked by many tourists. Would you like to hear about a free tour of Granada that will help you feel like a local in the city?

The Fountain of the Giants in the Plaza de Santa Ana serves as the starting point for this tour through the heart of the city. The tour lasts around two hours that, although is not enough time to get to know the whole city, will help you get closer to all the wonders of an unbeatable historic destination.

Through this tour, you will discover streets, plazas, and buildings with touches of the Gothic and Renaissance hidden in the city, as well as the most well-known monuments of the city. The Catedral de Granada (Cathedral of Granada), the Alcaicería, and the Capilla Real (Royal Chapel), where the remains of the rulers Isabel la Católica and Fernando de Castilla rest, are obligatory stops on this journey.

There will always be an unknown spot in the city that surprises you. Art reigns in the streets and the sense of Andalusian culture permeates every part of the city. Let yourself get caught up in the atmosphere of Granada on this tour through the old town and discover the impressive Christian and Muslim legacies that this town holds.

Would you like to join us on this free tour of Granada?

Spanish Virtual Museums to Visit from Home
Going to a museum no longer requires being in the actual place. Although there is Más información 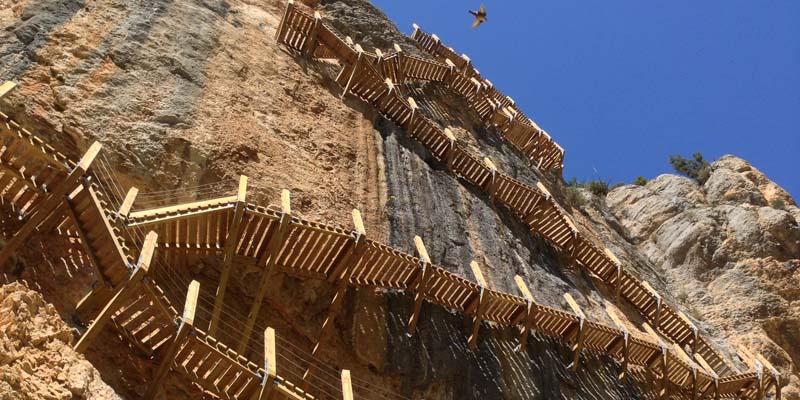 Walking along the vertiginous footbridges of Montfalcó
The Route of the Footbridges: a must see destination for lovers of hiking Aren’t you Más información

Hiking Routes to Do in One Day (II)
[vc_row][vc_column][vc_column_text]Nature, fresh air, and physical activity: what more could you need in a short hiking Más información