The mythical lighthouse that created a village

For two millennia, this fisherman’s town has been connected to the mouth of the Guadalquivir river. Chipiona is well known for its spectacular beaches and the most famous singer of cuplés, Rocío Jurado.

Plan your stay in Chipiona

Chipiona’s beaches, lighthouse, and old city are an irresistible magnet attracting summer visitors. Besides, although there are many things to do in Chipiona, the town’s surrounding areas cannot be taken for granted: Sanlúcar de Barrameda, going north, or Jerez de la Frontera, the Puerto de Santa María or even Cádiz, towards the south. They are regions very close to each other that stand out because of their beauty.

What to see in Chipiona

Before visiting the main monuments and museums of this locality, it is important to visit the essence of Chipiona: the lighthouse, located in Plaza de América. The current work, from th 19th century, is built upon the traces of a Roman fabric of 69-meter height. Below this lighthouse, one can observe its fishing corrals and the traditional system employed to bring fishes into a sort of box that catches them once the tide rises. It only stopped working in 1898, during the Spanish-American war, and during the Spanish Civil War (1936-9).

Another magnificent building is the Holy Convent of Nuestra Señora de Regla, together with its beach with the same name. It includes traces of the old fortress of Ponce de León (14th century). The new Neogothic style church that is still preserved nowadays was opened in 1906. Next to the Sanctuary is the Humilladero (17th century), the name given to the shrine employed to hide the image of the virgin. This Virgin, who saved Cyprian from a great storm in the strait, is the patron saint of all sailors (an image worshiped in all the sanctuaries where it is printed of the Canary Islands and some old Spanish colonies such as Cuba and the Philippines.) 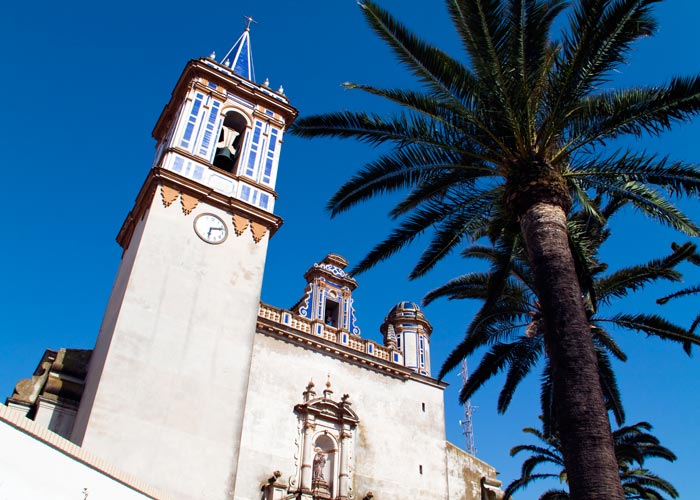 In Juan Carlos I Plaza, you can see Nuestra Señora de la O Church (16th century) and its tower’s colored-blu endings and its late Gothic style façade demonstrate deep changes. Inside this church we find the image to which the church is dedicated.

The Cruz del Mar Monument, in front of the beach with the same name, reminds us of the moment in 1755 when a tidal wave happened here, only killing four people, a miracle attributed to St. Christ of the Mercy’s intercession (and the reef Piedra de la Salmedina probably also helping since this place was the least affected by water intrusion in the entire coastline). On the other hand, the fishing port is available for visits to see how fish is auctioned since 10 am.

Boat Tour of Sancti Petri, the Old Fishing Town
[vc_row][vc_column][vc_column_text]Chiclana de la Frontera is one of the most popular towns to visit on the Más información

Discover the White Villages of Andalusia
[vc_row][vc_column][vc_column_text]Scattered throughout the south of Andalusia, between the provinces of Cadiz and Malaga, we find Más información