The province of Cádiz is full of fascinating villages like Bornos. In this charming town of less than 8,000 inhabitants, a 16th century example of urban planning is of outstanding importance. It is the palace of the Enríquez de Ribera family, a building carried out by the noble lineage of the Ribera family. It was built from the Fontanar castle and is one of the most beautiful, and unknown, buildings to be seen in the town. Not only is it beautiful, but it also bears witness to the history that goes from the Arab domination to the Christian conquest and culminates in the Renaissance. At present, an interpretation centre has been installed on the first floor of the building.

The history of the Enríquez de Ribera Palace 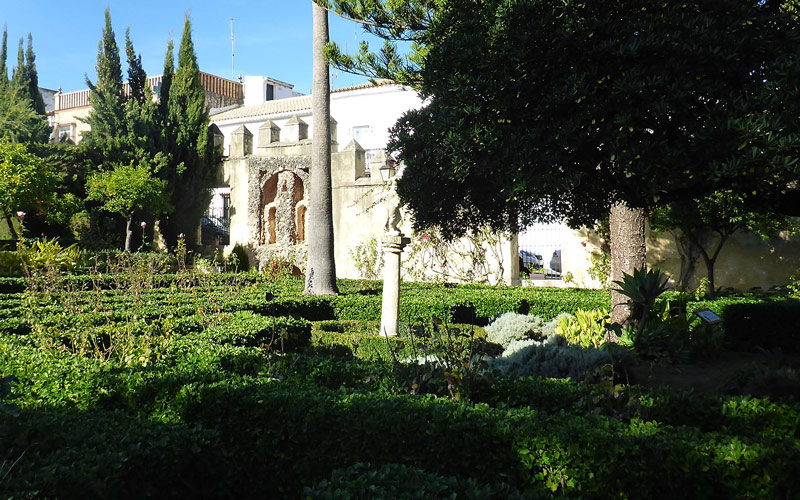 The Enríquez de Ribera Palace is one of the most unique buildings in Bornos and the surrounding area. Its construction took place in the Fontanar Castle, which had an Arabic origin. However, of the fortress only the keep and some canvases of the old wall located here have been preserved.

In 1398, the major Governor of Andalusia and also notary public Per Afán de Ribera el Viejo bought the castle of Fontanar as well as its belongings from its owners. Previously, the owners from whom he bought the fortress had paid for it to the lords of the Casa de Marchena, who in turn received the town and the castle as a donation from King Henry II back in 1387. 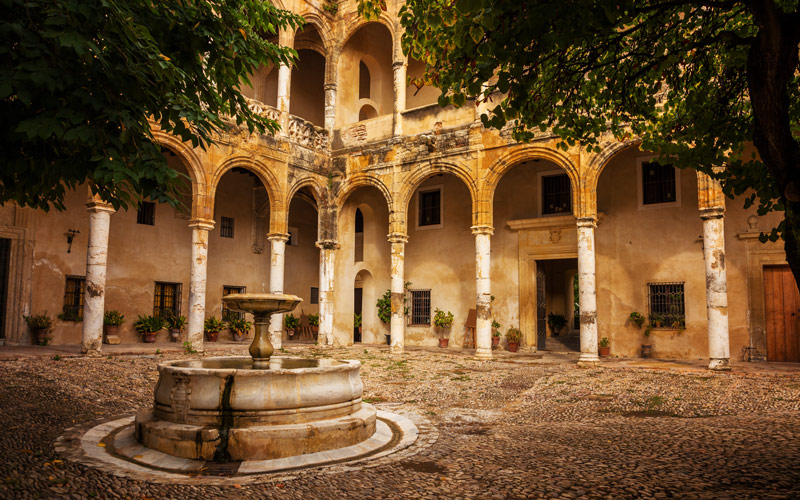 Finally, the castle ends up being restored and turned into a plateresque palace some time later; when it is acquired by the Enríquez de Ribera family during the 16th century. Within the family, the influence of the popular Don Fadrique Enríquez de Ribera, who was appointed the first Marquis of Tarifa by the Catholic Monarchs, was outstanding. He was in charge of contracting the Spanish and Italian artists who started the works. 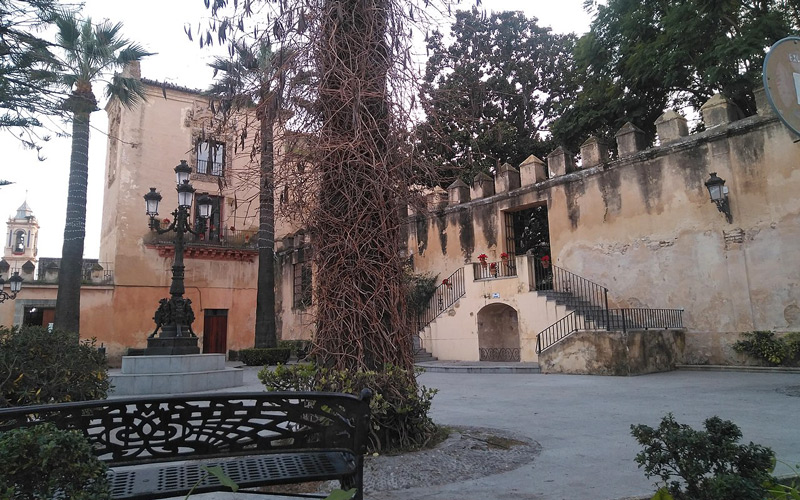 The oldest part of the castle is formed by the keep, with a very strong quadrangular structure. Its interior is arranged in different rooms. Specifically, the location of the castle is arranged in the southwest corner of the palace; structured around an arcaded courtyard on two of its sides. In addition, it has double floors with semicircular arches and a Gothic-style balustrade. The most interesting features are the gargoyles found in the arches on the first floor, as well as the gallery in the upper cloister where there is a late Gothic-style doorway decorated with cardinal leaves.

The tower is finished with a ridge made of fleur-de-lis, of which some remains remain today. Some traces of stretches of plaster with engravings made in the Segovia style also remain. The ducal crown can be seen hanging from the windows of the tower. 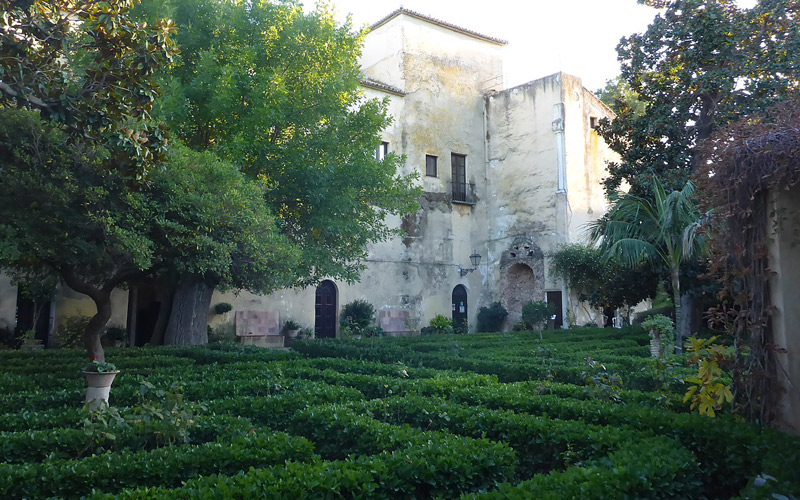 Per Afán III de Ribera y Portocarrero continued the renovation work that his ancestors began. He was the first Duke of Alcalá de los Gazules by privilege of Philip II, who ordered to bring from Italy a copious collection of marbles, part of which was to be placed in the Enríquez de Ribera Palace. 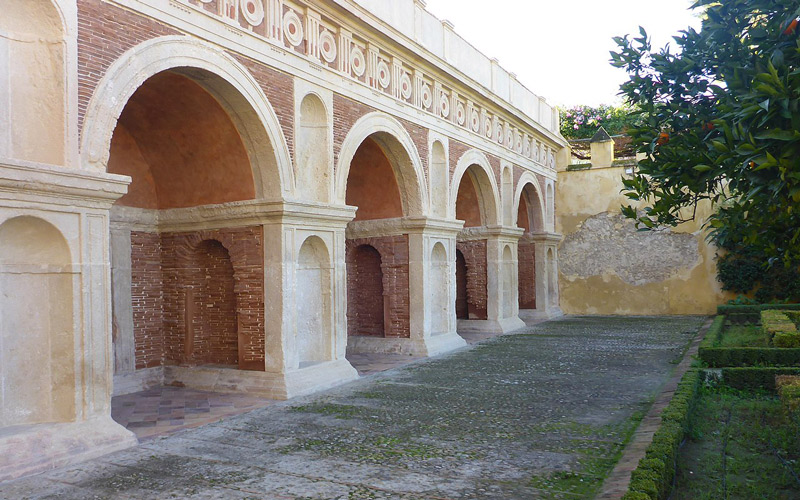 In the same way, he sends the Italian architect Benvenuto Tortello the adaptation of the old castle and the creation of a beautiful Renaissance garden. Declared Historical Garden of Cultural Interest, it is inspired by the Vatican‘s Belvedere courtyard. Its objective was to be able to exhibit its distinguished collection of classical sculptures; with mythological motifs in the arches and niches to be installed in the galleries of the garden. Here we must highlight the loggia that remains intact today. 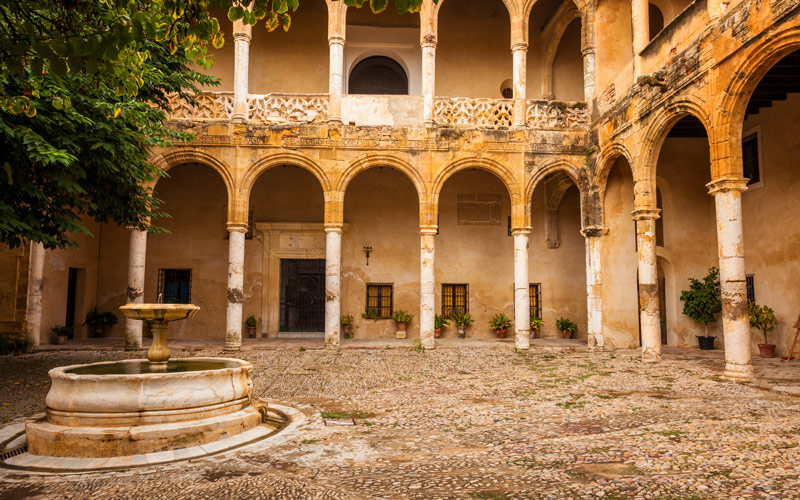 Although the work that was carried out between 1559 and 1571 was unfinished, the monumentality of the palace is unquestionable; so much so that it has been declared an Asset of Cultural Interest. On entering the Enríquez de Ribera palace, one enters a large courtyard surrounded by a spectacular cloister with arches over which a large upper gallery has been erected.  In the centre there is a marble fountain brought from Italy on which the coat of arms of the Ribera family rests. 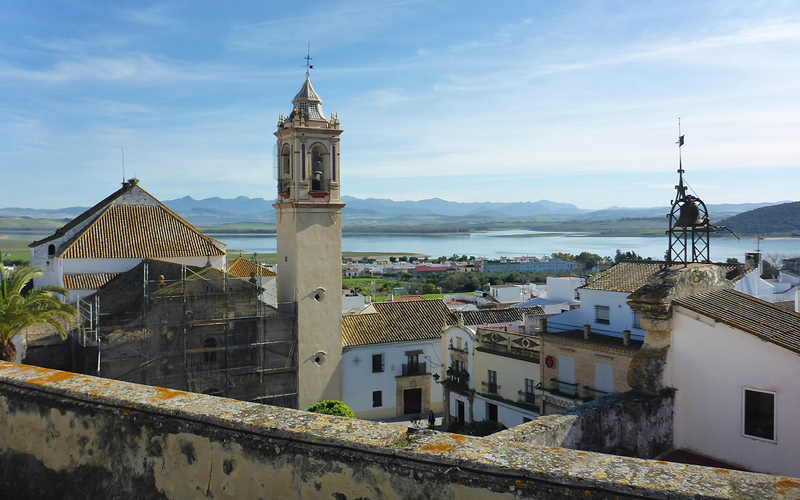 View from the top of the palace where you can see the reservoir and the church tower. | Source: El Pantera

The exterior of the building is notable for its plateresque style windows, framed with plant figures. The main entrance can be classified as austere; and the coat of arms of the Ribera family remains under a sober main balcony.

Andalusia, cádiz, palaces, parks and gardens
It may interest you...