The capital of the plastic sea

The second urban nucleus of Almería is a major tourist enclave. This farmhouse is surrounded by a sea of plastic formed by thousands of greenhouses. Thanks to them, huge quantities of high quality vegetables are generated. Beautiful, lively and warm, its beaches are very popular throughout the year.

Roquetas de Mar is one of the main tourist destinations on the coast of Almería. However, apart from enjoying the beach and the sun, things to do in Roquetas de Mar involve some other beautiful main sights, such as the Santa Ana Castle, the Church-Parish and the Lighthouse. Your visit should not take more than one day since it is a small place. However, if you are planning to spend a significant amount of time at the beach, your stay could take you longer and you might want to consider visiting the surrounding Almería, Tabernas, or the Cabo de Gata Natural Park.

What to see in Roquetas de Mar

Before tackling what to see in Roquetas de Mar it is best to review its history a little. Thus, since the Bronze Age there was a continuous population on the river bank that the Romans would call Turaniana. The vast majority of the ancient remains are from the Roman anchorage and population. Later on it would end up being Muslim. However, in the 12th century there were some very serious floods. These would cause numerous deaths and the destruction of buildings, so the place was abandoned.

During the Nasrid era, the population was fortified to defend itself from the increasingly common Christian attacks. These took over the citadel around 1488, reinforcing what is now known as the Castle of Santa Ana. However, three years later, the surrender of El Zagal deprived the building of military value. From then on, the Christian inhabitants worked their salt mines and dedicated themselves to fishing in order to survive. In the 16th century, the Almería Town Hall requested that a tower be built to protect them from the incursions of Berber pirates.

During the following century, corsair attacks and earthquakes destroyed the Castle of Santa Ana. By 1686, the government of Charles II did not have the resources to restore the fortress. The captain of militias, Luis de Castro, took the initiative and invested a thousand ducats to restore the towers of Rambla Honda, Cerrillos, Entinas, Guardia Vieja and the Alhamilla. In exchange he obtained the title of perpetual warden of the fortress. 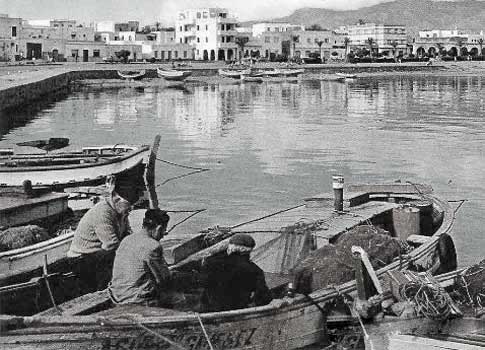 Once the area was secured, in 1737 the inhabitants of the neighbouring town of Enixy Felix broke up and cultivated the abandoned salt mines. In this way, they settled in the old Muslim population centre. Twenty years later they built a parish church.

Unfortunately, on August 18, 1783, a lightning strike hit the powder magazine of the Castle of Santa Ana, causing a huge explosion. The following year, construction began, and the Mayor’s Office took control. In exchange, it granted a noble title to the Castro family. Continuing with its bad luck, the fortress suffered serious damage during the earthquake of 1804. Due to this, the defenses were moved to the nearby coastal batteries.

Around 1950, the National Institute of Colonization reactivated the local economic activity. Thus, in 1963, Bernabé Aguilar set up the first greenhouse to improve productivity. This meant the beginning of a type of exploitation that served as a reference to many other Spanish orchards. In the end it would become known as “the sea of plastic”. On the other hand, in this second half of the century the tourist boom began, another great source of municipal wealth. In 1972, the State ceded the property of the Castle of Santa Ana to the Town Hall of Roquetas de Mar. Its reconstruction would extend until 2003.

What to see in Roquetas de Mar

We recommend beginning your sightseeing in the strategic fortress of Roquetas de Mar: Santa Ana Castle, also known as Las Roquetas Castle. This area used to house an old tower from the Nasrid period built by King Yusuf I in the early 14th century. However, instead of the tower, it was fostered by the city’s government to fortify the area in order to guard the salt’s loading and production two centuries later.

Earthquakes, the siege of Turkey ships, and the Crown’s limited economic capacity to afford the construction made it impossible to keep building until the 17th century. It was during the Sucession War of 1714 that the fortress would acquire a better appearance thanks to its strategic position to defend the area from the British and Dutch ships trying to disembark there.

Another symbolic sight is the Roquetas Lighthouse, which, beginning a couple of years ago, houses temporary exhibitions. Although it was open in 1863, it stopped working in 1943 since its tower is not very high and the quay of the port was extended. However, the lighthouse is still there, although off, because its light could not be distinguished from the light of the village.

The patron saint of the locality, the Virgin of Rosario, is located in the Church-Parish from 1757. The temple was built using a Baroque style typical of Castilians and it has a beautiful Mudejar coffered ceiling inside.

The city has had a Bull Ring since 2002, with a capacity of 7800 spectators, where a fair is held every July. Apart from the ring, there is also a bull-fighting museum that we recommend. If you go to the touristic center of the village, you will see the new Virgen de los Vientos Chapel, which has a modern and original design –it allows the celebration of religious ceremonies outdoors, apart from other cultural activities.

The municipality has more than 16 km of coast, 3 of which belong to the Punta Entinas Sabinal Natural Park, where the lushest posidonia meadow is located. We also highlight the sandy areas of Aguadulce, the Ventilla, the Romarilla and the Bajadilla.

Almería, Andalusia, beaches, castles
It may interest you...

Impressive Ruined Castles in Spain, a Shattered Past
The passage of time of some of Spain's castles has led these iconic fortresses to Más información