San Pedro cove is located in the heart of the Cabo de Gata-Níjar Natural Park, in the province of Almería. It has the particularity of hosting a hippie community, where its population lives isolated from the rest of society. In addition, it is one of the most beautiful beaches in Andalusia for its tropical paradise aspect, which makes it visited by thousands of people every summer.

San Pedro cove has an orchard of vegetation, very fine sand and turquoise blue waters. Its entry into the water is very progressive, which makes swimming very easy for those who want to cool off, also for children. When you are on this beach, on one side is the sea and on the other is the mountain, making it an ideal place for lovers of all kinds of nature. 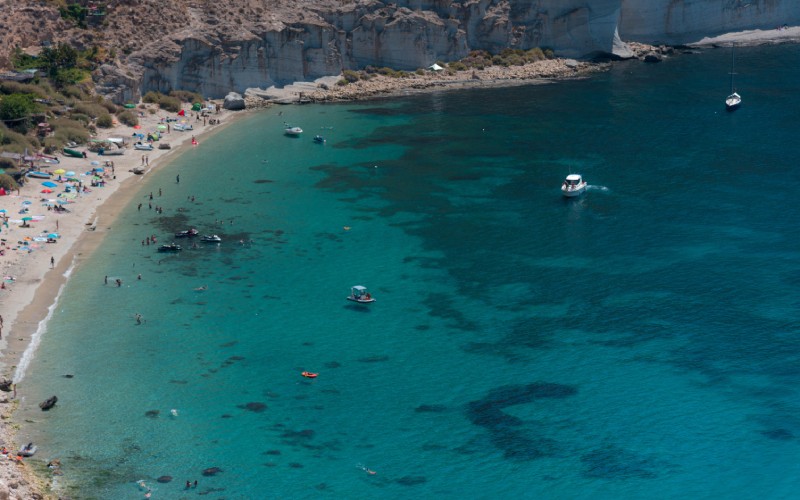 The beach has a length of 250 meters of sand and at both ends has rocky areas. The white sand at the bottom of the sea in this corner makes the water look turquoise, which is the great protagonist of many of the photos you can see of this beach. In addition, this crystal clear water allows diving to enjoy the seabed.

In addition, as if all this were not enough, it turns out that in this same cove are the ruins of an ancient fortress: the Castle of San Pedro. It is believed to have been built in the late 15th century in order to guard the coast from Moorish attacks after the Reconquest of the Catholic Monarchs. In the 16th century a tower was added and in the 17th century the castle was used as a prison. At present, this fortification is abandoned and cannot be visited inside. 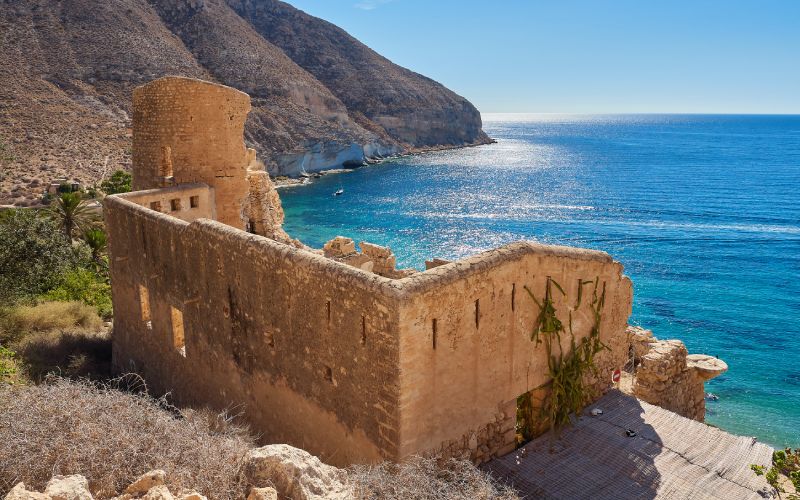 Also, the San Pedro cove is considered a free beach, that is, it is not nudist, but it is frequented by people who practice naturism. For this reason, it is common to see both swimmers with swimsuits and nudists.

Getting to San Pedro cove is part of the adventure

On the other hand, access is somewhat complicated and is not recommended for people with reduced mobility. It is reached through a rural mountain road that passes along the cliffs and there is a parking lot about two kilometers from the beach. From the parking lot to the beach you have to walk, but there is no shade, so it is advisable to go well protected from the sun in summer. 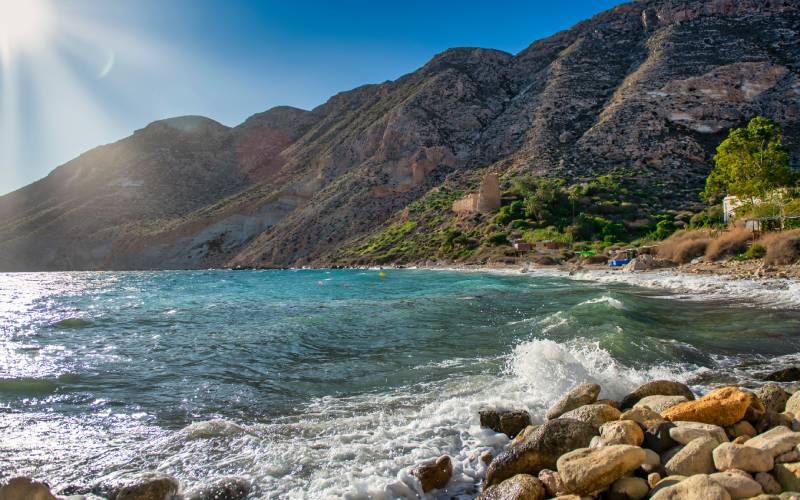 For those who prefer to arrive in a more comfortable and original way, there is the option of going by boat. It leaves periodically from the beach of Las Negras and arrives to the same sand of the San Pedro cove. As for services, there are none, so you should bring everything you need to spend the day there, from food to water, sunscreen and garbage bags.

The last hippie settlement in Spain

One of the curious things of San Pedro cove is that there is a community of people who live there all year round, despite being four kilometers from the nearest town. Although it may seem incredible, they live connected to nature and totally away from the rest of society and modernity. More than 40 years ago they began to live there looking for peace and harmony and at the time there were about 200 inhabitants, being currently about 50. 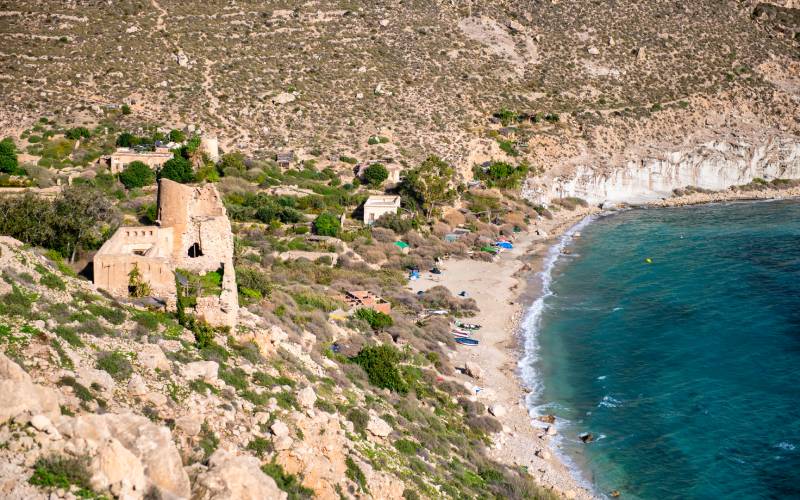 This community lives from making accessories made of leather and shells and selling food and drinks to tourists. Thanks to the materials of the area, such as rock, wood, cane and bricks, they have built their own houses there, both on the beach and deep in the valley. They are also totally self-sufficient, since they have a spring that serves as a natural water source and which they use to irrigate the vegetable gardens from which they feed themselves.

This philosophy of life is so attractive that in summer it fills with tents of people who also want to have that experience at least for a few weeks. While disconnecting from the stress of today’s world, they enjoy the wonders of this small paradise while living with the last hippie settlement in Spain. 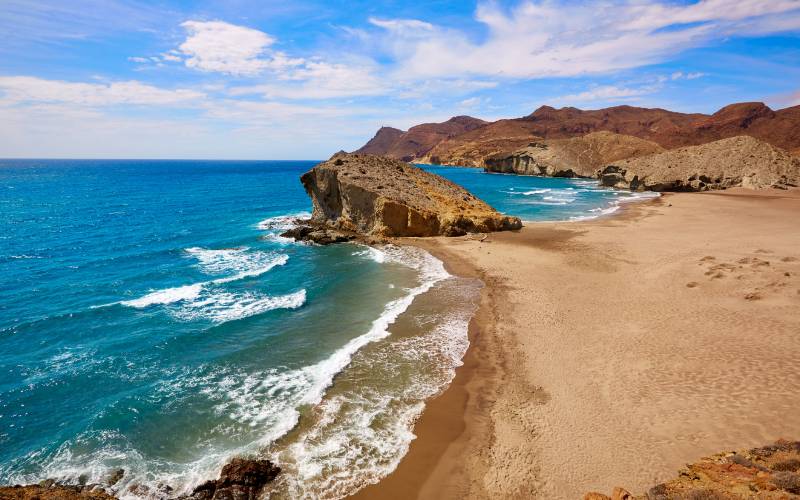 Finally, it should be noted that San Pedro cove is framed in an enclave full of beauty: the Cabo de Gata-Níjar Natural Park, one of the many in Andalusia. It is a natural space of about 50,000 hectares of extension and full of large cliffs, as its landscape is of volcanic origin.

Other beaches of great beauty that can be visited within the Natural Park Cabo de Gata-Níjar are those of Los Genoveses, Las Negras, Agua Amarga or Mónsul. For those who prefer hiking instead of going to the beach, the routes of Caldera de Majada Redonda, Cortijo del Frail-Montano-Hornillo and La Molata are very interesting options to discover the landscape of the area.

Active tourism is also very common in Cabo de Gata thanks to its varied landscape, with the possibility of diving, kayaking, horseback riding, canyoning or climbing, among other activities. As for villages, Nijar, Carboneras and San Jose are villages that every visitor should know.

In short, San Pedro cove has immeasurable beauty and where you can enjoy the disconnection, even if only for a few hours, from the outside world. A highly recommended getaway for all those who love nature and, why not, the hippie lifestyle.