Searching for secret spots in Andalusia can transform travelling to southern Spain into an addiction that is very difficult to get rid of. Discover, being amazed and enjoying special places is possible by travelling through this community full of colours and unique aromas. Its eight provinces mean eight essential stops.  The region is a cocktail of cultures based on an impressive geography. Each step is a landmark in a timeline set in a very distant past, passing through different times, towns and landscapes. A journey through these places, still unknown to many, will not leave anyone indifferent.

In the Upper Guadalquivir, Jaén, this fortress stands on a high promontory, looking out over land that was already inhabited in the Bronze Age. On its walls you can see traces of Mozarabic, Templar, noble and Castilian people. It was considered a village annexed to Cazorla, until the 14th century when the Archbishop of Toledo, Pedro Tenorio, granted it the privilege of Villazgo. 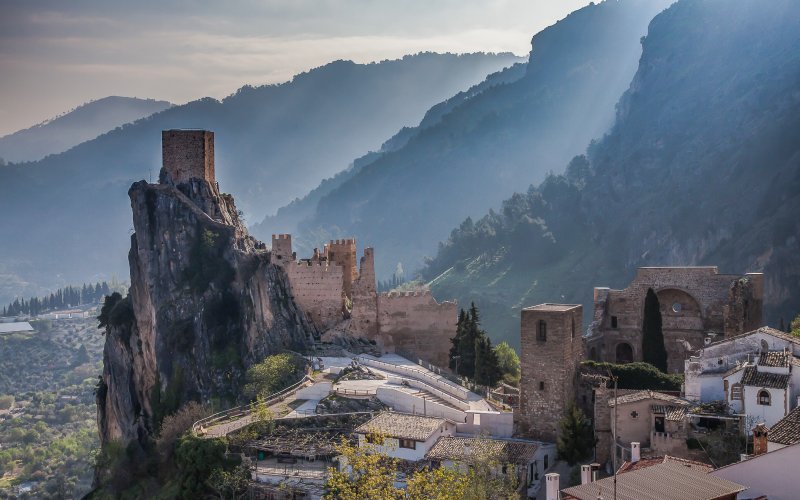 View of the Castle of La Iruela with the mountains in the background. | Shutterstock

From the castle, its keep, some walls and the remains of several towers resting on the rocky profiles have been preserved. The visit to the Castle of La Iruela can be made any day of the week. It is worth taking advantage of it to get to know the natural surroundings, as well as the ruins of the Church of Santo Domingo de Silos, whose foundations date back to the 13th century.

As part of the Route of the White Villages of Cádiz, it is a very special place. Its urban environment, integrated into the geological formations that surround it, has been declared a historic-artistic site. The layout, with its houses set among rocks and caves, is a monument in itself. The streets Cuevas del Sol and Cuevas de la Sombra or Las Herrerías are testimony to this. 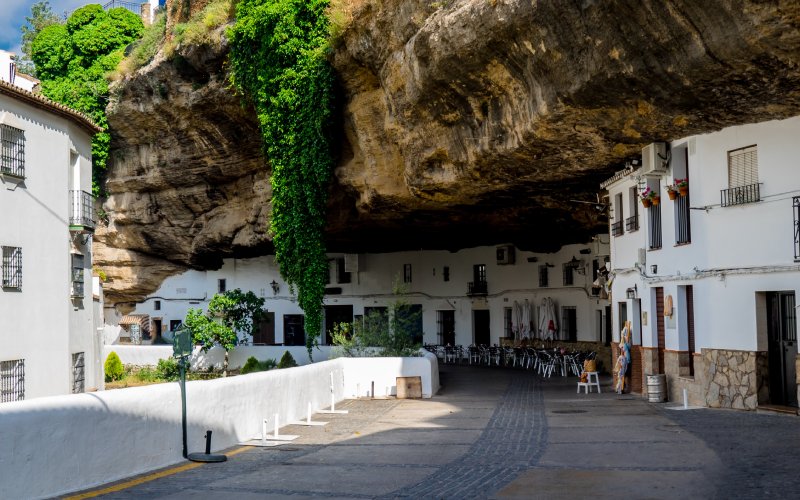 Houses in Setenil de las Bodegas, built in symbiosis with the geology of the area. | Shutterstock

A walk through the village reveals to the visitor a great wealth of heritage. The Hermitage of Nuestra Señora del Carmen, from the 18th century, the Church of La Encarnación or the Keep, previous to the reign of the Catholic Monarchs. The Casa de la Damita de Setenil is worth mentioning, as it houses an anthropomorphic Palaeolithic figure. A kind of ancient Venus, now an emblem of Setenil.

The mining village of Rodalquilar

In Níjar, on the lands of the Cabo de Gata Natural Park, is this old town built around the mining industry. It is one of the secret spots in Andalusia that deserves to be known. It is incredible to find such a picturesque enclave less than 50 km from Almería. As if it were a film, Rodalquilar played a leading role in the 19th and 20th century gold rush, as it had the only gold deposits in Spain. 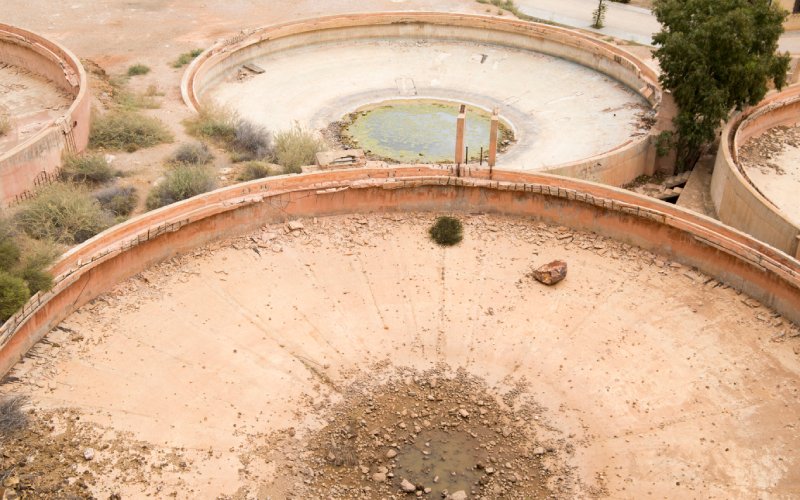 View of a gold mine abandoned years ago in Rodalquilar. | Shutterstock

It was a time of great splendour of which the only remaining witnesses were some stately, closed, abandoned mansions. They live together in this ghostly enclave, with small mining houses. After the visit you can rest in a beautiful beach, oasis in the middle of the Almería desert, El Playazo de Rodalquiar.

In the northern part of the central district of Córdoba is this quarter which is pure history. The name comes from the 13th century Church of Santa Marina de Aguas Santas, initially Visigothic and rebuilt according to the Fernandina aesthetic. It is famous for being the birthplace of bullfighting, represented in the sculpture by Manolete in the Plaza de los Condes del Priego. It also houses the Convent of Santa María de los Angeles, which houses the image of San Pancracio. A true gem of Andalusia. 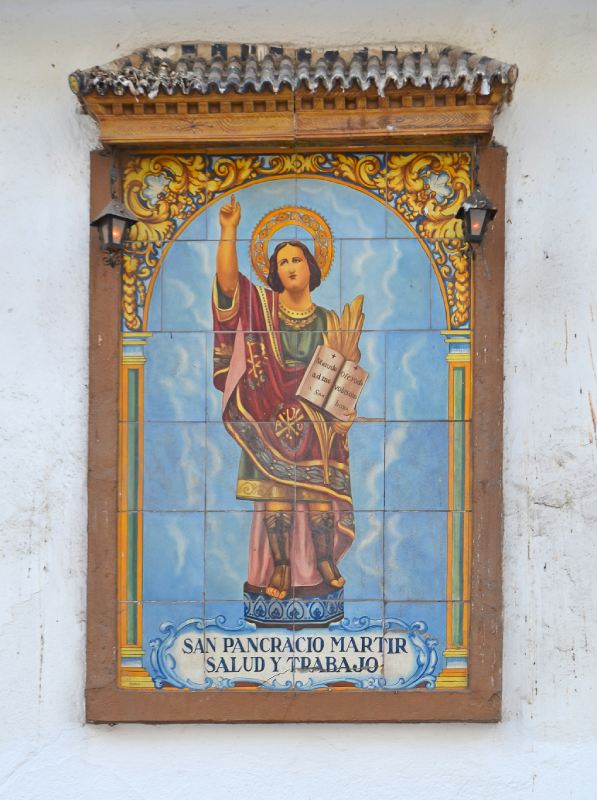 Detail of icon of San Pancrazio, in tiles, in the Convent of Santa Maria de los Angeles. | Shutterstock

The steps along its cobblestone path uncover treasures and legends. One of them tells of the death of a lady from Córdoba at the hands of her jealous husband, in the Torre de la Malmuerta. But there is much more to discover.

A few kilometres from Peal del Becerro, in the Sierra de Cazorla, is this underground burial chamber. Its situation, in the Cerro De la Horca, and its construction, form a place destined to eternal rest.

Replica of the interior of a room in the Sepulchral Chamber of La Toya (Museum of Jaén). | Shutterstock

This is an underground necropolis consisting of three naves, dating from the 4th century BC. The stones were carved in the same place where they lie. Inside, there are ashlars, benches and a continuous table. It was discovered at the beginning of the 20th century and many experts consider it the most important example of Iberian architecture on the peninsula. An authentic gem of Andalusia.

In Aroche (Huelva) there are the remains of two Roman population centres, Turóbriga and Arucci, which today form the Turóbriga Archaeological Site and the San Mamés Monumental Site. It is the only site that can be visited in the province and in it there are abundant remains and traces of its ancient inhabitants. They lived their time of splendour during the reign of Hadrian, in the 2nd century AD. And of those glorious moments there are still glimpses in its Forum, Baths, Market or in the Field of Mars. 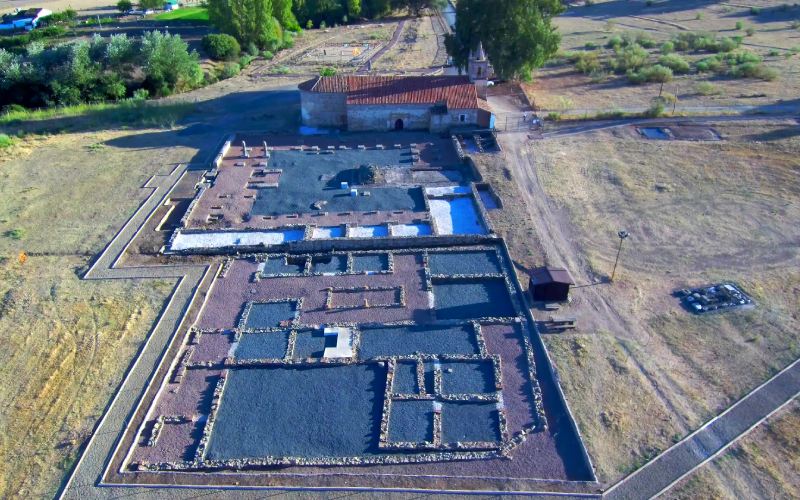 View, captured from a drone, of the Roman city of Turóbriga in Aroche (Huelva). | Shutterstock

On top of its old basilica (1st century AD) stands the Mudejar-style Hermitage of San Mamés. In the Archaeological Museum of La Cilla you can see various pieces. But to cross on foot the zone enjoying the landscape, Llanos de la Belleza, is priceless.

Hermitage of the Via Sacra

The Hermitage of the Via Sacra is located in the municipality of Osuna, Andalusia, about 80 kilometres from Seville. In the quarries of this Andalusian municipality, next to the edge of a cliff, remain the ruins of this hermitage built in the 17th century. In the lands of the ancient Urso, of Roman Hispania, this stone vestige remains, symbolizing the end of the celebration of the Stations of the Cross. 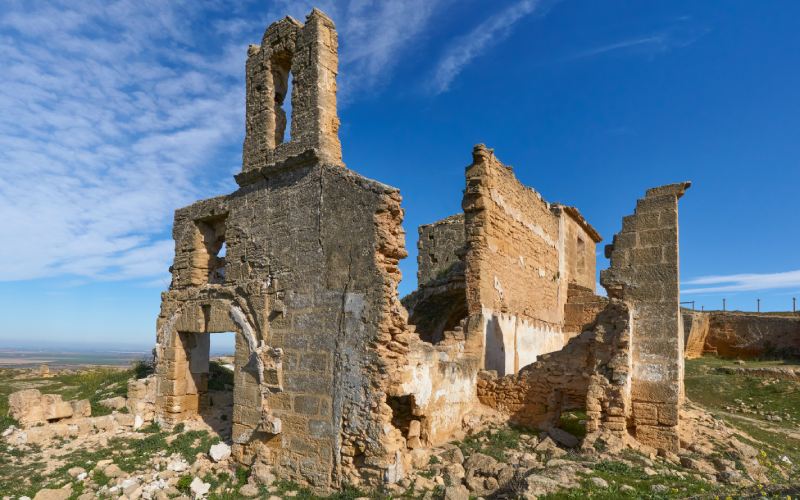 Ruins of the Hermitage of the Via Sacra, located in the quarries of Osuna, Seville. | Shutterstock

Around it, an abandoned quarry, converted into a sort of Spanish Petra, creates an almost cinematic setting. It experienced a period of great activity, thanks to the construction work carried out by the 4th Count of Ureña in the 16th century. Now the land is used as a stage for films, music videos and different events. The colouring of the rocky substrate creates a very special atmosphere. 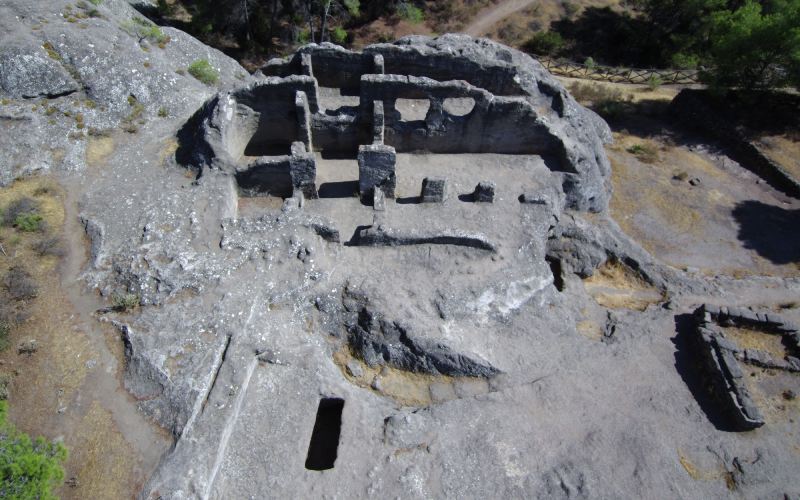 The remains of the Mozarabic city of Bobastro are located in the area of Las Mesas de Villaverde, in Málaga. At one time it was a walled enclosure that served as an offensive centre. The complex was made up of several buildings, a fortress, walls, a necropolis and several churches. The rebellious population, inhabitants of houses and caves in the cliffs, helped to build it.

Nowadays the visit is a valuable opportunity to discover examples of exceptional architecture. They are buildings that are intimately linked to nature, which blend in with the landscape that welcomes them. They can be seen on guided tours that go through the whole complex, accompanied by explanations and stories of their history.

This 18th century watchtower is one of the mysteries of Cádiz to discover. It is very difficult to situate at first sight. It is only possible from heights and privileged positions. The tower is located on the roof of number 13 Calle José del Toro. Its history highlights its special and anonymous appeal; highlighted by the fact that it is the only octagonal tower in the whole city. 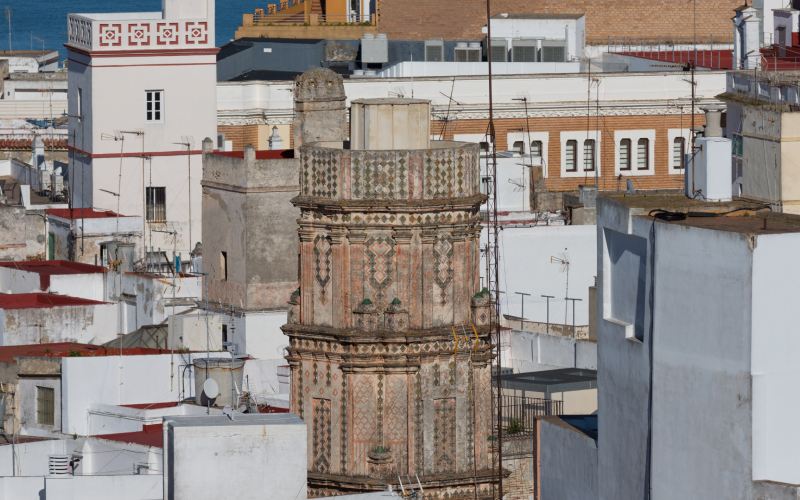 Details of La Bella Escondida, emerging between the roofs of the city of Cádiz. | Shutterstock

According to the legend, a saddened father ordered it to be built for his daughter, who was confined in the Convent on Calle Feduchy, as a message of love from his family. Today, La Bella Escondida is still waiting to be contemplated; among the roofs wrapped by the wind and the light of the bay.

El Bañuelo baths are the oldest public Moorish baths (11th century) and represent an important mark of Granada‘s Muslim era. They have survived the destruction ordered by the Catholic Monarchs, and even the construction of a house on them, almost since the Christian occupation. 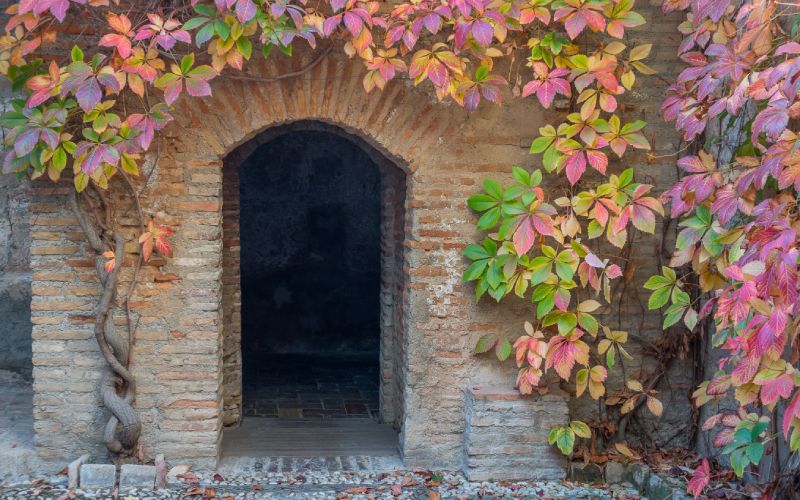 Access door to the Moorish baths El Bañuelo, near the Alhambra, in Granada. | Shutterstock

In the Carrera del Darro, very close to the Alhambra, they have stood the test of time, since 1918 as a National Monument. Its access, through a private house, leads to a rectangular floor plan and rooms with octagonal and star-shaped skylights. Its state of conservation and its ability to isolate itself from the outside and from the clocks is marvellous.

To discover a new spot, a mystery, a special place, is always a magnificent incentive to undertake a journey. And even more in the beautiful community of Andalusia. Mosques, palaces, Jewish quarters, cathedrals and squares. Orange blossoms, tiled courtyards and white houses. Geraniums, castanets, natural parks, sea and a rich cuisine to taste. Andalusia has a lot to discover.