“In Jánovas what has happened nowhere has happened, people were thrown out before the work on the reservoir began. Why did people bother there? Today it would be unacceptable for this to happen, but at that time many were illiterate and were told that it would change their lives for the better. We have always wondered, if they were not going to do the reservoir, why did they throw people out?” It is a question that haunts one of the grandchildren of the neighbours who had this piece of Aragón expropriated, Óscar Espinosa.

This part of our Revenant Villages belongs to Huesca. Specifically, it is located in the basin of the Ara River, called Valle del Ara. This environment of glacial origin contains a fauna and nature that are part of the mountain ecosystem of the Pyrenees. It was one of the first areas in Spain to be declared a Biosphere Reserve by UNESCO in 1977. 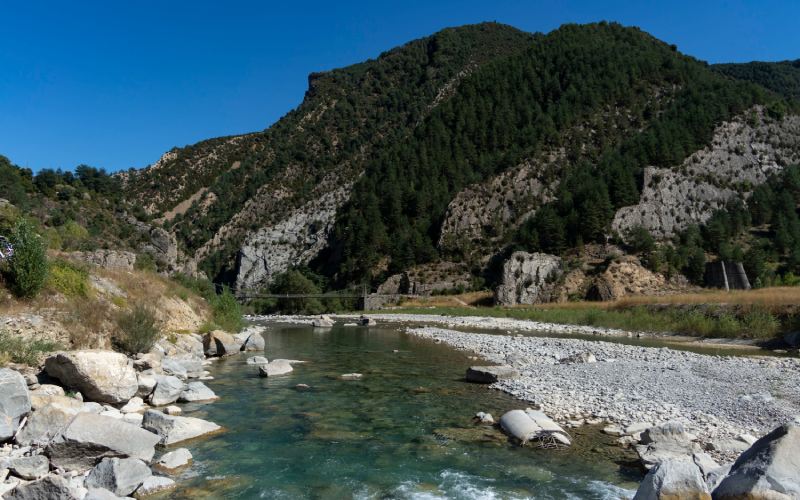 It has a bridge that is considered a monument. It is one of the few in Europe that still has part of its original 19th century structure. Specifically, it still has the wiring used in its construction in 1881. It is located on the slope of the Ara Valley, already mentioned. Right at that point the dam of the reservoir was going to be built, forcing the neighbours to leave their homes.

It is because of this reservoir that the struggle of the local inhabitants to remain there begins. The construction of the reservoir was approved in the 1950s. It was published in the Boletín Oficial del Estado (Official State Bulletin) on 14 April 1951 and was of public use. The first step to reach this point was taken by José Durán. In 1911, he requested the lands of the Ara Valley on which Jánovas, Lavelilla and Lacort are located.

He intended to use the Ara River pass over the site for marketing and energy production. The hydroelectric company in charge of the construction had until 1971 to carry out the works. Therefore, in the 1960s, the real battle for the locals began. It was in this decade that the town went through its hardest stage, the expropriation of the land. 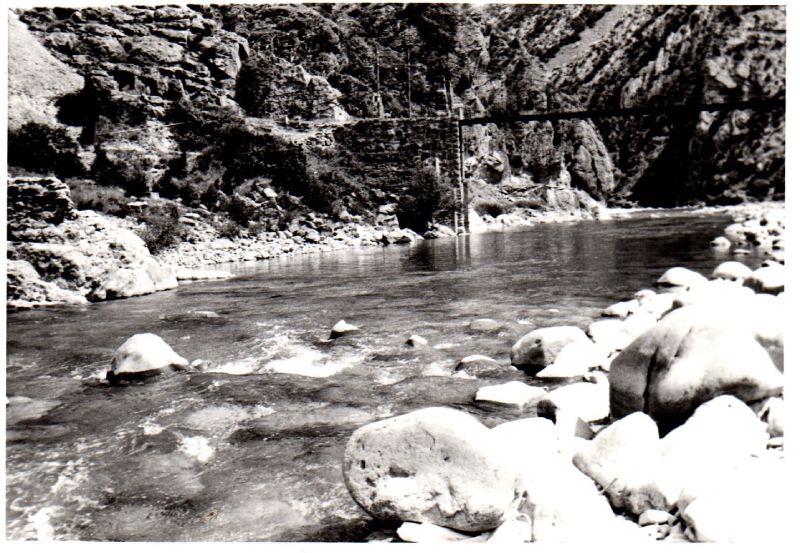 The neighbours who found a new place sold their homes and land, and left Jánovas. A decision forced under all kinds of coercion by the company that owns the land. Among the hardest ones, the detonations with dynamite to knock down the empty houses stand out. They do this without prior warning, so that it will be unsuspected. Amidst the chaos of the explosions, the inhabitants fled in terror to take refuge from the elements flying over their heads.

Three houses were blown up in this period of time. Casa Sarrete, Casa Cahaquis and Casa Marité were reduced to mere ruins after the dynamite was applied. The aim was none other than to spread fear among the neighbours, to drive them out of their homes for good, to obtain the land and to start the work.

Most of them succeeded. Óscar remembers the situation of his family, which like many others, had to abandon their roots. “I never knew my grandfather, but I have been told that, like the rest of Jánovas’ neighbours, he was reluctant to leave. They left after the expropriation in Barcelona and it didn’t last a year. Like many of Jánovas’ grandparents, he died of grief”. 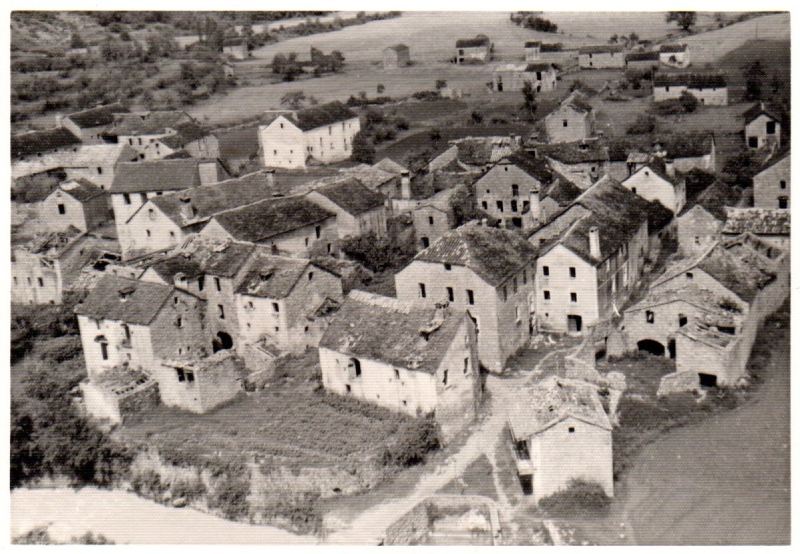 Despite the pressure, two families had not left the village in the 1980s. They are the only neighbours of Jánovas. María Pueyo, since 1969, only visited the place in summer to spend her holidays. She also went to Barcelona that year after becoming a widow. Antonio, her husband, was the last neighbour to die in this town in Huesca. Unlike the rest of her neighbours and relatives, she was not able to have the mass and the funeral in the place where he lived. The cemetery and the church had already been expropriated.

The other family that lived in the village in the 80s were the Garcés. Emilio and Paca were a humble married couple, without resources to be able to leave the village and look for a new future. He, a shoemaker by profession, stopped receiving income when the neighbours left Jánovas. He thus began to work for the State Forestry Heritage. On one occasion they offered him a transfer to another place. Without trusting the proposal, both of them continued there. They would not leave their real home. 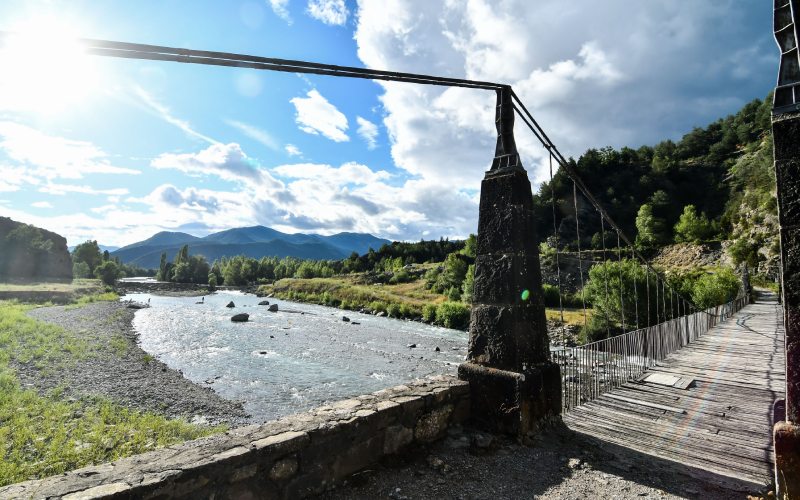 19th century bridge over the Ara River in Jánovas. | Shutterstock

At least, they did not do so until 1984. They moved then to Campodarbe, but there they found only an old house, almost in ruins, and barren land. Regretful, they returned to Jánovas, but their old house is now uninhabitable. The hydroelectric company took care of leaving it in that condition so that they could never go back.

In Campodarbe they repaired their house, making it their permanent residence. “The Garcés family have become an example of struggle, of decency for dignity. Emilio and Paca are a symbol for us, because they are the ones who really endured,” says Espinosa.

Reaching the other side

The Secretary of the Environment Ministry, Juan Luis Muriel, signed the negative environmental impact statement. He did so in 2000 following reports from workers who came to study and find out about the condition of the land. Despite the negative result, it was not until 10 February 2001 that it was officially published in the Official State Gazette, following pressure to change the opinion.

By 2003, the licenses for the construction of the reservoir had expired and a couple of years later the urbanization was denied by the Act modifying the National Hydrological Plan. Thus, the battle of the residents of Jánovas begins again. In 2006, the affected neighbours’ association created by the relatives of the Jánovas people filed a complaint before the Environment Ministry. They claimed for the damages caused in the last 60 years. 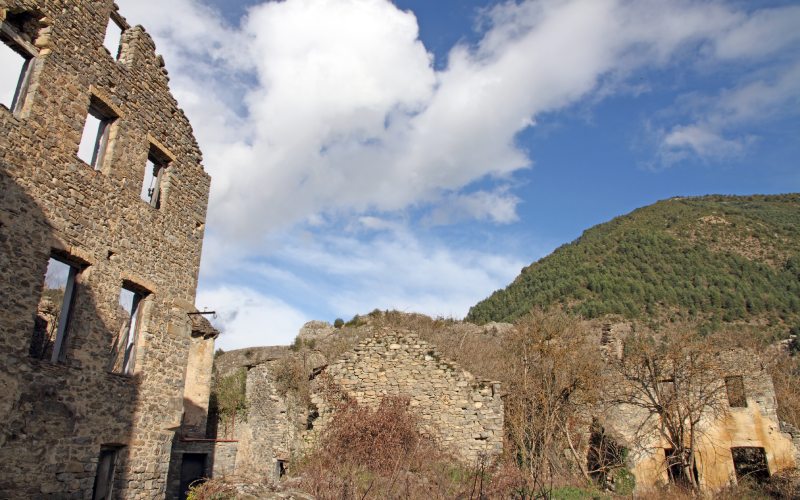 Remains of the Jánovas farmhouse. | Shutterstock

The reservoir was never built and they requested the return of the houses that were taken from their families in the 1960s. Well, what they are asking for is the land, because all that remains of the houses are ruins. The petition was filed in 2008, but the process was prolonged and the first case was not resolved until 2011. The next ones, in 2013.

As a claim of the people for the delay of the concessions, the construction of the school started in 2012. “It is more complicated because they are private investments. Although all the residents of Jánovas help each other a lot. We started with the school and spent years there. We built it over the weekend, when the neighbours worked there,” says Espinosa.

After long meetings and discussions between the families and the electricity company, the neighbours managed to recover the land. However, after paying the fees agreed with the company. This is something that some of the neighbours did not like, and asked for the land to be returned free of charge.

Once the land had been recovered, the first reconstruction began in 2015. Once again, the financing is private, that is to say, it is the family members themselves who assume the cost of building their homes. They only receive money from the Government of Aragón for the conditioning of the mountain and the access roads.

Currently, the basic supplies needed to live are already available in Jánovas. The underground cabling has been installed to facilitate this. In spite of this, there is still no neighbour living there. The village is under construction and will have inhabitants as the construction of the houses is completed again. 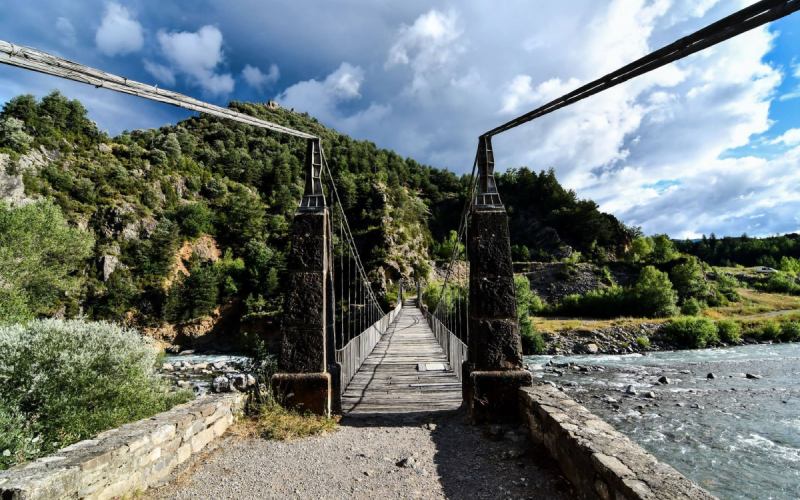 The struggle is already on for the third generation, the grandchildren. They are confident of their early repopulation. They see in young people a desire and willingness to return to the rural world. For the older neighbours it is a synonym of hope and happiness. They see the end of so many years of battle very near. They will have managed to honour the cause for which their relatives fought so hard.

“What differentiates Jánovas from other towns is that we have always remained united because we have suffered the same thing. The neighbours have never stopped going there even though the village was in ruins. We are representing the struggle that all our ancestors have had. Out of respect for everyone, we would do anything to recover and raising the village again” declares Óscar Espinosa representing the third generation.

The bridge has already been crossed. The neighbours and Jánovas do not give up.