For six days, the city of Seville gets dressed up in frills for one of Spain’s biggest celebrations, known worldwide

Back in the 19th century (1846 to be specific), two businessmen based in Seville came up with the idea to hold a three-day livestock festival in the city. With strong support from the local peasants and farmers, Narciso Bonaplata (from Catalonia) and Jose María de Ybarra (from the Basque Country) requested permission from the city government to hold their festival on April 19th, 20th, and 21st. After many difficulties, Queen Isabella II of Spain granted Seville the right to celebrate a festival in March of 1847, and the first April Fair took place the following month.

It started out as a livestock festival that took place outside of the city, but it quickly gained a reputation and became more of a recreational event. The fair continued to grow until in 1914 it was extended to five days instead of three (a sixth day would be added in 1952). By 1920, the present-day essence of the fair was established, with the layout of casetas (tents) and a festive character.

The festival kicks off one or two weeks after Holy Week. It starts on Monday at midnight with the traditional “prueba del alumbrado” (“test of the streetlights”), when the 350,000 lights illuminating the fair grounds are turned on for the first time, adorning the city with red, green, and white paper lanterns. These colors are also used to decorate the casetas that are set up all over the Real de la Feria (Fair Grounds), the space where the festival takes place today, which is divided into streets named after famous matadors. This ceremony marks the start of six days of partying, good eats, sevillanas (song and dance performances), bullfights, and plenty of art.

Going from one caseta to the next inside the Fair Grounds, you can witness the essence of Andalusian culture at its best. People wear traditional clothing, and the ladies are especially well-dressed with their frilly trajes de faraeles riding aboard the traditional horse-drawn carriages that are authorized to enter the fair. When it comes to food, the night of Monday into Tuesday is officially known as “la noche del pescaíto” (fried fish night). Throughout the entire festival, you can get all kinds of fried fish as well as seafood, ham, and various types of embutidos. All of this can be washed down with beer and wine from all over Spain, but the specialties are fino wine from Jerez, manzanilla (a type of sherry) from Sanlúcar, and rebujito (carbonated manzanilla). However, to enter the private casetas you need to be invited or go with a member. If not, you can always go to the public and municipal casetas. Many of the tents have a tablao (stage) set up inside where sevillana songs and dances are performed to entertain spectators while they eat and drink.

A bullfighting festival puts the final touch on the celebration. After Easter Sunday, bullfighting season begins in the bullring, known as La Real Maestranza. As this is one of the most significant bullrings in Spain, top-ranking matadors participate in this festival, which harkens back to the celebration’s origins as a livestock festival. The April Fair wraps up on Sunday with two bullfighting sessions. Later, at midnight, the lights are turned off and the event is closed with a colossal fireworks display. The crowds will have to wait until next year to return to the fairgrounds full of casetas, trajes de faralaes, and fried fish.

Feria de Abril
It may interest you...

Festive events throughout the month of May It is difficult...
>> More information

The night of Saint John’s Day is associated with the...
>> More information 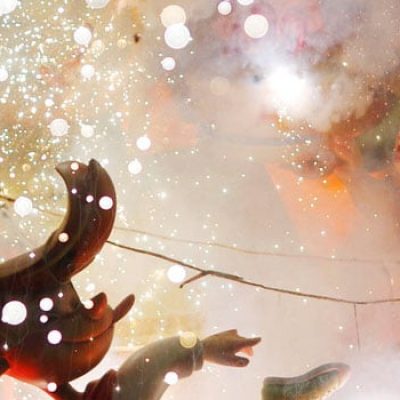 Las Fallas in Valencia draws over a million visitors for...
>> More information