The first two Sundays in September in the incomparable setting of San Sebastián’s La Concha Bay, the Kontxako Bandera, or Bandera de la Concha, takes place. This rowing regatta with more than 130 years of history was held for the first time in 1879 in tandem with the Festival of San Sebastián.

The competition draws thousands of people each year who come to enjoy the spectacle put on by the traditional boats known as traineras. This is a unique event for sports lovers and for the entire general public, as good vibes and celebration fill the streets of the city during the two days of the race.

In 2018, the Kontxako Bandera, informally known as the “rowing Olympics,” will take place on September 2nd and 9th. The competition follows the traditional format of two rounds with four boats each. The route is three nautical miles long, but the boats only turn around once so they only travel two lengths instead of the typical four. The starting point and the finish line are located near the beach, and the exterior ones are located beyond the bay.

In the 2018 Bandera de la Concha, the same cash prize will be awarded in the men’s and women’s categories for the first time. This only affects the first three places, since from fourth place on the amounts have always been equal. However, last year the winner of the men’s category (Orio) took home 24,000 Euros compared to the 15,000 Euros that the first-place women’s team (San Juan) won, the same amount awarded to the second-place men’s team (Urdaibai). Women have been allowed to participate since 2008.

We encourage you to go to the Bandera de la Concha, a spectacle that combines adrenaline and tradition. The atmosphere is exceptional and the setting is unparalleled.

If you want to know what to do in San Sebastián, we’ll tell you about it here.

If you want to know where to eat and where to stay in San Sebastián, take a look at our pages of recommendations. 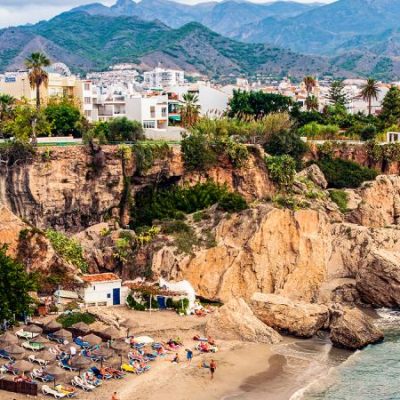 In the south of Spain we find the fishing villages…