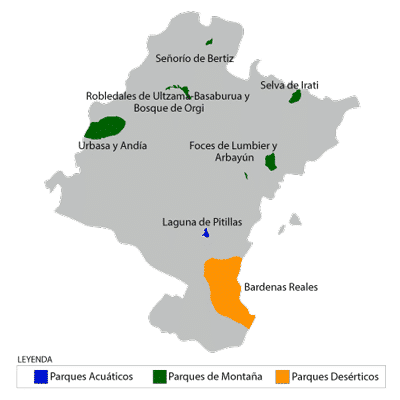 In the midst of the Ultzama Valley north of Pamplona lie the oak woods of Ultzama and Basaburua, declared a Site of Community Importance. This space contains the Orgi Forest, 80 hectares of land protected in 1996 as a Natural Recreational Area. The woods encompass an extraordinary group of hundred-year-old oak trees. The French route of the Camino de Santiago passes by this natural space.

This natural space centers around the Ultzama, Arkil, and Basaburua Rivers, making up a terrain of soft slopes and meadows in which the oak trees rise as the main attraction. The forest contains some isolated exemplary trees classified as natural monuments, as is the case for the trees known as Jauntsarats and Eltzaburu. In the southern part of the complex you’ll find the Orgi Forest, one of the few humid oak forests that remain in Spain. After overcoming periods of deforestation, the forest has been continuously regenerating itself, coming to be defined as a place of special natural interest which contains various hundred-year-old oak trees and a small saltwater pond.

Vegetation: In addition to the common oak tree, which is native to the area, the forest also contains American oak and, in lesser quantities, other species such as beech, elm, maple, fern, heather, juniper, and other types of bushes. The Ultzama and Basaburua Valleys are nesting places for a multitude of birds, such as the golden eagle, booted eagle, kite, accipiter, sparrow hawk, owl, kingfisher, blue tit, or coot, common in this region of Spain. The largest mammal populations are the wild boar, deer, and fox. The humid areas are also home to various species of reptiles and amphibians.

The Orgi Forest has three routes that go around its terrain: the paths of the labyrinth, the road, and the forest. In addition, the rest of this space offers a multitude of fun activities including hiking, cycling, and visiting the towns found in the surrounding valleys.

How to get there: The town of Lizaso is the center of this space which is found a few kilometers from Pamplona. To get there from the capital of Navarre, take road N-121-A and then take the detour on NA-411 in the direction of Ultzama Valley.

Below are some recommendations of places to eat and sleep around the oak woods of Ultzama and Basaburua and the Orgi Forest.