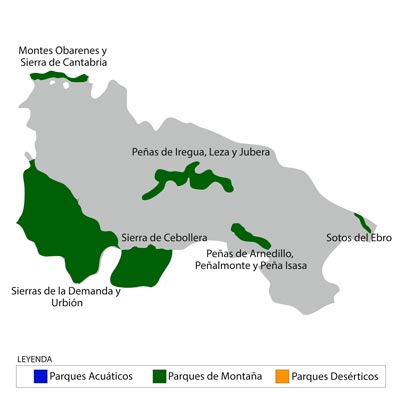 The Rocks of Iregua, Leza, and Jubera are one of the most popular natural spaces in La Rioja. The three adjacent spaces are nearby the city of Logroño and contain the valleys and streambeds of the three aforementioned rivers, a total of 8,410 hectares of land declared a Site of Community Importance in 2003. Additionally, part of its land is included in the Biosphere Reserve of La Rioja.

The popular Rocks of Iregua are located in the geological transition zone that separates the Ebro Valley from the Iberian System. Its orography is the result of wind and water erosion, forming a unique steep landscape that is marked by a series of slopes, cliffs, and gorges. It contains beautiful and spectacular geographical features, including Garganta del Leza, which is some six kilometers long and nearly 700 meters high. The Rocks of Iregua also have the attraction of El Torrejón waterfall. The Rocks of Iregua, Leza, and Jubera also contain interesting cultural values, such as their architecture and archeological remains.

The vegetation of the valleys of the Rocks of Iregua is made up of extensive oak forests at the lower elevations, while in areas of higher altitude you can find beech forests. Regarding the fauna, on the cliffs of the Rocks of Iregua, Leza, and Jubera there are species typical to the skies of northern Spain, including golden eagles, falcons, and vultures. In the three rivers there are trout, while on the riverbanks there is an abundance of wild boars as well as some otters, Pyrenean desmans, and European minks.

Itineraries and activities: Various trails go through the area of the Rocks of Iregua that allow visitors to thoroughly explore the space, going to all its corners and through the small centers of population in the area. Certain sections of the Roman road of Iregua stand out. Specifically, the canyon of the Leza River is a common spot for canyoning, the most spectacular form of active tourism that can be practiced at the Rocks of Iregua.

How to get there: Road N-11—which joins Logroño and Soria—goes through the Rocks of Iregua reserve following the course of the river. The Leza Valley is accessible by way of the LR-250. Finally, road LR-261 goes into the Jubera Valley.

Below are some recommendations of places to eat and sleep around the Rocks of Iregua, Leza, and Jubera.