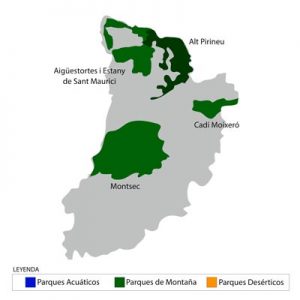 Aigüestortes i Estany de Sant Maurici National Park was created in 1995. Its 14,119 hectares make this unique National Park of Catalonia one of the most representative natural areas of the community. In addition, it has a peripheral area of special protection covering more than 26,000 hectares.

Formed by the valleys of the Rivers Sant Nicolau and Escrita, water is the main protagonist of an area full of lakes, meanders, waterfalls and peat bogs from the aforementioned rivers and their tributaries. With all the attraction and natural diversity typical of the Pyrenees, the park’s main tourist attractions are the Sant Maurici pond and the Aigüestortes meadow. The first is a huge stretch of water with easy access from the River Escrita, which is protected by the imposing presence of the Serra dels Encantats, at an altitude of 2,747 metres. For its part, the Aigüestortes meadow (Aguas Tortuosas in Spanish) is a large plain pierced by the sinuous meanders of the Sant Nicolau Riveru.

The flora of the Aigüestortes park is mainly composed of black pine, oak, ash and beech forests. Its fauna also responds to the characteristics of the high Pyrenean mountains, finding among its most representative species the capercaillie, the golden eagle, the bearded vulture, the wild boar or the roe deer.

The maximum height of the Aigüestortes Park is 2,982 metres from the Peguera peak. All the land of Aiguestortes Park has a wide and well-defined network of paths. The Aigüestortes i Estany de Sant Maurici park itself organises excursions and occasional activities.

Most common accesses to the Aigüestortes park are from the towns of Pont de Suert, Boí and Espot. The most common way to get there is by car, and for this purpose free car parks have been set up at the main entrances to welcome the large number of visitors from all over Spain and France. Another option is to get there by bus, taking one of the lines that operate from the surrounding towns.

Catalonia, national park, natural park
It may interest you...