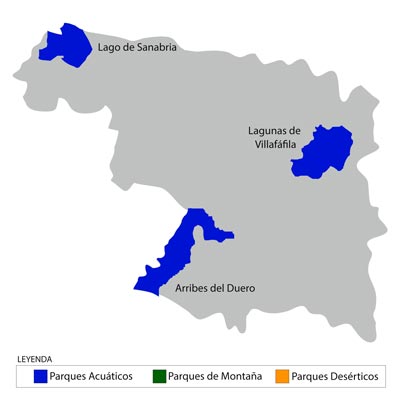 The Sanabria Lake Natural Park includes 23,365 hectares in the westernmost part of the province of Zamora.

It was created by the Spanish Government in 1978, although it already had some protection since the 1940s.

The Sanabria Lake Natural Park is a vast glacial landscape where there are cirques, valleys, moraines and lakes from ancient times.

The whole area is located around the Sanabria Lake, that is the biggest lake of glacial origin in Spain. It has an extension of 318 hectares and a maximum depth of 53 metres.

The lake of Sanabria has several beaches and it is the main tourist attraction of the area since bathing is allowed. The main river basin of the area is that of the Tera river. It forms on its route a narrow gorge of a great landscape value that goes to other points of interest such as the waterfall of the Ninfas or the cave of San Martín.

Among its cultural values, it is worth to mention the Romanesque monastery of Santa María and the beautiful Medieval city centre of Puebla de Sanabria, located 12 km far from the park.

The oak tree is the plant species predominant in the park, although there are also other species such as the ash, the willow, the chestnut tree and the holly tree. On high heights there is thicket typical of the mountain.

The water of Sanabria Lake is filled with trouts, much appreciated by fishing enthusiasts. The park has numerous specimens of otter, roe deer, wild boar, golden eagle, peregrine falcon or eagle owl. One of its most representative animal is the wolf.

The Sanabria Lake is also a leisure centre during the warmest months. In addition to bathing in summer, canoeing and pedaloing are permitted. There are also activities such as the navigation on board of an aeolic-solar Catamaran.

There is a network of trails formed by different paths that route the most interesting nooks of the area. Some of them are the Senda de los Monjes, that has really good views to the lake, the Cañón del Tera and Cueva de San Martín or Las Lagunas de Carros y Sotillo.

The most common access to the Sanabria Lake is from the road A-52 (that joins Madrid with Vigo) taking the diversion towards the ZA-104 in Puebla de Sanabria. The Sanabria Lake has public car parks. You can also get to the surrounding villages by public transport.