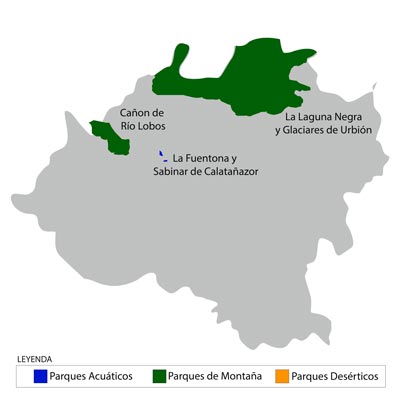 The Cañón del Río Lobos Natural Park takes up 9,580 hectares and it is about 25 kilometers long.

It forms a kind of axis that consists of some lands from the northwest of the Province of Soria and the south west of Burgos.

It is located in a low height mountain range in the middle of the northern third of Spain, delimiting an imaginary border between the Cantabrian Mountains and the highest part of the Duero plain.

The Cañón del Río Lobos Natural Park is mainly made up of a big limestone canyon that has been formed through the centuries by the effect of the river on the stone. The continual action works in two different ways: erosion and dissolution.

This latter is the one that has changed the landscape more gracefully. It has formed attractive concavities whose colours are due to the minerals that contain the water and the rock in the wall interior flanks. The Natural Park Cañón del Río Lobos is found in a rugged terrain that increases the beauty of the location.

Related to its flora, its most representative tree is the Juniperus thurifera, but there are also pine groves, Portuguese oak or Valencian oak, holm oaks, black poplars and willows. The volume of the river is in some stretches filled with water lilies and other floating plants.

The fauna of the Cañón del Río Lobos Natural Park is usually not visible during the daylight hours as there is no much space to hide in the narrow canyon. There are roe deers, wildboars, foxes, hares (sometimes you can also see squirrels). We recommend you to take binoculars since in its crags inhabit griffon vultures, eagles, common kestrels and peregrine falcons. It is easy to see them flying or in their nests.

There are several marked itineraries to walk around the Cañón del Río Lobos Natural Park such as the Sendero Ibérico Soriano, the Ruta del Río (that cover the canyon following the riverbed) or the Ruta de las Gullurías.

Furthermore, the Natural Park has inside or in the outskirts important heritage actives like the castle of Ucero and the chapel of San Bartoolomé (linked to the Templars). In the village of Ucero is the cave of the Galiana Baja.

The south entrance to the Natural Park is located in the road SO-920 between Burgo De Osma and San Leonardo de Yagüe. We do not recommend the northern entrance because of the road signs. You should leave the car in the village of Hontoria del Pinar (Burgos) and go to the south.

A third option is the road SO-934 that crosses the park in the middle of its route, between the villages of Guijosa and San Leonardo de Yagüe.