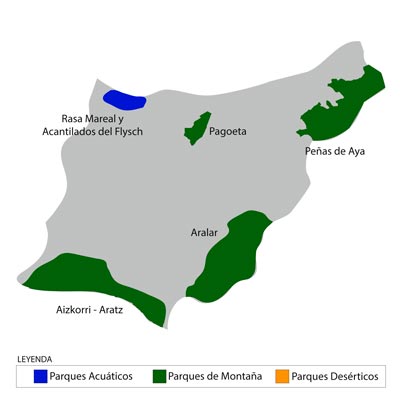 The Natural Park of Aizkorri – Aratz, declared in 2006 by the Government of Spain, extends to over 10,971 hectares of land. It is located between the south of Guipúzcoa and the north of Álava, its peaks are the highest in the Basque Country and great heritage landmarks will sure leave you breathless.

The park is actually a large limestone rock mass on which erosion has carved a spectacular karst landscape of sinkholes, channels, cliffs and ridges, a typical landscape of the Basque Country. The soils of Aizkorri – Aratz hide an extensive network of underground waters that flow through caves and channels to surface at various points. The Aitxurri and Aizkorri peaks (1,551 and 1,544 meters respectively) not only are the highest peaks in the Basque Country but have also become a benchmark for mountaineering in the region. Aizkorri – Aratz has also also a great cultural values ​​with many archaeological sites, dolmens, mounds and other megalithic monuments of the prehistoric era.

Historical heritage. The Sanctuary of Arantzazu and the Tunnel of San Adrián are located within the park.

Flora. In addition to the grasslands of its higher areas, the park has a hillside vegetation composed of forests of beech and oak trees abandoned in colorful plants, characteristic of high mountain flora. The beech of Altzania, one of the most extensive of the autonomous community, is really a must-see.

Fauna. The fauna of Aizkorri – Aratz is mainly composed of raptors of the mountains of northern Spain which is their usual environment: the griffon vulture, the booted eagle or the peregrine falcon. As for the mammals, feed the wild boar, the marten and the wildcat.

Itineraries. Aizkorri – Aratz has a wide network of signposted roads perfect for hiking. The surroundings of Zegama and the Tunnel of San Adrián are one of the most popular areas for this activity. In addition, in its highest peaks, going hiking is also common as well as other mountain activities.

Access. Aizkorri – Aratz is framed by AP-1 and A-1 highways. From Guipúzcoa, you have access to the park through Zegama, towards the Tunnel of San Adrián, or from the town of Oñati by the route towards the Sanctuary of Arantzazu. From Álava, you take the A-3012 highway that passes, among other places, through Zalduondo.

Some recommendations on when to eat and sleep in Aizkorri – Aratz.

Other Natural Parks that may interest you...

Aizkorri
It may interest you...